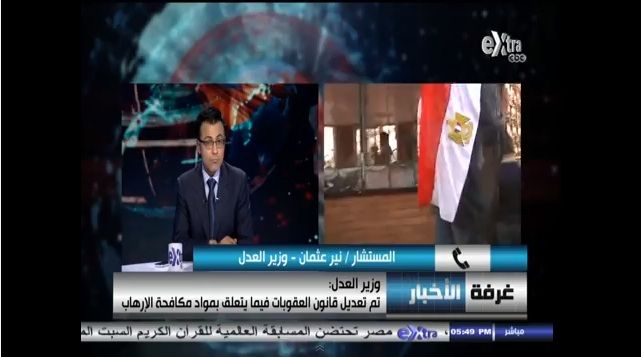 The Cabinet is in the process of approving two counter-terrorism bills that some say could severely erode civil liberties in Egypt.

The first would amend certain provisions in the penal code’s definition of terrorism, while the second would govern counter-terrorism procedures.

Earlier on Thursday, Justice Minister Nayer Osman had said that the Cabinet had approved both bills in a meeting in an interview aired on the privately owned CBC Extra satellite channel.

All media outlets began reporting that the draft laws had in fact been approved, the state-owned news site Ahram Gate then reported that the bills had in fact been sent back to the State Council for review, delaying Prime Minister Ibrahim Mehleb’s final legislative approval.

The details of the laws are still unclear, as the text is not available for circulation. In his interview with CBC, Osman said that the details of the laws would be made public after their approval, clarifying only that the bills would extend the government’s powers in cases against terrorism, legalize more methods to track terrorist acts and stipulate more counter-terrorism procedures.

Mohamed Zaree, Egypt program manager at the Cairo Institute for Human Rights Studies (CIHRS), obtained a copy of the bills on March 20, and told Mada Masr that he believed the bills the Cabinet discussed on Thursday were the same as those he reviewed.

“It [the Cabinet] doesn’t need to issue a new law, since the police and the Armed Forces are already incompetent in dealing with terrorism acts,” Zaree added, pointing to the bombing of the Cairo Security Directorate shortly after an attack on the Daqahlia Security Directorate last January.

“The government didn’t take any steps or make any investigations to prevent the reoccurrence of these terror attacks,” Zaree argued.

However, the justice minister claimed in his interview that security forces are now better equipped than they were back in January, and that their abilities are improving with time.

Zaree strongly condemned several articles in the first draft law he reviewed, claiming that it broadens the definition of a terrorist act to such an extent that it could encompass “crimes and even legal activities that do not relate to terrorism, including terms which are difficult to define legally such as ‘severely undermining public order,’ ‘subjecting the safety, interest, or security of society to danger,’ ‘disrupting the authorities from carrying out some of their activities,’ ‘subjecting the lives, rights, or freedoms of citizens to danger,’ ‘preventing educational institutions from carrying out their work,’ and ‘[carrying out] acts which seek to hinder the implementation of the constitution or the law’.”

Acts that are determined to have harmed communications systems, financial systems or the economy could also be labeled as terrorist according to this proposed definition, Zaree said.

Given this broad definition, political groups, activists and civil society organizations could potentially be targeted under the law, he warned.

“It is clear that the principle aim of this bill in its current form is not to counter terrorism, but rather to restrict such groups, movements, and organizations from existing. This provision could easily be interpreted to punish individuals or organizations which call for constitutional or legal reforms, even if done peacefully,” Zaree claimed.

The second bill currently on the table would expand executive powers, authorizing the president to enforce exceptional security measures without parliamentary approval and to implement special procedures by oral order, which would only need to be supported by a written decree after eight days, according to Zaree.

The bill would also give the prosecutor general the power to reveal the bank details of individuals and organizations without court order, which Zaree called a violation of personal freedoms.

Further, the draft law would legalize detaining individuals without charge or even arrest warrants, and security forces would not be compelled to immediately reveal the reasons for the detention, Zaree said.

Although the law would stipulate that every detainee would have the right to appear before the prosecutor within 48 hours of his or her arrest, the bill does not stipulate any legal obligation on the part of the police to declare the arrest on time, which Zaree warned could lead to prolonged arbitrary detentions.