Band of the week: Islam Chipsy

Islam Chipsy stands behind a Yamaha PSR OR-700 keyboard laying down a wild, coiling melody inside one of the recording rooms at 100Copies.

A handful of mahraganat musicians stand around him, and Sadat breaks out into a freestyle rap while Chipsy slams the keys rapidly as if playing a percussion instrument. He seems to have grown extra extremities to drum on the keys with a strange accuracy, without faltering, while bending the pitch of the notes with a joystick-like control on the left side of the keyboard.

Five minutes’ worth of this raucous energy and musical chemistry lure all 20 people present at 100Copies into the small room. We twitch and clap, pump fists and elbows to the “sikk sikk” of the cymbal sample and the wiry melody of oriental synth sounds that oscillate manically from Chipsy’s keys. Also in the room are Alaa Fifty, KNKA, and a couple of producers and engineers from the pirate-radio-station-turned-label Rinse FM from London, who are here as part of a collaboration named Cairo Calling organized by the British Council.

The project started in January, when several musicians including Sadat, Fifty, Diesel, KNKA and Figo went to London to do studio sessions with their UK counterparts including grime and dubstep producers Faze Miyake, Kode 9, Pinch, Mumdance and Artwork. Now they’re back together to concoct more cross-genre pollinations, mixing elements of UK electronic music with Egyptian sounds and the amorphous structures of mahraganat. The results are extremely fresh.

But today Islam Chipsy is the star. If you’ve ever seen him in action, it’s not hard to understand why. Twenty-eight years old, Islam Chipsy is an avant-garde keyboard virtuouso from Imbaba, Cairo. He just released his first international vinyl with the Egyptian record label Nashazphone, titled “Islam Chipsy: Live at the Cairo High Cinema Institute.” He’s currently working on his first studio album.

Although his keyboard is preset to familiar oriental scales, timbres and notes, Islam Chipsy entirely deconstructs the typical shaabi sonic sphere, morphing it into something that is both familiar and outer worldly. His music is heavily percussive and rhythm-based, yet he has redefined the possibilities of the holy trinity of dance music: synthesizer, drums and bass.

Speaking to the bright-eyed musician on the 100Copies balcony, I find that he has a stellar sense of humor, good comic timing, and is inspired by an Egyptian keyboardist named Magdy al-Husseiny. 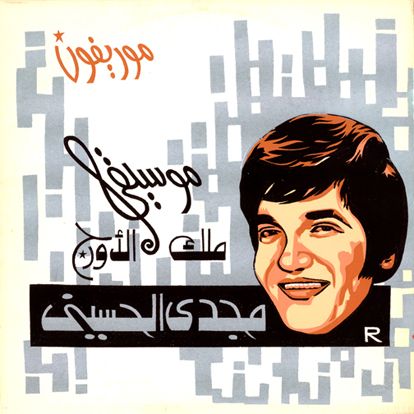 Islam Chipsy is known for his ever-changing style. In one performance he can be found sporting a suit and tie and a Beatles-like get up, the next he’s rocking a Sonic Youth shirt and a dyed-blonde stripe that cuts through his otherwise black hair. He’s been making music for about 15 years and has a tight schedule of performances at Cairo cabarets, in addition to composing tracks for wedding singers and entertainers.

I ask why his performance name is Islam Chipsy. He laughs.

“When I moved to Imbaba some years ago there was another guy who already lived on my street with the same name as me, Islam Saeed,” he explains, leaning forward on the edge of his chair. “Thing is, although many people in Egypt have the same name, the problem is that this guy also played the org [keyboard]. After a while he kept taking credit for all of my music — songs that would come out, or gigs. It couldn’t continue that way…”

“Meanwhile, I was trying to quit smoking cigarettes,” he says. “So I always had a bag of chipsy with me [chili and lemon flavor]. Even at the gigs I’d play and instead of smoking, I’d be munching chipsy. So naturally, I became known as ‘Islam with Chipsy’ — and then Islam Chipsy.” 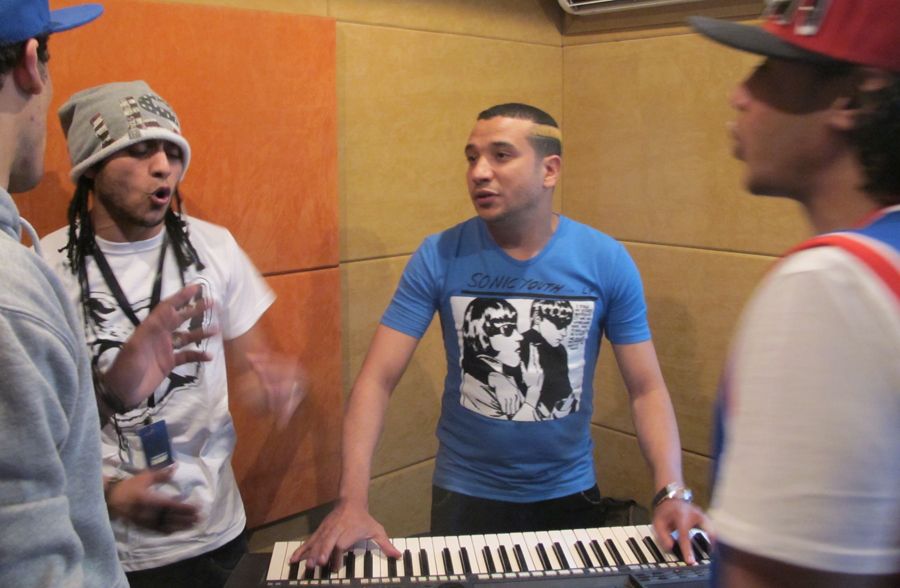 Islam has been producing his special musical breed, what he calls technic-music, for about 10 years now. He got his break at a wedding eight years ago, when asked by a friend to accompany him on the keyboard. He was immediately noticed for his special style of playing — the way he “dances on the keys,” as his peers describe it. He differentiates his “techno-shaabi” from the mahraganat music of Figo, Sadat, Alaa Fifty, Diesel et al. He explains that his music doesn’t cross over much into mahraganat because a large portion of it is created for a different purpose — he composes songs for Mahmoud El Leithy and other stars who are completely separate from the mahraganat genre.

At his recent live show at the opening of D-CAF, he literally shook the weathered walls of Shaharazade with his performance project EEK alongside his two drummers Eslam and Khaled. He had people bouncing off the walls, twirling, head banging, sweating, fist pumping, waist-whirling and raging through his hour-long set.

There are moments in his live sets when his unabashed repetitiveness becomes disorienting. Having observed him in the studio for a couple days, I don’t think Chipsy’s suffering from a lack material: repetition seems to be a part of his act. Throughout the set a few melodies come in and out, looping around over and again — just as one finishes, he breaks into another then another in a cyclical fashion, and all the time his bending pitches have you feeling as though you’re stuck in a Super Mario level you can’t figure out how to beat. Polyrhythmic drums kick forward, speeding up and slowing down as the set glides across b.p.ms ranging from 110 to 150.

Melodies revolve around and around until you no longer remember where you are, how you got there, or what time it is. But throughout all of this, what’s most impressive is that Islam Chipsy is creating his set live on stage — sure there’s the programmed synth samples and percussion loops, but for the most part he’s creating layer after layer of oriental synth sounds that squeal rapid-fire notes, pulled and stretched in all directions through his signature pitch-bending technique. As the set progresses, Chipsy and his drummers almost eradicate the lines between melody, rhythm and timbre to create an amorphous sonic structure and a happily manic dance frenzy. His rhythms burst with a sense of resistance, creating a sort of militant yet playful soundscape that reminds me of something John Cage said in 1939: “percussion music is a revolution.” If that’s the case, than Islam Chipsy’s percussive sonic boom is an agency of revolt.

Listening to Chipsy online won’t do him justice. He’s a live show kind of guy. But I suspect that his recording work with Mahmoud Refat at 100Copies and the Rinse FM producers will treat us to some remarkable Chipsy tracks in the coming year.

AD
You Might Have Missed
Carbon Colonies & A Green New Deal
What we talk about when we talk about trees
Mugamma revisited: Reimagining the building and the square
Where do old lesbians go to die?
AD
Maha ElNabawi
89 articles on Mada

Topics
Related
8%
Assessing two films on mahragan music
Maha ElNabawi | In my experience, good music documentaries are structured around a question or quest. In “Searching
8%
From tok toks to TV: New film gets to the heart of mahraganat
Maha ElNabawi | “We have four social segments in Egypt: the poorer than poor, the poor, the middle class and the upper
Abdel Halim Hafez
Band of the week: Hello Pyschaleppo
Maha ElNabawi | The down-tempo, moody mash-ups and densely layered material of Hello Psychaleppo are somehow
Amr 7a7a
You just got mahraganed
Andeel | It’s going to be difficult for you to like mahraganat if you’re the kind of person who asks the waiter