A preliminary plan from the early stages of the renovation. - Courtesy: CLUSTER
By
Jenifer Evans

A solo show by Hassan Khan opens Sunday as the sole visual arts component of the Downtown Contemporary Arts Festival (D-CAF) this year. The exhibition takes up four ground-floor spaces, owned by real-estate firm Ismaelia, in the Kodak passage that joins Adly Street and Abdel Khalek Sarwat. The spaces have been renovated and designed by CLUSTER specifically for this show, curated by CLUSTER’s Beth Stryker and produced by D-CAF and Orient Productions.

The artworks span Khan’s career so far and were partly selected because they have not been shown in Egypt before, apart from the 1997 video “Do You Want to Fight?” Also included are what is probably Khan’s best-liked work, “Jewel” (2010), and the light and sound installation “Dom Tak Tak Dom Tak” (2005), as well as various object, text and photography-based works.

“I hope that the works that people latch onto shed light on the ones that are more elusive, and that the elusive ones make those they recognize slightly less easy decoded,” Khan says.

Artists Hady Aboukamar, Taha Belal and Jenifer Evans (who is also culture editor at Mada Masr) helped install the exhibition alongside D-CAF staff, a technician sent by Khan’s Paris gallery Galerie Chantel Crousel, and one from the German company Eidotech. They talk to Khan about what it means for him to be having a solo show in Egypt now after having had many major shows abroad over the last decade, while living and working in Cairo.

Taha Belal: How long has it been since you’ve shown here?

TB: But you’ve shown pieces in group shows, and done lots of concerts.

TB: And certainly not at this scale.

HK: Not at this scale.

TB: I feel like this is the biggest solo exhibition I’ve ever seen in Egypt. There was Huda Lutfi’s Townhouse show in the Factory space [2013], but I think the Factory space is different. This is four different halls. The [Ministry of Culture’s] Culture Palace is huge though.

TB: But definitely it’s the first solo contemporary art show on this scale.

HK: Wael Shawky had some big shows a while ago. But not different works — one work, Wael-style, you know. “The Green Land Circus” [2005], I don’t know if you saw that? With mud constructions and projections. It was in the Factory space. Shady El Noshokaty also had a really good large scale show at Darb a few years ago.

Hady Aboukamar: Have we worked on anything this big? No. “The Magic of the State” [at Beirut, 2012] wasn’t this big.

Jenifer Evans: A lot of the works deal with Cairo, or were made in Cairo, or are set in Cairo, so I feel like showing them here they’re going to be received quite differently from elsewhere. Not just because of your reputation and the fact that people already have ideas about your work, but because people are going to recognize things in the work that people outside might not see. So it feels like the right thing to do. When you’re making work about Egypt and mainly showing it abroad, people might feel like you’re being an exporter or ambassador.

HK: I wanted that consciously. I wanted it to be a show that was also presented in a different way. That was important. Also in relation to the scene here.

TB: I think that’s going to be immediately clear. Even just from the floors being poured cement, you simply don’t see spaces like that here. 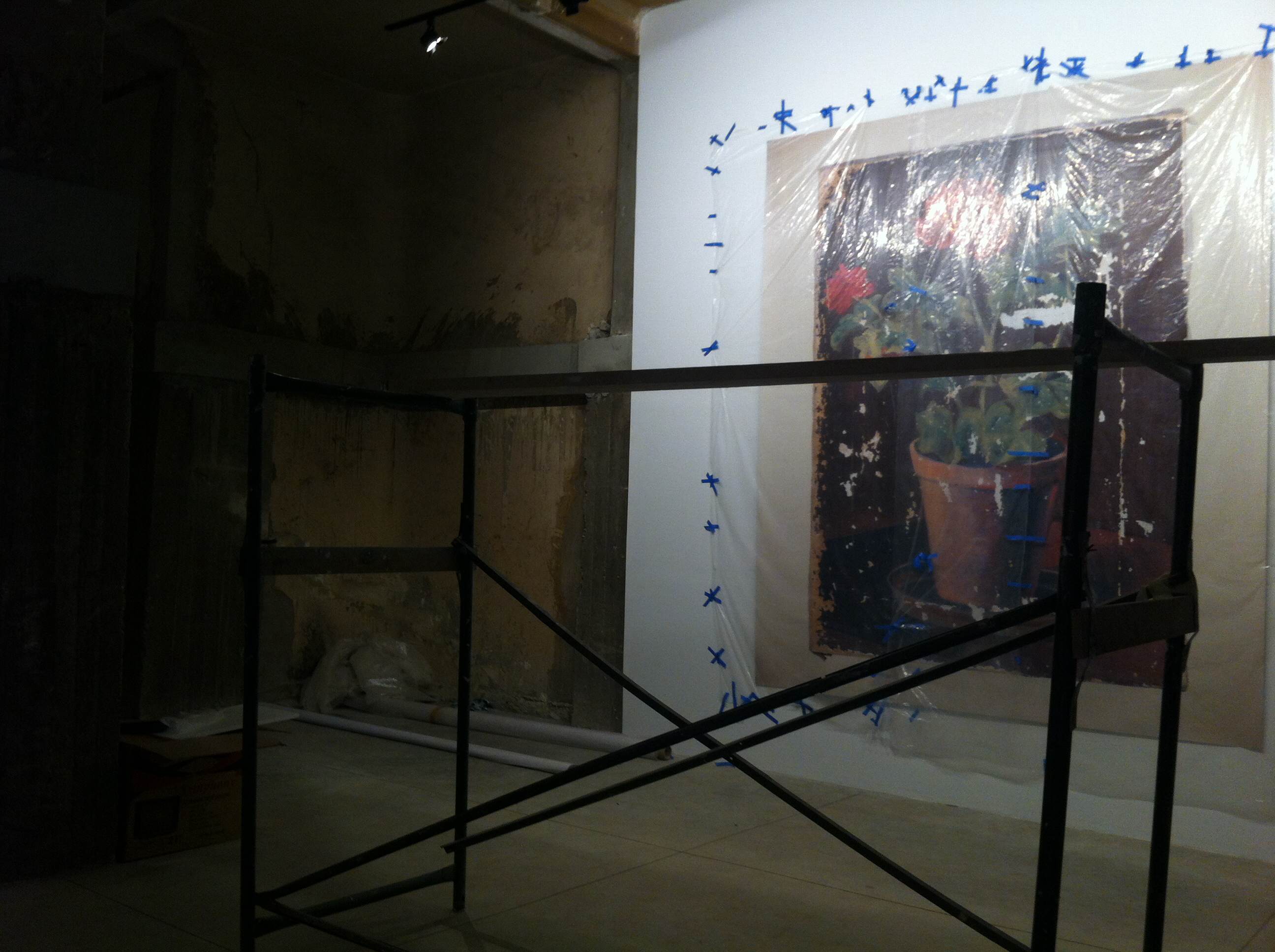 HA: Was it Beth [Stryker] that approached you about it or did you approach her? Was the space scouted?

TB: It’s been in the planning for a while, right?

HK: The intention has been there forever. But there was never a convincing context. At one point, a few years ago, Wael and I were discussing doing a joint exhibition together, obviously it would have been something else, but to do it with this logic, also. But we didn’t manage to negotiate the situation.

TB: With the logic of super high-end production?

HK: With the logic that it fits the work, whatever the work needs it fits the work perfectly. If it needs super high-end production it’s that, if it needs to be rough it’s rough, whatever. That both the work and the way it’s exhibited make sense in relation to each other.

HA: So how does this particular space make sense? It’s very clean but it’s rough around the edges.

HK: I think they’re like different shows in a way. So in Hall A I think it makes sense as a pristine gallery type space, where you can look at works that have some delicacy or are a bit intimate, or need this kind of reading. And the fact that it’s rough around the edges doesn’t bother me so much because what is not rough is functional, so whatever exists outside the functional area is ok, it doesn’t disturb me personally.

To go back to the first question, I wanted to do a show. Beth approached me with the idea of doing a show with the American University in Cairo because they had approached her to do something and she wanted to do something with me. D-CAF, since the screening of “Blind Ambition” [2012] last year, had suggested what about next year we do just an exhibition with you, on that scale. So I then put Beth and D-CAF together. It made sense to pool resources.

These specific spaces, Beth had an idea that she wanted them and D-CAF were anyway connected with Ismaelia. It was actually a coincidence that both of them had access to these spaces and were interested in them.

For me the fact that it’s a store-front was not a total priority, but I think it adds to it and I’m happy with that. 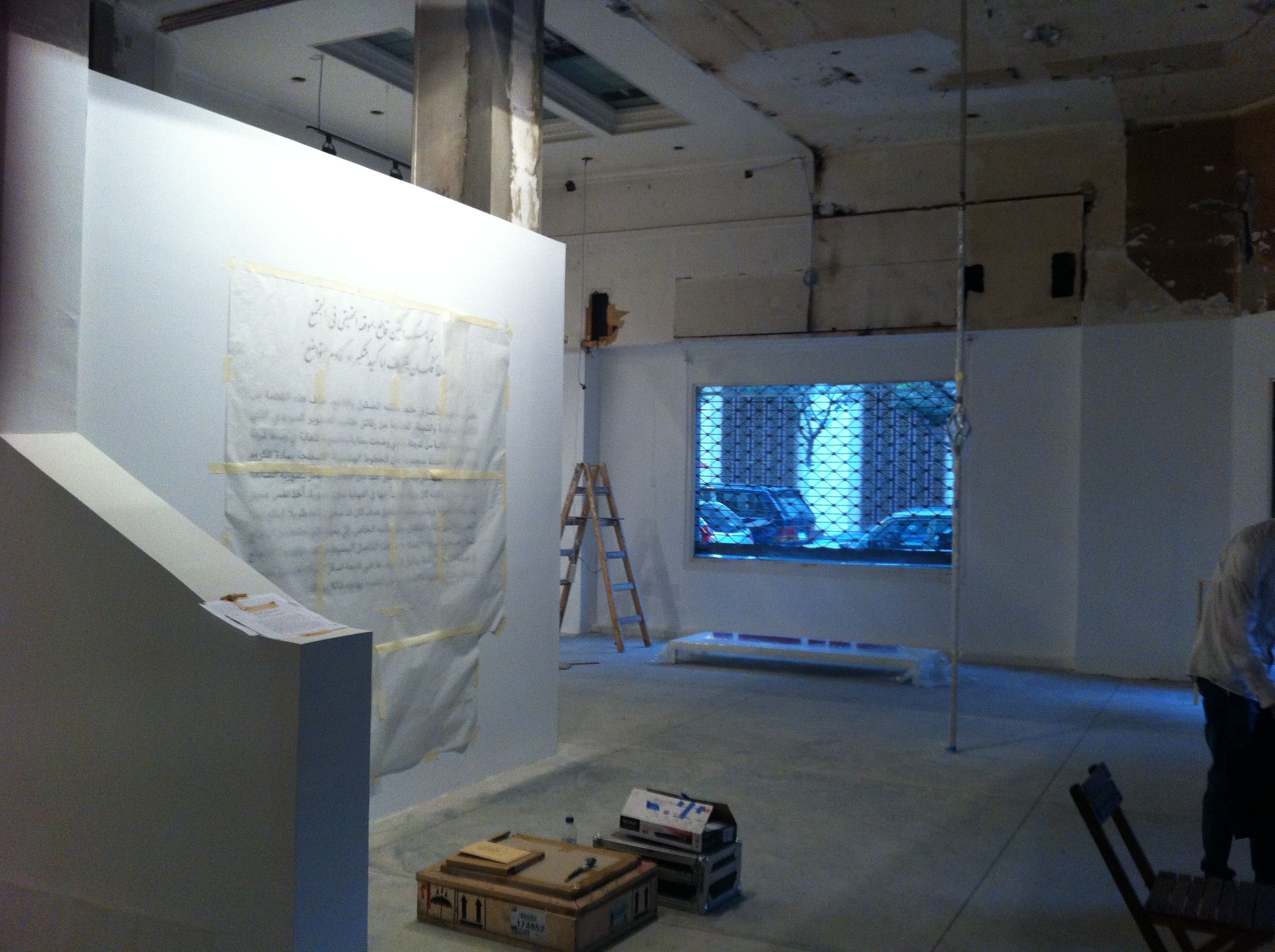 TB: I remember hearing that Hassan Khan doesn’t show in Egypt because the works are not shown properly, or there’s no capacity to show them.

HK: That’s half the story. The other half is that no institutions approached me seriously, with real commitment.

TB: This was kind of the perfect scenario because the space was not finished. There was this renovation process and you were part of that, so walls were made specifically for certain pieces.

HK: The other side was content. It’s maybe not the show that people expect me to do, here. At least a segment of the audience. There was this perception here that I do video, for years at least — I guess it’s less now. Because my very early works were video and were shown in Cairo at the beginning quite a lot. In Nitaq in 2001, I did a video installation called “Reading the Surface: 100 Portraits, 6 Locations and 25 Questions.” And that I think at the time — it was also rough, I didn’t have much experience then — was the biggest video show that had ever been done in Cairo, and it had some kind of impact for its content but also its ambition and scale. It was many rooms and it was something that at the time wasn’t very common. And I think these were the last things that people really saw. Maybe I’m wrong, but I imagine there’s a segment that imagines this and then they will come and see text works, and objects, and different things.

JE: You’ve been involved in the other two D-CAFs, right?

HK: Yeah. And I’m not going to be involved in the next one for sure. I feel a bit embarrassed about it.

JE: But you have a relationship with Ahmed El Attar, right, and Mahmoud Refat? You’ve worked with them in other capacities?

HK: Yes, I’ve known Ahmed for over 20 years, and I’ve made the music and video for all his theater productions. I’ve worked with him very closely on his work for many years and we’re friends. So there is nepotism and personal connections, but meritocratic nepotism, something like that…

Something that’s making me feel excited is — I don’t think the works are about Cairo actually, but some of them come from this context. But for example “Mahmoud El Ansari” [2010], this piece, several people — curious passersby, members of the installation team, random people who happened to catch it by almost by mistake — commented to me about it. They’re like, “Yeah.” Especially the title. They’re like, “This is someone I know.” There was a certain reaction that was personal and had nothing to do with art. It’s just like this thing suddenly makes sense —

TB: They could relate —

HK: They could relate to something. And that’s interesting. I also still get these reactions to some other works when they are shown anywhere — where the reaction is not based upon recognizing a local context. For example like “Insecure” [2002], the reaction for many people is not one in which they’re looking at an artwork. They have a real disturbance sometimes — it feels like it’s not about “this is an artwork,” it’s about something else that’s happening. I think in some works the fact that it’s here emphasizes that side.

HK: Ah, Rex. If there’s anyone over 30, they’re going to recognize Rex straightaway.

AD
You Might Have Missed
Carbon Colonies & A Green New Deal
Mugamma revisited: Reimagining the building and the square
What we talk about when we talk about trees
Where do old lesbians go to die?
AD
Jenifer Evans  @jniferrl
40 articles on Mada

Topics
Related
Aida El Kashef
From Mahfouz to Mohamed Khan: On two of CLUSTER’s downtown tours
Rowan El Shimi | As part of its Creative Cities conference hosted by the American University in Cairo, CLUSTER organized
Ahmed Badry
Doing nothing
Sarah Rifky | #WAYDO marks an interesting moment of collaboration between two types of institution and it stages a
100Copies
Controversial tunes: D-CAF’s music, 100Copies and mahraganat
Maha ElNabawi | This year’s edition left both audiences and artists frustrated over the curation and management of