For two unusual afternoons last week, downtown Cairo dwellers were surprised by a series of street performances, part of the much-anticipated third edition of the Downtown Contemporary Arts Festival (D-CAF), which started on March 20.

The Borsa and Alfy Bey pedestrian streets were temporarily turned into a stage to host two groups of dancers, protagonists of this year’s Urban Visions program. Performing arts are a key element of the festival, taking up a large portion of the overall schedule, and the Urban Visions section most intuitively embodies D-CAF’s stated mission; that is, bringing different manifestations of contemporary arts to the heart of Cairo by allowing ordinary citizens to encounter a free performance in an unusual context.

If one of the program’s intentions was to make contemporary art and dance more appealing for the masses, the first group’s performance, entitled “Invisible Boundaries” and choreographed by Ezzat Ismail, fails to meet the challenge it proposes for itself. The 30-minute piece has little to do with innovation or creative use of site specificity, let alone visible or invisible boundaries.

Three male performers (Hossam Abd al-Hameed, Hazem Header and Mohamed Anwar) stand in the middle of a circle formed by the audience and crew, wearing minimal dark brown costumes reminiscent of medieval-style fantasy TV shows. Recorded music starts with a grave, continuous chord, and as the vocals strike up, the trio begin swinging almost imperceptibly from left to right, widening this movement further and further as the music grows more intense.

A tribal drum line kicks in and they quite predictably leave their original positions and turn around themselves, following the path of an imaginary circle and repeating the same steps over and over, using familiar, outmoded codes from the modern and western jazz dance repertoire. The pace increases. The suspense and gravity of the score transpires in the performers’ faces, yet at times they look confused, tired and unconvinced, as if preoccupied with getting it over with instead of dancing with abandon and a solid theatrical presence.

Built around a steady crescendo of music and choreography, the piece focuses attention on the physical effort that builds up until eventual exhaustion (both metaphoric and actual). Such a linear narrative — the epic music literally guiding the choreography step by step, with a quiet, meditative beginning and an explosive finale — doesn’t allow for hesitant expressions or hinted gestures. The movements that are there appear too raw: both slow gradual passages and sudden turns and shifts are performed in a hasty, badly synchronized way, slightly ahead of time. 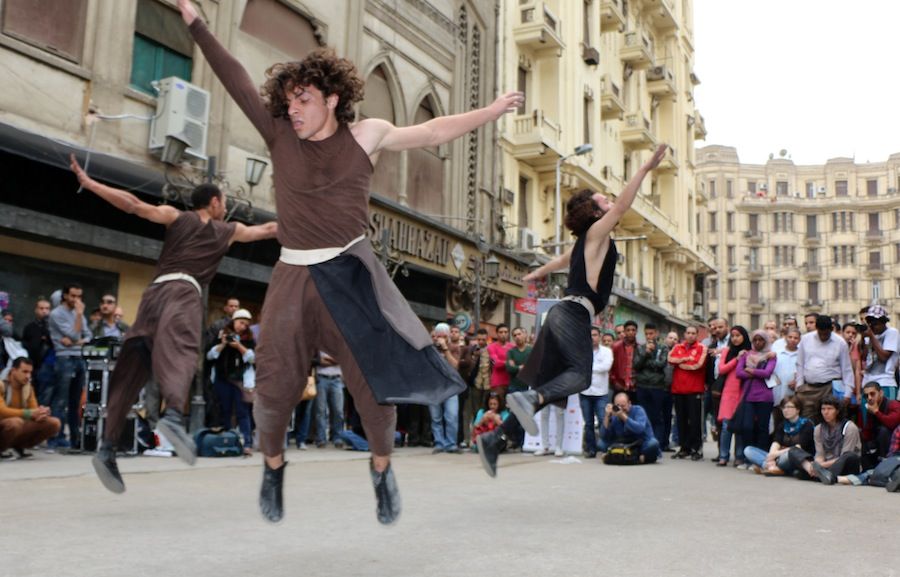 In the second part, two performers suddenly approach and clash with the third, hitting each other violently. Each dancer in turn attempts to break an imaginary obstacle as the others push him back abruptly. They play with the weight of their bodies, struggle, use each other as supports for acrobatic flips, working with rather old and worn theatrical representations of boundaries. The final part resembles a tribal ritual or Sufi dance, popular in Egypt and part of the moulid tradition, where devotees move their heads and upper bodies rhythmically, bouncing and rotating from side to side in a crescendo that follows the music until they reach an altered state of consciousness.

The only attempt at engaging with the audience is a sequence in which the dancers walk rapidly in straight lines, suddenly changing trajectory and staring intensely at people in the audience. They may as well be performing on a stage.

An anachronistic, alien aesthetic permeates the whole piece. It’s not clear if the choreographer’s aim was to choose a performance completely disconnected from the local, contemporary social and artistic context.

Nevertheless, audience members seemed to appreciate the unexpected interruption of the daily flow of activities in downtown Cairo. Many were foreigners, tourists and the festival organizers, but the curiosity around the dancers grew quickly and local workers stopped to watch, take pictures and videos, comment and enjoy the show.

Dance and theater can be more directly engaging than other visual arts for people of diverse ages and backgrounds because of the accessibility and universality of body language and its strong, naturally entertaining connection with sound and voice, but the success of the Urban Visions program lies mainly in the sheer presence of contemporary dance in public space more than in the content and concept of the performance, which in this case seems parachuted in, imposed from outside through the clichéd strategy of surprising a clueless audience, rather than a site-specific work. For those not inclined to enjoy contemporary dance and take it seriously, it will not challenge prejudices — indeed it confirms remarks typically made by those who see contemporary dance as pointless and hard to distinguish from the random improvisation of someone who wants to mock it for fun, trying to interpret an undefined “inner struggle.”

The four performers work with “visible,” material and therefore malleable boundaries. The irregular circle of bystanders that takes shape as the music starts is broken as the dancers advance steadily toward and cross it, forcing the audience to move around them, follow them, disassemble the circle. White ropes delineate spaces around which the dancers walk and run, following the path drawn by them. They arrange the ropes in different shapes, then use them as an interactive tool, wrapping themselves around one, or tying one to the bodies of the other performers.

The dancers make a more interesting use of the space by using ropes and walking trajectories to play with abstract forms, interact with the audience and shift their point of view, diverting attention from center to periphery and involving people in their game of changing positions, yet without invading their personal space or forcing them awkwardly onto a desired path.

But if D-CAF was “designed to revitalize the center of the capital city through preserving the architectural grandeur of downtown while celebrating Cairo’s dynamic urban fabric,” bringing “high quality, innovative works that will challenge and broaden people’s ideas about contemporary art, performance spaces and community engagement,” this part of the program so far seems like a missed chance to creatively exploit the rich potential of the urban fabric.

In the ambitious words of D-CAF director Ahmed El Attar in a recent CairoScene interview, such an initiative is immediately capable of “breaking the class gap,” but the fact that the mainstream Egyptian public is not familiar with the dominant Western tradition of contemporary dance developed in the past century does not mean that creative, original approaches cannot be elaborated that are capable of taking the local dimension into account.

Now more than ever, it is very important that public manifestations of art happen — not only in the brief span of a festival — as restrictions to movement and free expression increase and the mere presence of bodies in public space is constantly threatened. It could actually change the attitude of the general public if they could see higher quality performances (like others scheduled in D-CAF’s past and present programs), ones that actually push boundaries, visible or invisible, of the infinite possibilities of dance and the beauty of moving bodies.

The two dances will also be performed on Saturday March 29 at 4 pm, at the Statue of Ismail overlooking the Roman Theater in Alexandria, and on Friday April 4 at 2 pm in front of the Egyptian Stock Exchange (Borsa).

Topics
Related
art in public space
Whose urban vision? A ranty diary of a D-CAF program
Mia Jankowicz | Street harassment is not a theme but should be taken on as a structural condition, as unavoidable to
clowning
Sadness and kitsch in a play about making ends meet
Naira Antoun | Eight actors sit on chairs facing one another, four along each wall. It’s difficult to see how they
Cairo Contemporary Dance School (CCDC)
Contemporary Dance Center up in the air
Mai Elwakil | The Cairo Contemporary Dance Center, the first professional training program of its kind in Egypt, opened