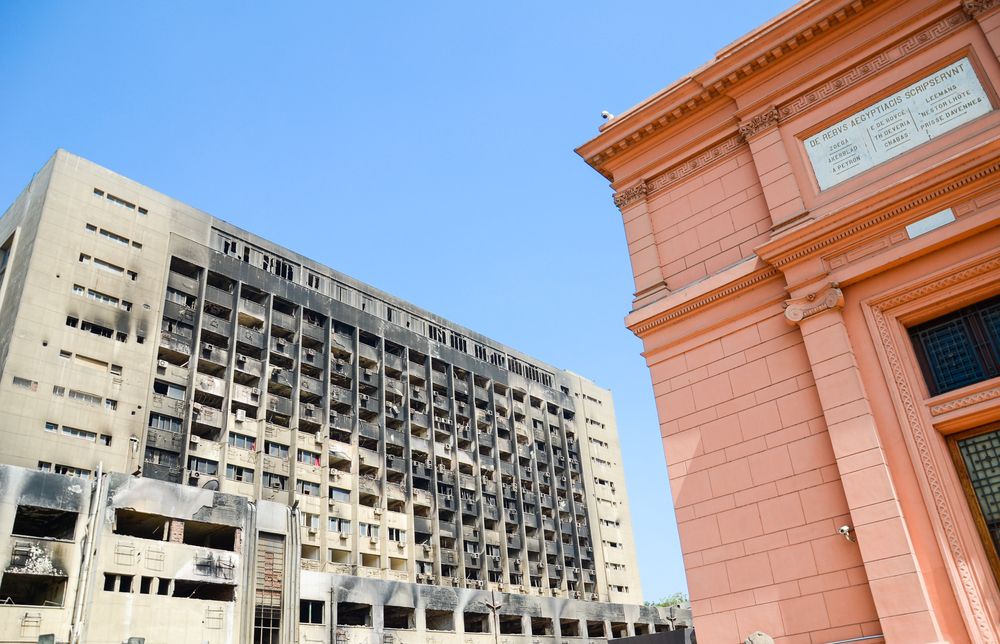 The Cabinet has issued a decision to tear down the former headquarters of the disbanded National Democratic Party, and reclaim the property as part of the Egyptian Museum’s perimeter and garden, a statement on the Cabinet’s Facebook page said.

The headquarters of the former ruling party was set ablaze on January 28, 2011, after which it was stormed and looted.

The Cabinet’s latest move comes as part of the state’s efforts to maintain Egypt’s archeological heritage, according to the statement, as well as an enactment of Article 49 of the Constitution which obliges the state to protect and preserve antiquities and their areas, and to restore and maintain them.

“This is considered a historic decision given this piece of land’s significant financial value,” the statement read.

Earlier this year, Antiquities Minister Mohamed Ibrahim asked the government to annex the NDP’s former headquarters to the Egyptian Museum.

The minister claimed the land originally belonged to the museum and that it was unjustly seized in 1954 for the sake of building headquarters for the NDP.

The plan is to use the land within the framework of the museum’s renovation, which includes installing a new visitors’ gate, an ancient nursery and an exhibition documenting the 2011 uprising, the minister said at the time.

Topics
Related
budget
Weekly spotlight on state culture: The Culture Ministry speaks up
Mai Elwakil | Supporting local creative production and public access to the arts is a difficult task, Culture Minister
Cairo bombings
The past and future of the bomb-damaged manuscript museum
Elena Chardakliyska | Early on January 24, 2014, a bomb exploded in front of the Cairo Security Directorate, just across the
Cairo bombings
No liaison between antiquities and culture ministries to renovate adjacent museums
Minister of Antiquities Mohamed Ibrahim and the chairman of the Egyptian National Archives Abdel Nasser