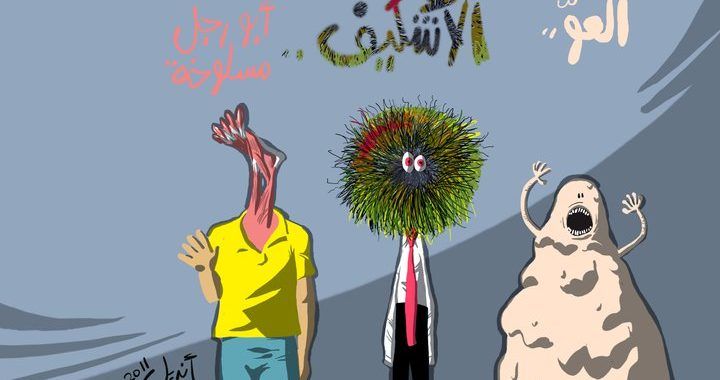 I’m not sure when I first met Andeel. I’m sure that he and I had some sort of conversation after I started at Egypt Independent, where he was cartooning, in 2012. But there were so many people coming through the office — not including the random group of seemingly always different men smoking cigarettes in the lobby — that it was hard to keep track. 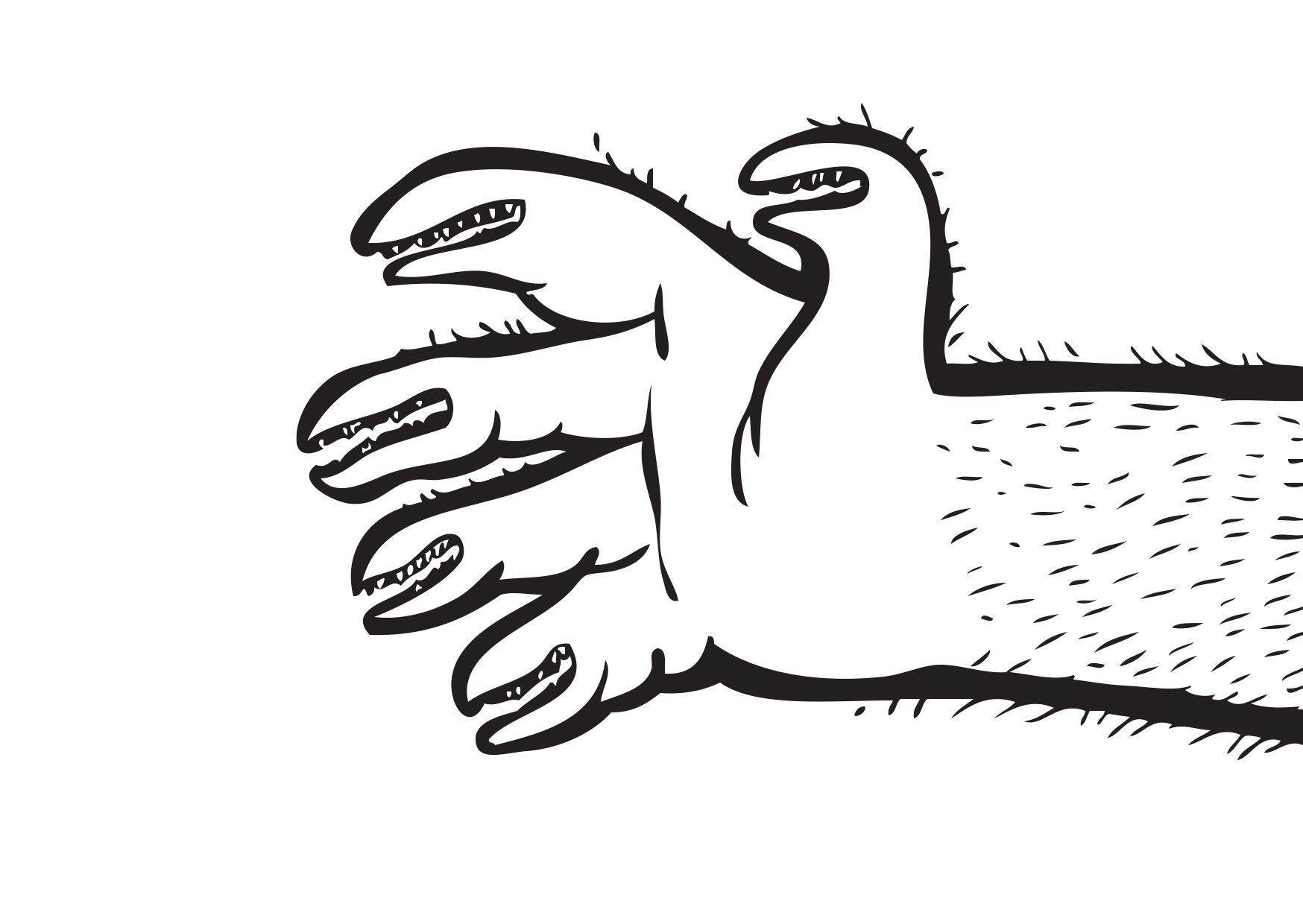 Andeel, now 27, has been making cartoons professionally for almost 10 years. He started off working for the privately owned Al-Dostour newspaper in its graphic heyday under veteran cartoonist Amr Selim. Then he worked for several years at another privately owned paper, Al-Masry Al-Youm, and co-founded the quarterly comics magazine Tok-Tok. 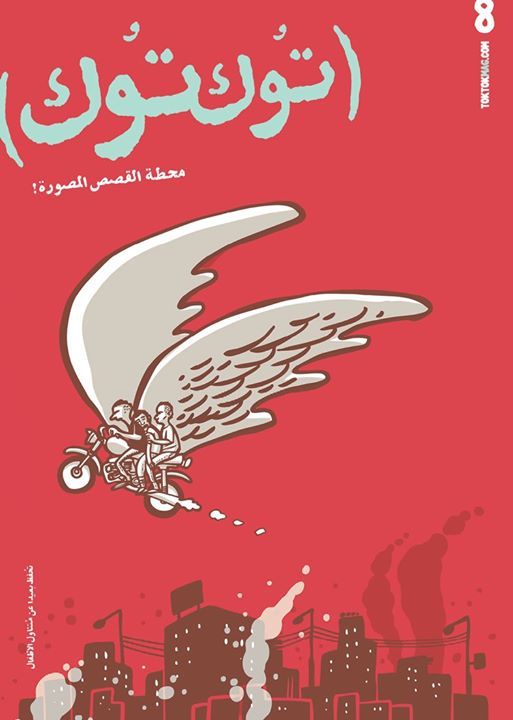 I didn’t really know much of that until recently, and his style and influences have only slowly come to my attention. Most of my early memories of him though were in a depressing, florescent-lit, smoke-filled back room of Egypt Independent, Al-Masry Al-Youm’s sister paper, drawing on his Wacom tablet. He was the designer and I was the production manager for the weekly print edition. This week’s Medrar TV video, embedded here, involves Andeel talking to artist Hany Rashed and playing football, but it also includes shots of him at his computer drawing, presumably on the same thing. Because of Andeel, “Wacom” in my head is pronounced with a heavy, stylized Arabic accent. In English, Andeel has one of these unique accents that Egyptian autodidacts have carved out for themselves along their individual journeys toward fluency. His has a touch of Bristol tempered by purposefully overly-Arabized foreign words like “Wacom.”

Watching him use the Wacom is mesmerizing. Tuesday after Tuesday and typically never before 1 am, Andeel would put a cover on the weekly print edition. There was usually a long conversation between him and the design. There are moments in deep discussions when you pause and ask your conversation partner how you got to a certain subject. We usually felt the same with our covers, so much so that we once tried (and failed) to record the process in the hopes of figuring out how we got to a certain unexpected end result. 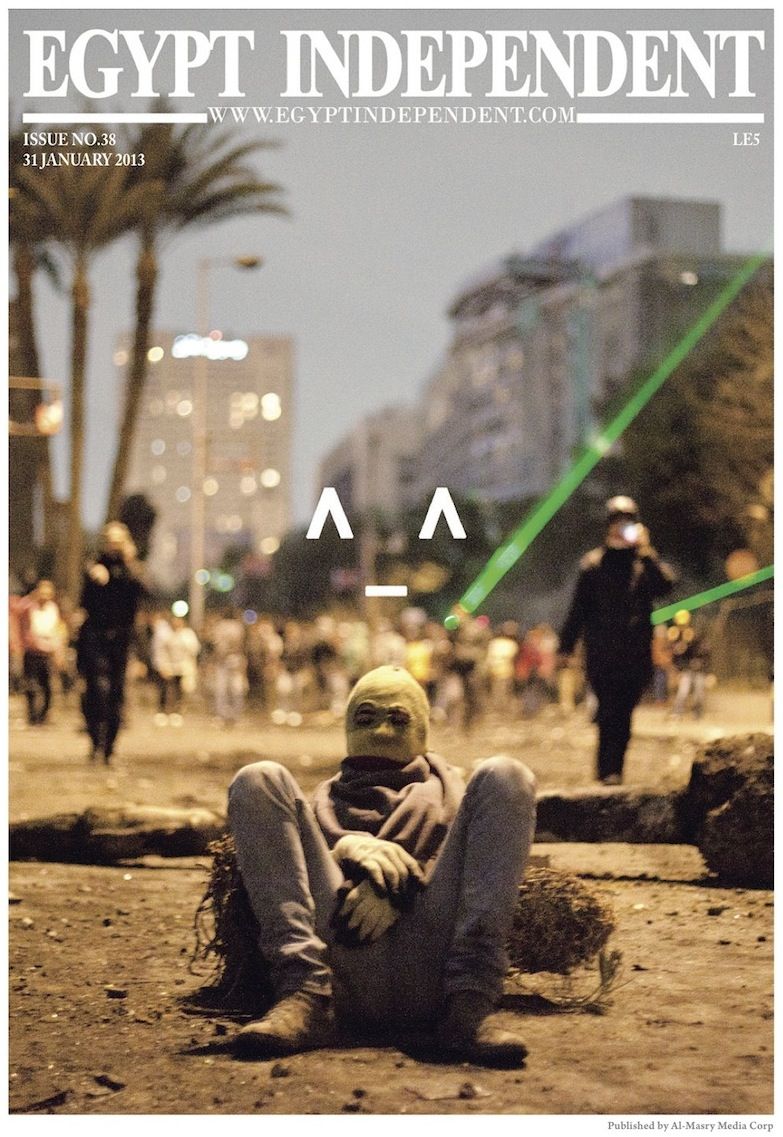 Andeel has been drawing for a long time, so his style was “mature” when I met him: it has always been the same to me. Recently though I actually thought about how it had evolved and what makes him an important cartoonist. Last week we went to visit his mother, and after making a delicious dinner of fish she pulled out a stack of his old cartoons. Inside were a few drawings by Amr Selim, too. I think I’d actually call some of Andeel’s early works drawings rather than cartoons. They looked more realistic, and were signed “Qandeel,” sometimes “Mohamed Qandeel,” his given name. 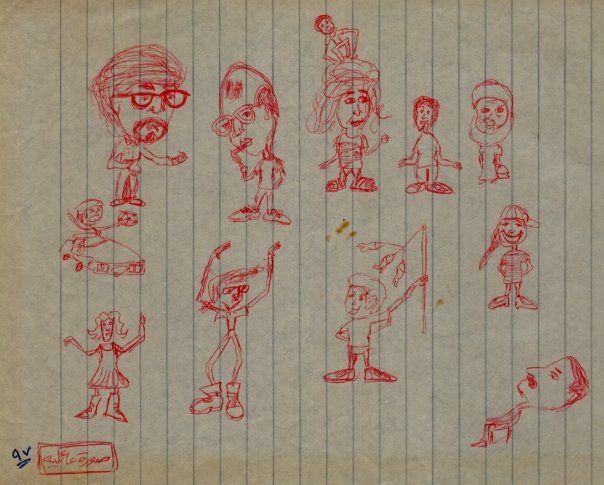 Many people are named Mohamed in Egypt. I wish my telephone would ignore it when I search or scroll. Andeel took that one step further, shedding not just the Mohamed but also the silent Qaf at the beginning of his last name. His Facebook page, which has an absurdly large following, reads “Andeel with an Alif.” This page is one of Andeel’s outlets for directly publishing cartoons. It has a double importance: he can push the cartoons his superiors are unwilling to, and he can discuss them in a way that he can’t with people who pick up print editions.

It’s maybe because he’s not called Mohamed anymore that he often addresses me, and other people, as Mohamed. “Enough ya, Mohamed,” he says. “What’s the point, ya Mohamed?” Others might get upset being called something other than their name, but I’ve been conditioned to it between growing up in the American Midwest, poor transliteration, and a horrible Arabic accident. And at the end of the day, calling me Mohamed is just a mediocre joke. 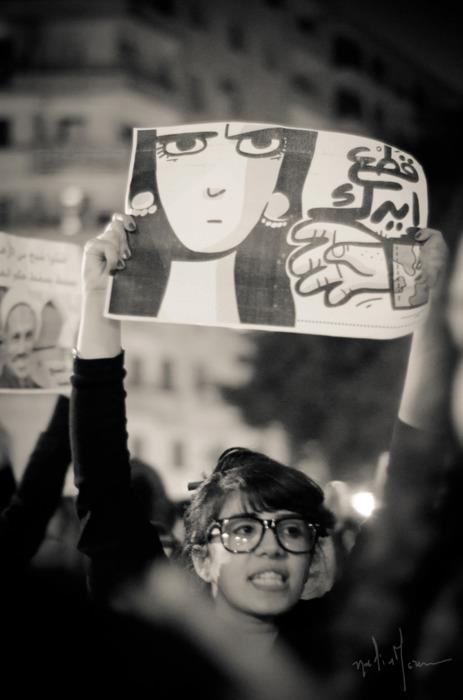 Andeel’s other jokes tend to be funnier. A friend once told me that laughter is a very basic expression of understanding. This makes sense to me. With my poor Arabic, I often laugh after understanding the literal meaning of the punchline, not necessarily the joke itself. This may be why I’ve found Bassem Youssef funnier since Andeel started working at satirical TV show Al-Bernamag. His mannerisms and take on things seem to have trickled into the host’s routine. This includes a bit of countryside Egypt. Andeel also runs an intermittent podcast called “Radio Kafr al-Sheikh al Habeeba,” which takes a subversively humorous look at life and politics in Egypt, from the perspective of that governorate. There’s something to be said for that in a country where so many culture and media sensibilities are shaped by the capital.

If I thought Andeel’s Facebook page, with as many followers as people in the small city of Kearney, Nebraska, had an absurd following, now his jokes and take on Egypt and life are making their way to the same amount of people that live in Canada. This is a question of platform, and scale. Certain cartoons contain content that Bassem Youssef could never get away with. But on Al-Bernameg, although he can’t push the envelope as much, he can do so for more people. 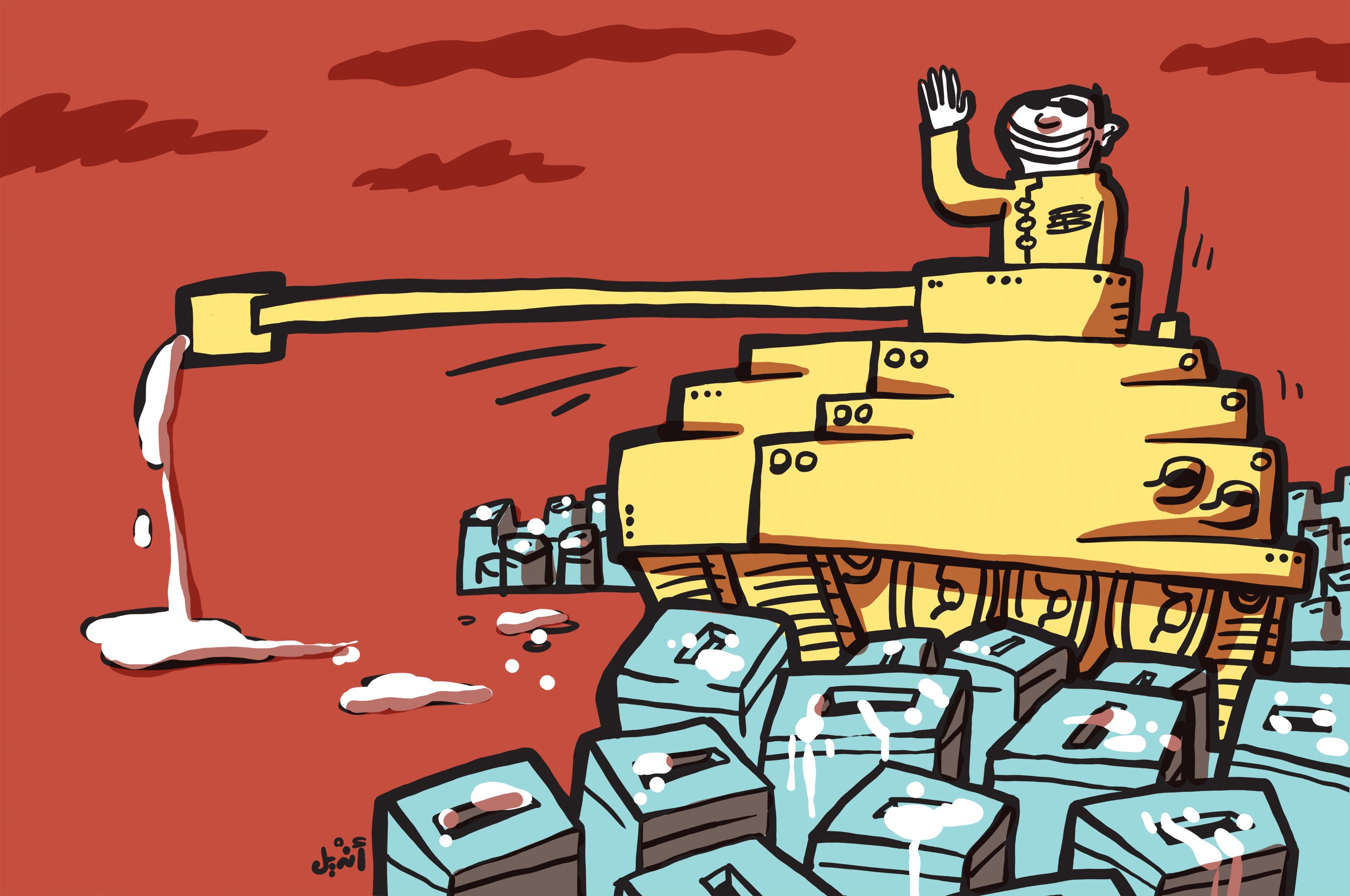 He has a sort of subtle celebrity, which you would never know if you took someone completely ignorant of Egyptian satire and dropped them into one of the coffeehouses where he often hangs out. He and a group of other talented cartoonists have selected these coffeehouses based off simple criteria. Good coffeehouses have good service, good lemonade and good apple shisha, because nobody that matters smokes other flavors.

At one particular coffeehouse there was a long conversation about the silly names of towns in the governorate of Kafr al-Sheikh, where Andeel was named Mohamed Qandeel. Later that conversation moved onto the means by which microbus drivers stay awake as they race between the small towns to make sure they take as much cash home as possible. I don’t remember how we first got on that topic.

Andeel is also a designer, writer and cartoonist for Mada Masr.

AD
You Might Have Missed
Carbon Colonies & A Green New Deal
Mugamma revisited: Reimagining the building and the square
What we talk about when we talk about trees
Where do old lesbians go to die?
AD
Jahd Khalil
22 articles on Mada

Topics
Related
Atef al-Tayeb
Egypt’s cinematic gems: ‘Hot Night’
Andeel | The law is everywhere in this movie, being broken.
Al-Bernameg
Breakfast with Mada: Bassem Youssef on cracking the walls
Sarah Carr | Every Thursday Mada Masr invites someone interesting to the office on the promise of a hearty
activists
Lexicon of a revolution’s insults
Andeel | A dictionary of labels invented after January 25, 2011, compiled by Andeel.