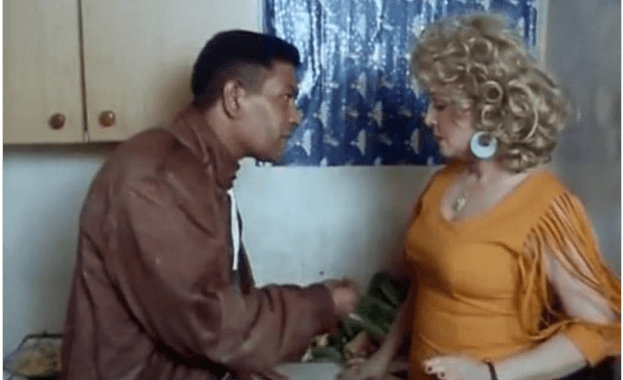 Atef al-Tayeb’s  Laila Sakhina (Hot Night, 1995) is a movie about a cab and its driver. It’s very similar to his Sawwaq al-Autobees (Bus Driver, 1982), and both drivers are played by Nour al-Sherif.

Between the two films is a long journey of filmmaking, and a long search for what ethical choices mean in a country sinking rapidly into a sea of corruption and injustice. This search is best discussed in a piece by Wael Hamdy, published in Al-Tahrir newspaper in 2010, on the slow evolution of the ethical choices examined between Tayeb’s first and last movies.

Like most of Tayeb’s films, Hot Night starts with a main character on the brink of a massive money-related failure. Sayed, a struggling widowed taxi driver, is on a hunt for LE200, the cost of an operation his mother-in-law needs. Silently and patiently he goes on carving his way through hard-gained piasters wrestled from the pockets of passengers on New Year’s Eve.

Parallel to this is the story of Horeya, played by Lebleba in an astonishingly matter-of-fact follow-up performance to her brilliant turn in Tayeb’s Dud al-Hakuma (Against the Government, 1992). Horeya is returning to a well-paid but hated job for one night only in order to pay a re-housing fee so she won’t get thrown out on the street when her building is demolished.

Their paths intersect at what are for both of them the night’s darkest moments, just before their lives are changed forever. These two fighters, who have drained their lives of everything for others, suddenly find themselves confronted by an immense ethical test in which right is illegal and obeying the law a mistake.

In their reality, Sayed and Horeya are angels of a sort. At the bottom of Cairo’s dirty underbelly they can only struggle against the evil and greed of the night people with their soft claws and stubborn idealistic morals. Tayeb himself, in this movie and in his cinematic career in general, was a bit like these morons. He always threw himself into ventures that were far bigger than his resources, armed only with how much he believed in what he was doing and — like most of his quiet heroes — his silent search for a conscience.

Even though Hot Night is obviously a very low-budget movie, it insists on spending most of its time outside, where shooting conditions are the most difficult and expensive. It also challenges itself with frequent doses of common commercial entertainment: car chases, fist fights, music and dance scenes fill the film. The cab that carries the two heroes keeps on jumping between far-flung neighborhoods of Cairo, because the movie is very strict on shooting where the script says things are happening, which is weirdly very amusing if you’re familiar with the city.

What the movie lacks in money — which shows in its poor technical execution — it makes up for in sincerity and honesty about its subject. This shows in the brilliant acting and smooth script and dialogue, as well as in Tayeb’s subtle but famous semi-documentary style of directing, where all the space is given over to replicating what things are like in reality, both in terms of feelings and images.

Hot Night is completely aware of the political setting in which the lives of its characters are changing. The cash pipes pouring cash into the pockets of big people who end up pouring it onto belly dancers’ bodies intersect with other cash pipes pouring cash into the pockets of people whose job is to send people to other countries to do stuff. At one point, Horeya and Sayed pick up a stranger who flies people to Afghanistan; they can’t understand why someone would want to go there instead of the Gulf. In an earlier, very heavy-on-the-heart scene, the cab is stuck in a road blocked by a mob of bearded men in white galabiyas listening to a sheikh preaching about the necessity of punishing adulterers by sharia law. A slow duff drum beats as the cab crawls steadily between the erect bodies of the Islamists — one of the many stand-out moments of Moody Imam’s exemplary soundtrack.

The law is everywhere in the movie, being broken. People fight, prostitute, steal, deal and traffic, and the police are never there. A policeman only appears when Sayed has an argument with a passenger who broke his promise to pay a specific fare. The law is also very important in the mind of a crazy man who whistles and yells at drivers using their horns near a No Honking sign. Later he is seen in a police station, the house of the law, being dragged and manhandled by bored policemen who look like they wish everybody would just disappear. This law fanatic, who seems to have lost his mind trying to convince people to follow the rules, is another reflection of Tayeb himself. Law and justice were always a nagging cause in Tayeb’s mind; a lot of his films are about justice, either allegorically or more straightforwardly.

At one point Horeya, in a crowded club, jumps into the air to try to regain her stolen money on her own, using her body to crack her way to the banknotes. In slow motion you see herds of drunken customers joining the feasting party. Obviously nobody in the club needs the money, yet their bodies stand between the money and those who really need it. The light dims over them as they carry out their terrible performance.

The movie follows two people on New Year’s Eve, known the world over as a night when you say farewell to a previous life and welcome a new one. But everyone else forgets about the fact that they are neither bidding farewell to nor welcoming anything by getting drunk or stoned or sleeping with prostitutes — our heroes are actually the only two people in the movie whose lives are actually changing, maybe a little bit toward being like those of the people who are the reason for their misery.

Hot Night is an important movie, both for the cinematic value it possesses and for its place in Tayeb’s evolving, careful exploration of the changing face of Egypt. 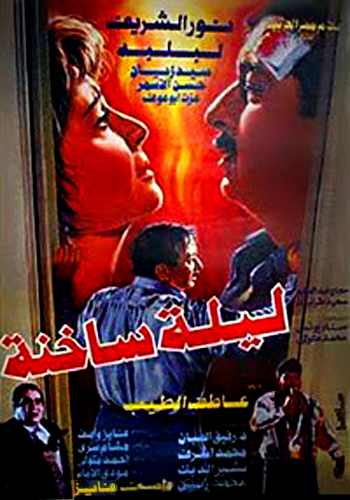 AD
You Might Have Missed
Carbon Colonies & A Green New Deal
Mugamma revisited: Reimagining the building and the square
What we talk about when we talk about trees
Where do old lesbians go to die?
AD
Andeel  @_andeel_
280 articles on Mada