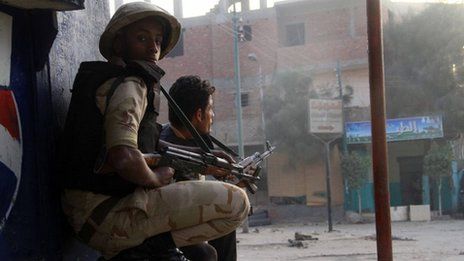 A security raid in the early hours of Wednesday morning in Qanater, Qalyubiya Governorate left eight dead, including two high-ranking military officers and six described by the Armed Forces as “terrorists.”

An army colonel and brigadier general were killed during the raid, according to the Interior Ministry.  Both men were said to be bomb disposal experts.

Security raided the village of Arab Sharkas in Qanater, part of a joint operation by police and military forces, targeting individuals purportedly involved in Saturday’s Mostorod incident in which six Armed Forces conscripts were gunned down at a checkpoint on the Cairo-Ismailia Road.

Ahmed Helmy, assistant to the interior minister, told Al-Masry Al-Youm that four people were captured, five killed and a number of weapons seized in the raid that took place early Wednesday morning.

Helmy said that the Interior Ministry will continue to comb the area, looking for those accused of involvement in a number of recent terrorist attacks.

Al-Masry Al-Youm reported that the aim of the raid was to arrest those allegedly involved in the Mostorod shoot-out, January’s Cairo Security Directorate bombing as well as the murders of Interior Ministry official Mohamed al-Saeed and National Security Agency officer Mohamed Mabrouk.

Qalyubiya Governorate’s Directorate of Health Affairs put local hospitals on high alert to transfer the bodies of the victims and wounded. Six ambulances were sent to transport casualties and medical supplies for the injured, according to Al-Masry Al-Youm.

Security sources confirmed the death of two military engineers and the injury of a police major and 30-year-old housewife shot during an exchange of fire with the militants.

Interior Minister Mohamed Ibrahim said the security presence in the area would be intensified in conjunction with calls by Muslim Brotherhood supporters to go out and march on Wednesday.

Prime Minister Ibrahim Mehleb expressed his condolences to the families of the officers killed, adding that God would help Egypt prevail in the battle against “the forces of darkness and terrorism,” privately owned daily Al-Shorouk reported.

A statement on the official Facebook page of Armed Forces spokesperson Ahmed Ali said that the military “mourns with great sadness and sorrow the martyrs of the nation.”

The statement described the targeted area as “a terrorist hub that is used to manufacture, prepare and store large quantities of explosives and explosive belts and other weapons.”

On Saturday, following the Mostorod incident, military spokesperson Ali issued a statement describing the assailants as “an armed group belonging to the Muslim Brotherhood.”

The Muslim Brotherhood released a statement the following day denying the accusation that they were responsible for the killings.