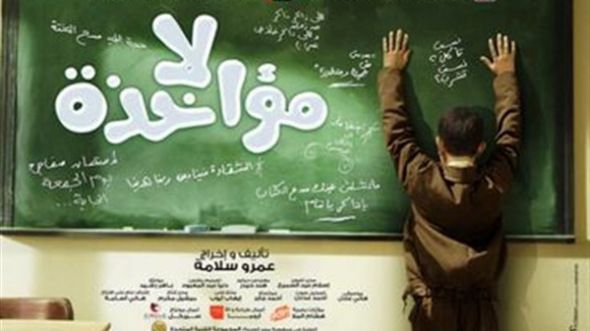 “La Moakhza” (Excuse My French) is about a Christian boy from a wealthy family who has to switch his private school for a standard state one after his father suddenly dies. He’s mistaken for a Muslim like his classmates, and gets an unexpected insight into casual anti-Christian prejudice.

The film distinguishes itself from previous Egyptian productions about sectarian strife in that it’s not about violence but everyday discrimination. It’s a clever and brave decision: to point out there’s a problem when people are being killed is one thing, but to acknowledge that the introduction to such events is in our daily behavior is harder.

The film is directed and written by Amr Salama, who has made two other feature films, first a thriller, “A Day Like Today” (2008), then “Asmaa” (2011), about a woman with HIV, as well as various ads and music videos. Like these previous films, “La Moakhza” is trying hard, but it misses the mark.

In a brief jaunty introduction to the pre-disaster life of young Hany Abdallah Beter (Ahmed Dash), an Ahmed Helmy voiceover introduces Hany and his mum and dad, and the bank where his father works, and the fancy school where he does interesting science experiments, and the family watching his favorite British football team or “Seinfeld.” Everything is sunny and clean, with clear flat colors, and the characters pose for the camera, constantly smiling, like in a children’s picture book.

After the sudden breakfast-time death, there are no more cozy English lessons with his dad and there is no credit left to watch satellite TV. He mustn’t talk about religion or make any friends, Hany’s mum (Kenda Alloush) warns him before dropping him off at his new school where everything is dusty and yellow. “Your mum’s hot,” is the first thing that anyone says to him, before a staff member herds the students into rows in the courtyard with a large stick.

Life is pretty brutal at school, there are blades everywhere, the teachers are hilariously bad in a realistic way, the canteen is a kiosk surrounded by the competitive scrum you find at Cairene fast-food joints during meal times, and the school bully picks on Hany because he’s posh.

There are moments of humor and discomfort that make the film worth watching.

By employing comedy and avoiding the melodrama other movies and soap operas (such as Rami Imam’s 2008 film “Hassan w Morqos,” TV series “Awan al-Ward” (2000) and “Arafa al-Bahr” (2012)) use to deal with sectarian strife, telling details arise. Hany is shown the empty, derelict Christians’ classroom and hears some ugly insults for the first time. “Christians are easy to spot,” his guide informs him. There’s an uneasy moment when Hany reads the Quran hidden inside the Bible at home.

Salama was also clever to chose as his setting the world of children and schoolyard bullying, in which hatred, ignorance, violence and politics are in their most primitive form. Along with humor, this is a relatively safe way to experiment with taboos and sensitive issues in a funny way. Reflecting the basic discourse and acts of hate on children also helps us see how childish they are.

The fact that the kid is bullied for being rich at first, and then treated in a special way when he’s discovered to be Christian — being allowed to score easily during football, for example — is also a good reminder that discrimination isn’t always just about aggression but about remembering someone’s difference.

Unfortunately Hany’s wealth — or at least the way it’s treated — is also one of the downsides of the movie. The cartoonish narrative about a posh life at the start is in Egyptian reality a very sensitive example of isolation and lack of social equality. It seems like the film is about to point this out, make fun of this “perfectness,” and put the classes into an interesting conversation. But the start remains the happiest part of the film, which seems to idolize the elite and what it possesses, while the poorer class is mostly to blame for all the nastiness, without any reference to any larger, institutional reasons for it. Hany, the rich Christian, is by far the nicest kid in school, a shining example to everyone else apart from one especially tolerant, attractive blonde teacher.

At one point Hany’s mother interrupts the headmaster’s familiar meaningless rant — a nice parody — about how Muslims and Christians have always lived in peace and harmony to say proudly: “Nobody can persecute us!” One can’t help feeling that it’s easy for her to say because of her class — especially as she keeps thinking about emigrating — but she can’t be speaking for all Egyptian Copts.

Another problem with the film is the way it’s made. While there is some good acting, especially on the part of the children, the director’s earnestness combined with a lack of craftsmanship means that the film is hardly enjoyable as a film. One reason for this is how full it is of talking. Right from the children’s-book beginning everything is spelled out, often more than once, for the audience. Between the characters’ dialogue and the voiceover, there isn’t more than five seconds of wordlessness at a time, meaning that the medium never gets a chance to do what it can do and just show things visually. With everything verbal, there’s no room for reality’s more mysterious complications. On top of this there’s a constant layer of sprightly music, which turns slightly melancholic when things are looking bad.

The film’s climax is a predictable cliché, while its general visual style — stiff, with everything clearly and symmetrically framed — also feels oversimplified and thoughtless. The overall effect is joyless and condescending, a bit like an advertisement. Only a few moments manage to transcend this instructional feel, especially scenes between Hany and his friend Momen (played with verve by Moaz Nabil), who teaches him about the “real” Egypt.

“La Moakhza” is a courageous film with an important message, and one that apparently had to be modified several times before getting past the censor. But despite its humor and the fact that it’s showing things that haven’t been shown on film before, it’s ultimately an artistic failure with a classist subtext.

AD
You Might Have Missed
What we talk about when we talk about trees
Mugamma revisited: Reimagining the building and the square
Where do old lesbians go to die?
Carbon Colonies & A Green New Deal
AD
Jenifer Evans  @jniferrl
40 articles on Mada