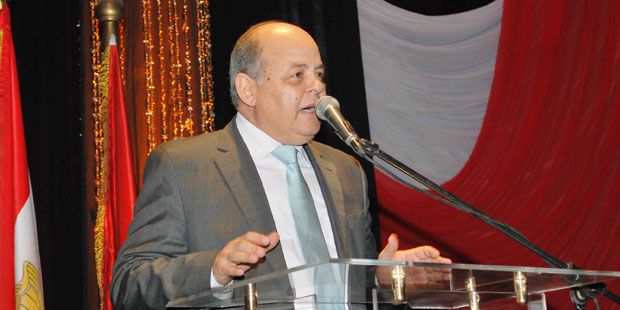 Saber Arab was appointed culture minister for the fifth time on Saturday, in new Prime Minister Ibrahim Mehleb’s Cabinet. This was a choice based neither on Arab’s exceptional merit nor his overwhelming popularity.

Harb was criticized for not being a cultural figure, as well as for his dubious political affiliations. Many in the culture community had hoped the post would be held by a politically neutral figure, while others want a more revolutionary face to bring about change. In heated discussions on social media, it was argued that Harb met neither of the two criteria. He is a founding member of the National Democratic Front, and was formerly a member of Hosni Mubarak’s National Democratic Party’s policies committee for four years before resigning in 2006.

Both Megahed and Gharib were criticized for their long-standing positions at the Culture Ministry, and are hence perceived as belonging to the “old regime.” Mohamed Sobhi declined the post after much criticism for his stringent support of the Supreme Council of the Armed Forces back in 2011, while the reasons for Camilla Sobhi’s sidelining remain unknown.

Arab was thus, once again, the one to take the post. Although he introduced no major changes to the status quo during his previous tenures, he remained the least disagreeable nominee.

Six different ministers have taken office since January 2011. Even the most revolutionary among them, Emad Abu Ghazi, was unable to meet the aspirations of artists and creative workers with regard to bringing about real change in the state bureaucracy. The Culture Ministry has been in the shambles for the past three years, since the removal of long-standing Culture Minster Farouk Hosni during the first 18 days of the revolution. Hosni had held office for a strong 24 years.

In addition to existing challenges of centralization, overstaffing, rigid bureaucratic procedures, and the many corruption charges leveled at past ministerial projects, new ministers have had to work with a diminished budget after the Culture Ministry’s separation from the Supreme Council of Antiquities — one of its main financiers — and the absence of a parliamentary or legislative body to amend existing problematic laws.

During and following the 18 days, various non-governmental institutions, cultural managers and artists met and proposed changes to the ministry which ranged from decentralizing it and limiting its role, to sponsoring local cultural production, to cancelling it altogether. As with awaited reforms in other state institutions over the past three years, very little has changed.

Successive culture ministers have all failed in fulfilling any of these aspirations, with some resigning within only a few days. Literary critic Gaber Asfour served as culture minister for less than two weeks in Prime Minister Ahmed Shafiq’s Cabinet. He resigned on February 9, 2011 citing health problems, although it is widely believed that his resignation came after the poignant criticism he received for accepting the post in Mubarak’s last government.

Asfour was succeeded by the head of Zamalek’s Sawy Culture Wheel, Mohamed Abdel Moneim al-Sawy. Yet Sawy was also pressured to resign after group of artists and performers protested his appointment for days outside the ministry building. Their concerns at the time stemmed from the repeated censorship incidents that had taken place at the Sawy Culture Wheel on the grounds of protecting “public morality and social norms.”

The next appointment, of Abu Ghazi, was met with approval by the artist community. And indeed, during his nine-month tenure Abu Ghazi began gradually decentralizing the ministry’s operations and opening it up to the non-governmental sector. He resigned, however, on November 20, 2011, protesting the military-led government’s response to the deadly Mohamed Mahmoud Street clashes, and was replaced by Shaker Abdel Hamid, a professor at the Academy of Arts, in Prime Minister Kamal Ganzouri’s Cabinet on December 7, 2011. In May 2012, Ganzouri shuffled the Cabinet and replaced Abdel Hamid with Arab.

Arab was among the few who agreed to take on the position given the persistent challenges. Since then he has been repeatedly reinstated to office, only interrupted by the short tenure of Muslim Brotherhood-affiliated Culture Minister Alaa Abdel Aziz, whose background and decision to fire a number of long-standing Culture Ministry officials in mid-2013 triggered a wave of protests and a lengthy sit-in at the Cairo Opera House Grounds in Zamalek to demand his removal.

But even before former Prime Minister Hesham Qandil chose to replace Arab with Abdel Aziz, Arab had resigned twice. The first time was in June 2012. He left his post to be allowed to win a state prize for social sciences worth LE200,000, which sparked controversy at the time, and was later re-instated by Qandil — he had not won the prize. The second was in January 2013 to protest the state’s crackdown on protesters in the aftermath of former President Mohamed Morsi’s controversial constitutional declaration. But he returned to his position shortly afterwards at the request of Qandil.

Arab was replaced by Abdel-Aziz in the cabinet reshuffle of May 2013, and was re-instated with the fall of Morsi in July, although Cairo Opera House director Inas Abdel Dayem was initially poised for the position.

Before taking on the position, Arab, a professor of history at Al-Azhar University, had served in various positions at the ministry under the leadership of Hosni. He had also been chairperson of the General Book Organization and the National Library and Archives from 2006 until May 2012.

Arab has made numerous promises to reform the ministry and direct more resources to Egypt’s rural areas. But since Mehleb’s Cabinet is unlikely to last beyond the upcoming presidential and parliamentary elections, members of the cultural scene are not holding their breath.

Topics
Related
Cairo bombings
No liaison between antiquities and culture ministries to renovate adjacent museums
Minister of Antiquities Mohamed Ibrahim and the chairman of the Egyptian National Archives Abdel Nasser
Al Mawred Al Thaqafy
Culture, the state, and the culture of the state
I thought it appropriate to start this article with an excerpt from a poem by the famous Palestinian
Alaa Abdel Aziz
Ex-culture minister investigated for indecent behavior
The prosecution referred former Culture Minister Alaa Abdel Aziz to investigation regarding allegations