The 7th edition of the contemporary art biennial Meeting Points consists of a series of exhibitions taking place from last September to June in Zagreb, Antwerp, Hong Kong, Moscow, Beirut, Cairo and Vienna. Each show is different, though contributing artists overlap. Meeting Points is organized by the Belgium-based Young Arab Theater Fund, and aims to contextualize the work of artist related to the Arab world.

The title of this edition, curated by WHW (What, How and for Whom?), is taken from Frantz Fanon’s book “The Wretched of the Earth” (1961), and it points, the blurb says, to “revolt, forms of neo-colonialism, counter-revolution, co-optation, and counterstrategies for subverting oppressive infrastructures.” It is currently the last week of its Cairo leg at the Contemporary Image Collective.

Sanja Iveković’s “Figure and Ground” (2005–2006) is the first piece you see: Several black frames are mounted on two walls painted green like a green screen. Each contains two A4 pages. One is from a fashion spread in a September 2011 issue of the now defunct British magazine The Face, in which models have guns and balaclavas and look scruffy. The other bears a media image showing real-life fighters who look similar to the models. 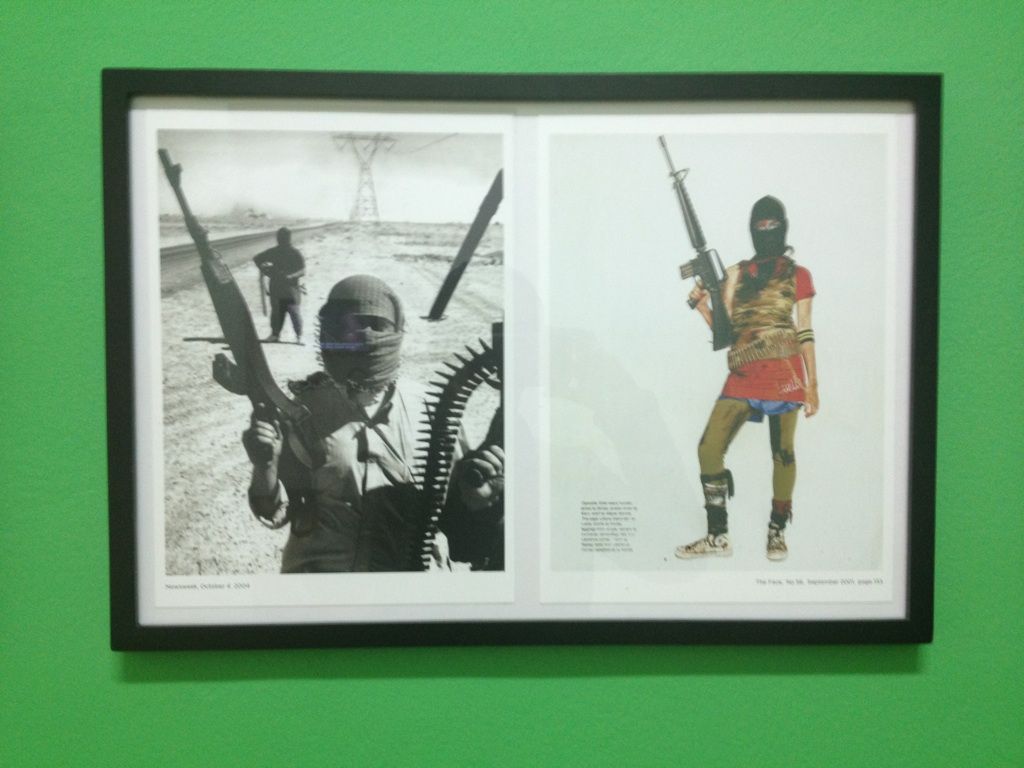 Iveković has used a similar technique to make more complicated, wider-reaching points before. In “Double Life” (1975) she paired images from various magazines with snapshots of herself in vaguely similar positions to the models, creating a strange effect. “Women’s House” (2002-2009) collaged testimonies from women about domestic violence, along with the woman’s name, onto adverts featuring glamorous women wearing sunglasses. “Figure and Ground,” though, can come across as just a critique of one particular photoshoot.

“Did You Kiss the Dead Body?” (2012) by Rajkamal Kahlon also modifies found documents. Nineteen A4 pages of autopsy reports are stained pinkish colors and drawn over in black pan. The drawings are generally ghoulish but vary in style from silly childlike fantasy to straight-up copies of anatomical diagrams, and from precisely drawn to clumsy. This eclecticness gives the project a distracted edge and contrasts with the deadly seriousness of the violent ends described in the reports underneath.

The other piece by Kahlon, however, is subtler and tighter. “Charges and Allegations” (made the same year) is an A2 reproduction of an 1888 announcement in the British Times. “Portraits of the Irish Members of Parliament Against Whom the ‘Times’ Proposes to Give Evidence of its Charges and Allegations of Terrorism,” says the caption, and above, 66 etched monochrome portraits of stately looking men are reproduced. It was part of a series of allegations the Times made during the Land War in Ireland, later found false by the Parnell Commission. In gouache, Kahlon has added to a handful of the men some sort of “ethnic” headwear — ranging from the keffiyah to the turban.

One poster is framed on the wall, but there’s also stack of them so viewers can take one away. It is simple, visual and doesn’t really explain itself, but the gist of its meaning is immediately felt.

This video is produced by Medrar.TV and is featured in partnership with Mada Masr

Iman Issa’s “The Revolutionary” (2010) is a 6-minute spoken portrait made in a deep mechanical voice that you listen to in wireless headphones. The speech is effectively confusing in that it is serious and dense, but there are mythical-sounding clichés and contradictions in the description that are obvious enough to make you smile. It’s difficult to know what to make of it, but that feels like a good thing; it highlights in a non-didactic way the hollowness, the necessity, and the evocativeness of not just the term “revolutionary” but any term.

Maryam Jafri’s “Independence Day 1934-1975” (2009-ongoing) is a series of small black-and-white photos stuck in apparently arbitrary patterns on two walls. They are from the independence ceremonies of 23 African and Asian countries, and they look uncannily similar to each other — the protests, the dignitaries, the interiors of official buildings, the first addresses to the new nations, and so on. It hints at both what went on before to trigger the protests that started these transformations, and the hopes that people had then, unaware that colonialism would leave such a long dark shadow over the countries it looted.

They are rather spread out, making you jump around a bit, holding the map print out which tells you the date and location of each photo. On Jafri’s website, a small sample of them are shown in tight rows, which makes them easier to see together.

Jumana Manna’s “A Sketch of Manners  (Alfred Roch’s Last Masquerade)” is a 12-minute video made in 2013. Alfred Roch, a politician, landowner and Palestinian National League member, apparently threw Palestine’s last masquerade in 1942. The film is visually stunning, centered around the party with fabulous period costumes, elaborate make-up and beautiful people. There are nice shots of someone lying on a couch, of the luxurious interior of a house and of people talking together, before a long finale in which the actors pose to match an archival photo that hangs framed in the same room as the video. 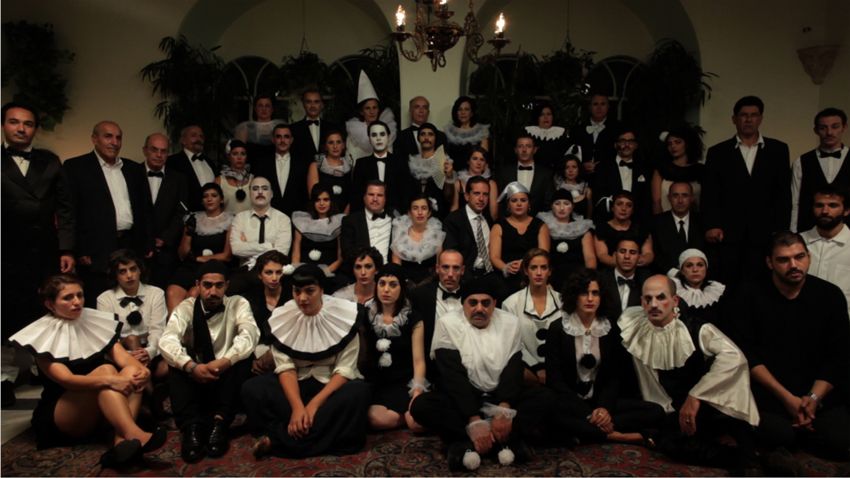 The film looks big-budget and is a joy to watch, but the sound is a let-down: Dripping noises alternate with quintessentially old-sounding music and a deep voiceover either reading out a Baudelaire poem or saying a bit about what the film’s about. It doesn’t add up to a narrative and the sound, which seems nothing more than fitting, is a distraction that makes it harder to focus on the images.

Basma Alsharif’s 19-minute film “We Began by Measuring the Distance” (2009) is poetic and improbable like a children’s book that deals obliquely with a tragic subject. It is playful, even humorous, yet drops in half-references to horrific events in Palestine, making it seem coy or even cynical — we are told of arbitrary measurements between things, but as the subtitles’ words precisely fill a space between two trees, the numbers lose their arbitrariness and acquire political meaning: 1948, 1967. Perhaps because we know that communicating such events is impossible, and with its flights of fancy it acknowledges that, the film is mysteriously powerful. It ends with shaky footage of an unidentified woman screaming in shock, played in painful slow-motion.

The other works are Rosalind Nashashibi’s intriguing 16mm film “Carlo’s Vision” (2011), based on a bit of Pier Paolo Pasolini’s unfinished novel Petrolio, and Cecilia Vicuña’s video “What is Poetry to You?” (1980), where she asks people in the streets of Bogotá the question of the title. There’s also copies of “How to Disappear” by Haytham El Wardany (the show’s only male presence) to take away. It’s the first book in the Kayfa ta series, a project by Maha Maamoun and Ala Younis (soon to be profiled on Mada).

The show has a lot of potent baldly political content, but it manages to just about balance the edifying with the whimsical. Despite arguably having an excess of content, it doesn’t often feel like you’re being told what to think about these things. It is rather video-heavy and will take you a long time to get through, if you look at everything. But it’s worth it: It’s a meaty show of strong individual works, and an almost all-woman one, and you’re unlikely to see anything like it in Cairo again soon.

Meeting Points 7 is at CIC, 4th Floor, 22 Abdel Khalek Tharwat, downtown Cairo, until March 8. The final screening, of Marta Popivoda’s “Yugoslavia, How Ideology Moved Our Collective Body,” in the accompanying film program will take place on March 5 at 7pm.

AD
You Might Have Missed
What we talk about when we talk about trees
Carbon Colonies & A Green New Deal
Where do old lesbians go to die?
Mugamma revisited: Reimagining the building and the square
AD
Jenifer Evans  @jniferrl
40 articles on Mada

Topics
Related
Contemporary Image Collective (CIC)
Greetings to those who asked about me
Lina Attalah | Lina Attalah reviews an art exhibition about imprisonment at Cairo's Contemporary Image collective.
Beirut in Cairo
A certain moody power
Mia Jankowicz | I have no issue with cryptic works, if there’s enough to tantalize a committed viewer, says Mia Jankowicz
Doa Aly
Dissecting Ovid: A review of Doa Aly’s ‘The House of Sleep’
Ismail Fayed | The artist had dissected her own drawings and exploded them in a different scale and to a different medium.
Olia Lialina
Ugly feelings, beautiful ambitions
Mia Jankowicz | Is this what things have come to? Instead of artworks, we get therapy? And why does it feel so good?