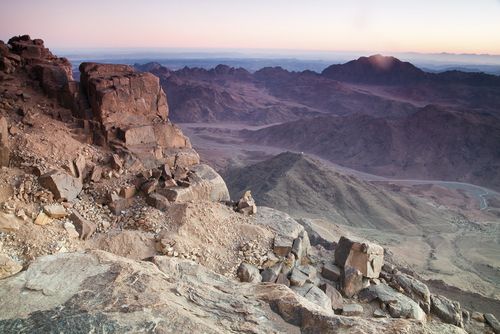 A timeline of the Saint Catherine accident based on testimonies of friends who were involved in the rescue efforts and have been in contact with survivors.

8 am: Eight hikers continue the trek up Bab al-Donia Mountain while three others decide to stay back. They are scheduled to return by 7 pm.

3 pm: A snowstorm hits the mountain.

12 pm: The three hikers who stayed behind go to Saint Catherine and inform members of the local Bedouin community that the hikers didn’t return. A group of Bedouins then head to the mountain to check for them.

6 pm: According to a friend of the surviving hikers, they walk for over 10 hours trying to locate their supplies in the storm.

During their hike, Mohamed Ramadan is separated from the group.

Three of the hikers, exhausted, decide to stay in one place, while the other four, who eventually survived, kept hiking to look for shelter.

One of the Bedouins finds the four hikers and waits with them in a sheltered area in the mountain.

12 am: The other Bedouins return, telling the hikers’ friends that they are all alive but are exhausted, and need a helicopter to bring them down.

6 am: News comes from the Bedouins that one of the hikers died.

8 am: The hikers’ friends in Saint Catherine start contacting Cairo to seek help in finding the missing hikers.

Friends in Cairo call the emergency service and receive no response. They then contact the military emergency contacts announced in the media. The contacts give the callers the number of the military unit in the area, which does not respond.

10 am: One of the guides who was waiting with the supplies in the area the hikers were supposed to return to goes back to Saint Catherine and files an official report that the hikers are missing.

In Cairo, the father of one of the missing hikers reaches the minister of interior, who informs him that a plane would rescue them immediately.

For hours after, that authorities keep telling families and friends that the plane will take off soon.

1 pm: Thirty Bedouins reach the four hikers who had found a shelter and give them supplies. Shortly after, 20 soldiers and an officer also reach the hikers. The soldiers are dressed in their usual uniforms, not equipped for the storm and are themselves exhausted.

2 pm: Friends and families are informed that the plane won’t take off that day because the Saint Catherine airport is not equipped for a night landing.

5 pm: A plane locates the survivors, but doesn’t land to pick them up.

The military inaccurately announces on its official spokesperson’s page that it has rescued four foreign tourists from the mountain.

Throughout that night, all the families who contacted the police or hospital in Saint Catherine are told that their sons and daughters are fine and in the hospital. Only Hagar Ahmed’s family is able to confirm her death, as they are in Saint Catherine.

6 am: Bedouins gather the bodies of the three deceased in one place to make the pick-up easier and confirm that Mohamed Ramadan is missing.

6:30 am: The plane picks up the four survivors and an ambulance takes them immediately to the Saint Catherine hospital, which eye-witnesses say was ill-equipped to deal with their trauma.

8:00 am: The plane goes to fuel in Abou Redeis. It stays on the ground for hours, telling the hikers’ friends — who were urging the officials in the airport to take off to try to locate Ramadan — that there were no orders to take off again.

Ihab Qotb, one of the survivors, draws a map of where he last saw Ramadan with the help of the Bedouins.

When Abdelrahman Selim, a friend of the hikers who was present in Saint Catherine to help in the rescue efforts, informs the officer in charge that they had determined a 1 km parameter where Ramadan was last seen, the officer informs him that the plane can’t move until they determine his exact location.

11 am: Police inform friends that the plane will not take off again that day because the soldiers who are needed to support the plane on the ground have been on the mountain since Monday, are exhausted and need to return.

5 pm: The authorities — including police forces, governorate officials and military — leave the airport, leaving only friends and families of victims there.

10 pm: Military spokesperson announces that the military has located the three bodies of the victims and will transport them in the morning, and that search efforts are still ongoing for Ramadan.

5:30 am: Bedouins head to the mountain to look for Ramadan. They find his body in the parameter determined the day before with Qotb’s help.

9 am: The plane picks up the three bodies from the mountain and transfers to Saint Catherine hospital. Another plane is dispatched to pick up Ramadan’s body.

8 pm: A psychiatrist meets the survivors, then allows the police to take their testimonies in his presence.

AD
You Might Have Missed
Carbon Colonies & A Green New Deal
Mugamma revisited: Reimagining the building and the square
What we talk about when we talk about trees
Where do old lesbians go to die?
AD
Heba Afify
117 articles on Mada