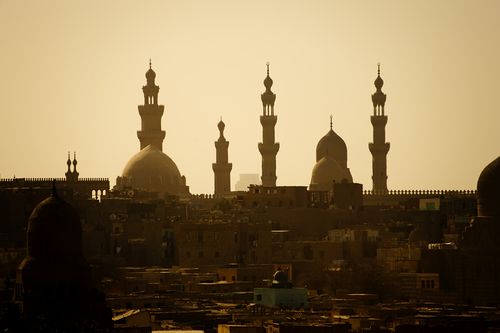 A young girl with a long headscarf was sitting on the floor listening to the Friday sermon in the almost-empty women’s prayer section of a mosque in the northern neighborhood of Matariya. Her face showed no emotion while she listened to the imam’s monotonous speech on repentance.

The preacher was clearly defying a decision by the Ministry of Religious Endowments to unify the topic of Friday sermons across the country.

In a press conference announcing the new policy three weeks ago, Minister of Religious Endowment Mokhtar Gomaa said it does not aim to impose further restrictions on religious freedom, but to keep mosques away from political and partisan conflicts.

The Muslim Brotherhood and other Islamist groups have used mosques as sources of influence and gathering places, critics say. The authorities — who are carrying out a widespread crackdown on the once governing Islamist group — have taken several steps to try asserting their control over the religious field, from ordering the closure of zawiyas (small neighborhood mosques) to imposing new restrictions on who qualifies for the position of preacher.

Gomaa added that the move comes also amid the ministry’s effort to “modernize” religious discourse. The decision will help imams to address the needs of their audiences and make religious discourse more connected to people’s interests and daily issues, he said.

According to the ministry’s official website, last week’s proposed topic for the sermon was “logical thinking and sciences.”

“By doing this, the sermon will improve and unify the nation, instead of being the source of its disintegration by talking politics,” Gomaa said.

The vast majority of Egypt’s 150,000 mosques are run by the Ministry of Endowments, and their preachers are all government employees.

In its decision, the ministry said that only the topic of the sermon will be unified, and that some material will be given to imams as guidelines to help them prepare for the sermon, giving leeway to every imam to address the subject in the way that suits his audience.

Hoda Mohamed says that she only attended the sermon in the mosque because it is a few steps away from her home.

“Although it is preferable that women pray in their homes, I feel better when praying in the mosque. As for the speech itself, it makes no difference for me if it is unified or not. It remains boring,” Mohamed says.

Mohamed was one of two women who attended the sermon that day. On the mosque’s first floor, where men pray, the space was almost full.

The young university student complains that while the imam spoke about repentance, which is a very emotional topic, she was not affected by his words.

For Mohamed and many of those young people of her generation, Friday sermons have become a tradition that should be practiced, regardless of its real impact.

“Look at the imam and those around him. No one is interested, not even the imam himself,” Mohamed says while peeking from behind the curtain that separates the women’s section on the mosque’s second floor.

“The topics are redundant, imams use outdated and monotonous rhetoric, and in many cases their information is wrong and has no real basis. They always talk to us about how our sins will be the source of our torture when we are buried in our graves, how God is not happy with Muslim nations and how the youth are corrupt and naïve,” she explains.

Based on interviews conducted with people who attend several different mosques, it seems imams have defied the government’s decision by addressing topics different than those imposed by the ministry in its official website.

The topics of the last three weeks were “the role of the youth in building society,” “hope and works” and “logical thinking and sciences.” Next week’s sermon should address environmental preservation and development.

Sheikh Ahmed al-Bahey, general coordinator of the Imams without Constraints movement, says that imams defied the ministry because it was incapable of properly monitoring the implementation of its decision.

The Imams without Constraint movement was launched last year, when the Muslim Brotherhood was in power, to call for the independence of imams and to fight against what members considered to be the political exploitation of mosques.

“In addition, the issue was badly framed by the ministry,” says Bahey. “The ministry should not have framed it as an attempt to unify Friday sermons, because the declaration gave the impression that Egypt is implementing policies similar to those in the Gulf region where the ministries impose one speech to be given during the Friday sermons.”

One imam who has been leading the prayers for 30 years in a village in the Delta governorate of Gharbiya says that rather than present the government’s suggested topic as his own sermon, he told the people of his village: “This statement on hope and work is what came to us from the Ministry of Endowments.”

The imam asked to remain anonymous for security reasons.

The topics imposed by the ministry are outdated and distant from the needs of the people, the imam asserts.

“How can I talk about youth and the role they play while they are killed in cold blood in the streets, and those who are not already dead are hopeless and jobless and their utmost dream is to flee the country?” he asks.

Bahey says that imams used to give “dead” sermons on topics that are completely traditional and outdated.

“Those who give untraditional sermons usually preach on politicized issues, which mostly led to political polarization as we have seen recently,” he explains.

“Even if the sermon topic is unified, we need well-educated imams who are loved and respected by the public and can address these issues properly. The state has no right to define what I should know about my religion, especially that we are supposedly living in a ‘secular’ country,” dentist Mohamed Shaker says.

Others who closely followed the recent Friday sermons note that many of those imams who adopted the suggested sermon topic gave it a political twist. Respondents noticed that this happened in mosques affiliated with Islamist NGOs. For example, in a sermon about youth and their role, one imam talked about violations against young protesters and activists.

But some mosque-goers say they would be happy to see a unified sermon and to know what they will be listening to before going to Friday prayers.

“At least I could read about the topic before attending the sermon. When I am more aware of the topic, I will avoid the usual misinformation by the Imams on religious matters,” explains Mostafa Samaan.

In response to the imams’ lack of enthusiasm and criticisms of the government-imposed sermon topics, the ministry has now declared that there will be a poll at the beginning of each month on its official website to enable imams to participate in deciding the themes.

“I guess this will be a middle ground between the imams and the ministry,” says Bahey. “The status quo requires that the sermons should be directed temporarily by the ministry until the country is more stable.”

AD
You Might Have Missed
Carbon Colonies & A Green New Deal
Mugamma revisited: Reimagining the building and the square
Where do old lesbians go to die?
What we talk about when we talk about trees
AD
Mai Shams El-Din
161 articles on Mada