Street noises, an alarm clock and the soft voice of Asmahan wake Attia up to his mundane existence and the photograph of E.T. lurking on the aged walls of his apartment.

Attia hasn’t got much. An average job in a ministerial archive department with no possibility of a promotion for at least 20 years, an engagement to a passable woman whom he has no feelings for, and a shabby home in a pitiable district almost eaten up by neighboring towers.

As long as I could remember, I always knew that Mohamed Khan’s Kharag Wa Lam Ya’od (Missing Person, 1984) was my father’s favorite, and we watched it many times together. But the first time I watched it alone, I realized with a shock that it’s the story of my father’s life.

Attia (Yehia al-Fakharani), the everyman strangled by the weight and noise of the cruel city and worn down by other people’s expectations, is my father. But Kamal Bey Aziz (Farid Shawky), the aristocratic landowner who puts the glam of the capital behind him and builds a new life in the countryside, is also my father. In the end, the life choices both characters make are the choices he desired.

By the 1980s, superstar Farid Shawky had rid himself of the affectations of the malek al-torso (king of the torso) — the macho ibn al-balad who saves the day with his exceptional courage and physical strength — shown off in films such as Niazy Mostafa’s Raseef Nemra Khamsa (Platform Number Five, 1956), to opt for a more relaxed and mature acting method, evident in Missing Person. Here he gives a seemingly effortless portrayal of the content ex-aristocrat, an intuitive old man who appreciates the simple things in life and doesn’t talk much but always looks at peace. (He is also filmed in a way that makes him look gigantic most of the time.)

Kamal Aziz has squandered his wealth and then happily settled for a modest home in Azizia, a small village named after his grandfather, Aziz Pasha. He marries a woman from a humble background but treats her like a queen, addressing her like Turkish aristocrats do their wives: “ya hanem.” He’s a weird mixture of nobility and rawness.

The old wooden dining room of Kamal’s house in Azizia, the dusty French tables and the fading black-and-white family portraits and the antique Christofle cutlery show a wealth eaten by time, a faded aristocracy that has been embedded too long in the mud of the village. The brilliant director of photography, Tarek al-Telmessany, highlights this with a number of quirky shots: an off-center close-up of a thick carved table leg or a broken marble table, a lingering shot of an antique Sevres saucer.

In the 19th and 20th centuries, landowners’ land was cultivated for them — very rarely did they work the land themselves. But there’s something special about people who patiently plant and cultivate ancient earth. After a while they’re likely to become one with nature and everything that is old and deeply rooted, like an 80-year-old lemon tree. Missing Person probes the psyche of nature-loving human who holds on to his past, the aristocrat who fell in love with the land. Kamal feels real — as real as my father. (Incidentally, Kamal drives a 1940s Buick in the 1980s, and my father too drove his 1956 Studebaker until the mid 1980s.)

Kamal takes his eldest daughter (played by Leila Elwy) out of school to manage the land and teaches her how to drive a car and a tractor. Elwy, who normally just played beautiful women in a not very interesting way, showed that she could act in this film, and her character is unusual — a tough and special kind of farmer, elegant in thick warm socks.

Meanwhile, Attia leaves Cairo for the village to sell his three acres of land to Kamal so he can buy an apartment and marry Zeinat, his atrociously made up fiancée.

Attia doesn’t express discontent with his urban lot. On the contrary, he clings to his grey city life and is appalled by the unrefinedness of Azizia and sickened by the 30-egg omelettes the people there eat for breakfast, the fried birds for lunch, roasted meat, and the constant munching on bananas and oranges. Telmessany films close-ups of food being cooked, bread and meat being gobbled, and ducks being force-fed so they grow faster.

The soundtrack is simple yet brilliant. Kamal Bekeer uses one tune to express all the protagonists’ feelings throughout the movie, changing only certain instruments with fluctuations in mood — the violin for a mellow scene but a zither for a more upbeat one. He uses old songs by Asmahan, Mohamed Abdel Wahab and Laila Mourad to sketch a rich audio palette for the village scenes, while in the city it’s the loud Adaweya jingle, Za’am ya Donia Za’ama (a Salah Jahin-penned song considered to have acted as a significant bridge between intellectualism and mainstream culture in Egypt).

Attia meets Kamal in a protracted scene in which the former is introduced to the suffocatingly slow-moving life of the village. Kamal’s sense of hospitality is manifested in a three-course meal, with lots of interludes of chewing, for the Cairene stranger, who’s told that refusing the fatty feast would turn the deal sour. He eats and eats and ends up in the hospital with a very upset stomach and a deep willingness to settle for any price just to escape his hospitable torturer.

A month later, Attia and Kamal sit in the porch happily gobbling gigantic pieces of bread and eggs. Attia has been transformed. He falls in love with the land as Kamal had years before. Each leaving a life behind, they settle with their roots just like my father finally did. 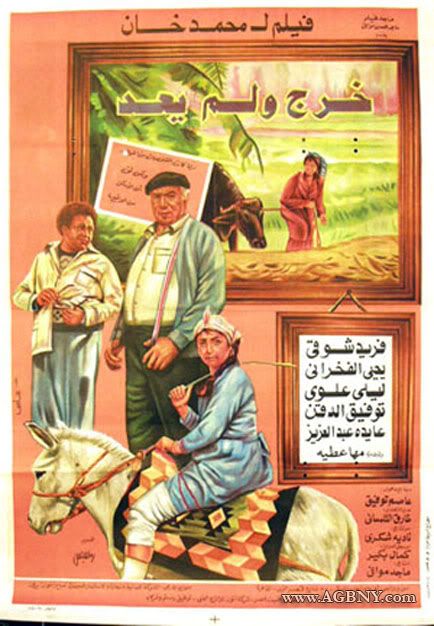 AD
You Might Have Missed
Mugamma revisited: Reimagining the building and the square
Where do old lesbians go to die?
Carbon Colonies & A Green New Deal
What we talk about when we talk about trees
AD
Amany Ali Shawky
89 articles on Mada