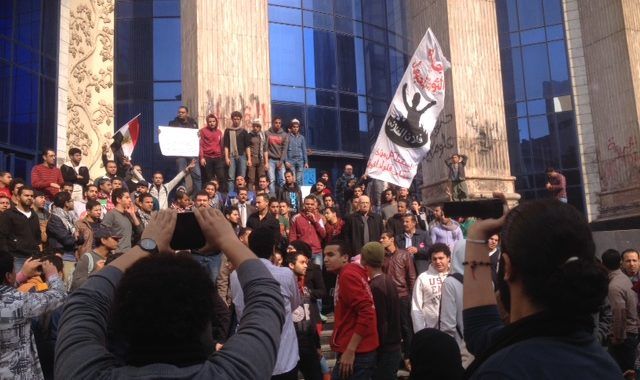 As 20 Al Jazeera journalists stand trial in the Cairo Criminal Court on charges of belonging to a terrorist organization — arguably the most serious escalation against press freedoms since the January 25 revolution erupted ​— Mada Masr presents a brief timeline of the most striking violations committed against journalists from January 25, 2011 to the post-Morsi era.

During the January 25 revolution

Guardian reporter Jack Shenker was briefly detained in a police truck following the police forces’ dispersal of protesters in Tahrir Square during the first wave of the 2011 revolution. Shenker’s audio recording of the beatings and torture committed against activists being held inside the truck went viral.

Video journalist Mohamed Effat, then working for the privately owned Daily News Egypt, was arrested by police forces while covering a protest in downtown Cairo. Effat was heavily beaten before he was released on January 27.

Journalist Ahmed Mohamed Mahmoud, 36, who worked for the privately owned Al-Ta’woun newspaper, was standing on the balcony of his office in downtown Cairo on January 29 when he was allegedly shot by police snipers with live ammunition. Mahmoud was filming protests against the rule of the country’s former strongman President Hosni Mubarak. He died on February 4 due to his injuries.

March 11, 2011: Torturing protesters and journalists in the Egyptian Museum

After military police forces dispersed a Tahrir sit-in, several journalists and activists were tortured inside the Egyptian Museum, including journalist for the privately owned Al-Fagr newspaper Rasha Azab, who was severely beaten and tortured by army personnel. Only her press card saved her from facing a military court.

May 30, 2011: Journalists interrogated by military prosecution

The Committee to Protect Journalists (CPJ) said that Morsi supporters besieged the Media Production City, the center of operations for all Egyptian satellite channels, in retaliation against what they described as the media’s biased coverage. In its annual report, CPJ said that it documented “at least 78 assaults against journalists from August 2012 until Morsi’s fall on July 3, 2013. Muslim Brotherhood supporters, seeking to obstruct coverage of opposition protests, were responsible for 72 of the attacks.”

October 16, 2012: Investigations into talk show hosts for “insulting the judiciary”

Several prominent talk show hosts, including anchors Reem Maguid, Wael al-Ibrashy, Hala Sarhan, Lobna Assal, Sherir Amer and Riham al-Sahly, were briefly interrogated by the public prosecution for allegedly insulting the judiciary while covering the trial of the Battle of the Camel. None of the journalists were convicted of any crimes, but the interrogations were heavily slammed by the media against the backdrop of a series of lawsuits filed against journalists on charges of religious blasphemy, insulting the judiciary and defaming the president.

One of the most flagrant violations against press freedoms was the killing of privately owned newspaper Al-Fagr journalist Al-Houssieni Abou Dief, who allegedly died at the hands of Morsi supporters during clashes in front of the Ettehadiya Presidential Palace. The journalist was shot in the head during the clashes and a pellet lodged in his brain; the victim was held in intensive care for hours before he died. While the Brotherhood-affiliated former Minister of Information Salah Abdel Maqsoud claimed that the deceased journalist belonged to the Brotherhood, Abou Dief’s friends asserted that he was on the side of anti-Morsi protesters when he was shot, and pointed to his stories slamming the Brotherhood’s rule.

The public prosecution interrogated talk show host Dina Abdel Fattah on charges of propagating the “violent ideas and tactics of the Black Bloc,” a group of masked protesters that allegedly adopted violence against police forces and state institutions during the Morsi administration. In an interview with CPJ, Abdel Fattah said that when she broke the story on the Black Bloc she thought that she had a scoop; but “instead, I had more than 300 legal complaints standing against me and eventually I had to leave my work.”

Political satirist Bassem Youssef was interrogated for four hours by the public prosecution on charges of defaming the president and religious blasphemy. Local and international media condemned the charges as a flagrant violation of freedom of expression.

While Egyptians were joyfully celebrating Morsi’s ouster following a declaration by Defense Minister Abdel Fattah al-Sisi, police forces were shutting down television channels affiliated with the Muslim Brotherhood, including Misr 25, Al-Hafez, Al-Rahma and Al-Nas, among others.

Ahmed Assem, a journalist working for the Brotherhood-affiliated Freedom and Justice Party newspaper, was shot in the head while filming clashes in front of the Presidential Guards headquarters in Salah Salem. The last video that Assem shot revealed a military sniper aiming his weapon at the journalist.

Three journalists were killed during the police forces’ violent dispersal of the Rabea al-Adaweya protest camp, which claimed hundreds of lives. The victims included Habiba Abdel Aziz, who worked for the United Arab Emirates-based Gulf News, Sky News reporter Michael Deane and privately owned newspaper Al-Akhbar’s reporter Ahmed Abdel Gawad. Several more journalists were injured on that day, while others reported being assaulted by police forces and having their cameras confiscated.

Tamer Abdel Raouf, a journalist working for the state-owned Al-Ahram newspaper in the northern city of Beheira, was shot dead by the Armed Forces while driving through a checkpoint during curfew. Security forces claimed that Abdel Raouf was driving at high speeds and did not heed repeated calls to stop, provoking suspicion. His friend and state-owned Al-Gomhuriyya newspaper journalist Hamed al-Barbary was injured in the shooting.

Sinai-based, award-winning journalist Ahmed Abu Deraa was arrested in the violence-plagued peninsula and referred to military trial on charges of spreading false news and rumors about the Armed Forces. A military court sentenced him to a six-month suspended sentence.

October 31, 2013: Journalist sentenced for one year in prison by military court

A journalist working for the privately owned Al-Watan newspaper, Hatem Aboul Nour, was sentenced to one year in prison for impersonating an army officer while working on one of his stories. “He did not wear a military uniform, he just created an imaginary character of an army officer to some of his sources over the phone. Yes, he committed a professional mistake, but the punishment was too harsh,” his wife Wessam Abdel Samad said in an interview with the privately owned ONtv channel.

November 3, 2013: Another journalist sentenced to one year in prison by military court

Sinai-based freelance journalist Mohamed Sabry was given a six-month suspended sentence for filming in a military zone, where photography is not allowed.

Twenty journalists working for the Qatari-based television network Al Jazeera are facing an ongoing trial for the case widely known as the Marriott cell on charges of belonging to a terrorist organization, working without permission and other accusations. On February 20 the court moved to adjourn the case to March 5.

AD
You Might Have Missed
What we talk about when we talk about trees
Where do old lesbians go to die?
Carbon Colonies & A Green New Deal
Mugamma revisited: Reimagining the building and the square
AD
Mai Shams El-Din
161 articles on Mada

Topics
Related
Abdullah al-Shamy
The war on journalists
Sharif Abdel Kouddous | In Egypt, journalism can now be a form of terrorism. At least that’s what prosecutors are alleging
Al-Shorouk
Press freedoms: More of the same
In the lead up to the June 30 protests that eventually led to the ouster of former President Mohamed