A special Valentine for Palestine
By
Mada Masr 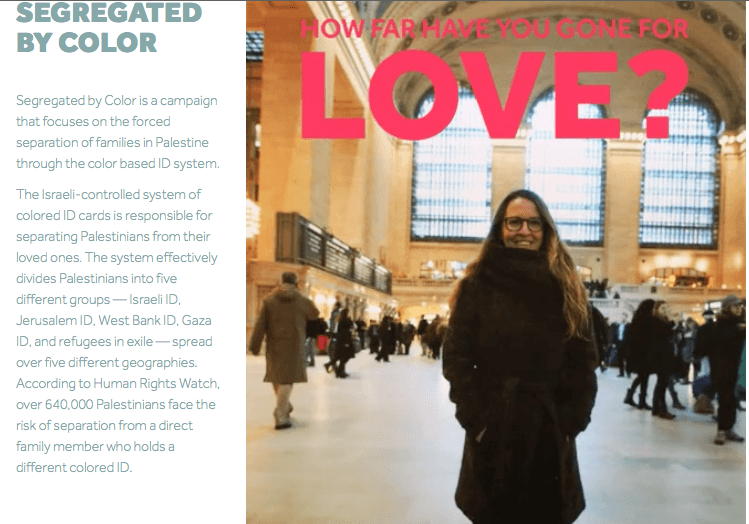 A video produced by the Visualizing Palestine team, which uses design and technology to mediate Palestinian issues in visuals, shows lovers from around the world talking about the sacrifices they make for their loved ones. In the case of Palestinian spouses married to Israeli citizens, sacrifices encompass a multitude of basic rights, from health to education to overall residency.

“It is our collective way of expressing solidarity with families separated by Israeli laws,” says Ramzi Jaber of Visualizing Palestine, which produced the video titled “Speaking Love to Power.”

Photographers contributed to the video from Cairo, Paris, New York City and Dubai as a form of global solidarity with Palestinian separated couples.

According to the video, the case applies to more than 30,000 Palestinians married to Israeli spouses and affected by Israel’s colored ID cards system. A Human Rights Watch report has also warned of the risk of separating some 640,000 Palestinians from their direct family members for holding different colored IDs or no IDs altogether.

The law, passed in 2003 and upheld by the Supreme Court of Israel in 2012, suspends the practice of granting the nationality to spouses of Israeli citizens in the case of Palestinians, amidst the criticism of human rights defenders. In response, Judge Asher Grunis wrote in the court’s judgment that “human rights do not prescribe national suicide.”

The Segregated for Color campaign has also been spearheaded by the Adalah human rights organization, which focuses on the rights of Palestinian citizens of Israel. The organization has contributed to the campaign with an exhibit titled “Families Interrupted“, which features testimonials of families separated and affected by Israel’s citizenship law.

Love in the Time of Apartheid and Love under Apartheid are two initiatives that have also upheld the campaign through petitions, online activity and creative public action.