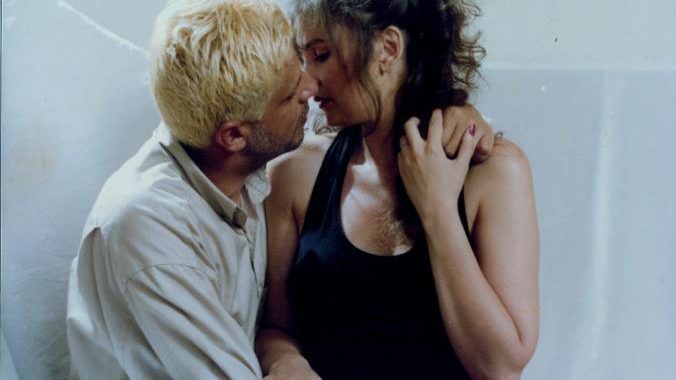 It was the early 1990s and few families could afford to have a VCR. My aunt had one, and nights over at her place meant a treat that my parents could not afford yet — movies. When we rented Yousry Nasrallah’s Mercedes (1993), we spent the whole night laughing. I didn’t understand it, but it made me laugh. A scene in which Nubi (Zaki Fateen Abdel Wahab) meets Afifa (Yousra) for the first time and starts chasing her around screaming, “Mama, mama, mama” still cracks me up.

Afifa, who is a belly dancer that Nubi eventually falls in love with, bears a great resemblance to his aristocratic mother Warda, also played by Yousra. Warda has admitted her own son into a mental hospital because she fears his communist inclinations. The Soviet Union topples, and Nubi leaves the asylum to venture out and find his biological father. Mercedes is the key, his uncle tells him the day he dies, the day his uncle also marries Raeefa, a drug dealer.

We learn early on in the movie that Nubi is not his father’s son; after a one night stand with a Kenyan diplomat, Warda apparently conceived and gave birth to a strikingly blond baby. It was only natural that the baby came out white, because Warda’s mother (Taheya Kareioka) had bathed her for months in donkey milk.

Various dark and paradoxical occurrences — including weird family gatherings and a visit to Raeefa’s drug den — take the protagonist to a seedy movie house where he meets his illegitimate gay half-brother, Gamal (Magdi Kamel), the fruit of a relationship between his mother and his now deceased uncle, Warda’s husband’s brother.

In the early 1990s, gay characters in Egyptian movies were overly femininely and almost cartoonish “sabi al-ra’asa” (belly dancers’ helpers), who talked funny and wore embellished skirts like Mahmoud al-Guindy in Shafeqa and Metwally  (1978) by Ali Badrakhan. Aside from his mentor Youssef Chahine in movies such as Eskenderia Kaman we Kaman (Alexandria Again and Again, 1990), Hadouta Masreya (Egyptian Tale, 1982)  and Al-Nas wal Nile (The People and the Nile, 1972), Nasarallah was the director that put meat on that difficult and abused role. Gamal is an artist who, misunderstood by his bourgeois surroundings, escapes the suburbs to live in a shanty town with his lover. He loves soccer and cinema. He is a human being.

Raeefa, the wig-wearing dealer of drugs and human organs, is also an unusual character for the Egyptian screen. When the movie was made, drug dealers in cinema were mustachioed callous men in galabeyas like Al Bahz, played by Gameel Rateb, in Al-Keif (1986) by Ali Abdel Khaleq (a director whose fingerprints are very obvious in the history of Egyptian cinema despite the fact that he didn’t make that much). Female drug dealers are a rarity in Egyptian cinema – perhaps any cinema. Other than Sanaa Gameel in Hossam Eddin Mostafa’s Hekmetak ya Rab (Your Wisdom O Lord, 1976) and the infamous scene in which she shoves bags of heroin into the intestines of a freshly slaughtered camel, Raeefa pretty much stands alone in that department. (Hossam Eddin Mostafa was brave enough to make action movies in the late 1970s and early 1880s when Egyptian cinema didn’t even know how to do sound effects).

Nasrallah aced freshness, originality and weirdness in Mercedes at a time when the audience wasn’t ready to look beyond the two dimensional silver screen into their own reality.

The film is a microcosm of Egypt in one family: the downfall of communism, the rise of the Islamists, the triumph of capitalism, the boom in drug dealing and organ trafficking, homosexuality and football. It’s all wrapped in a thick coating of dark comedy and pleasant weirdness, like the endearingly strange blond protagonist Nubi.

Mercedes was Nasrallah’s second movie after Sareqat Sayfeya (Somersaults, 1990), which was heavily inspired by his bourgeois Christian family — an element of that also rubs off Mercedes, as Nubi’s family is Christian and rich. Nasrallah would rid himself of his aristocratic origins in 1999 for Al-Madina (The City) though, in which he delved into a Cairene shanty town to tell the story of a young man trying to escape poverty by traveling to France in search of a new life, yet coming back broke and unfulfilled.

Zaki Fateen Abdel Wahab, son of the great singer Laila Mourad and director Fateen Abdel Wahab, played his first movie role in Mercedes.  This may have slowed down the young actor’s cinematic career since the movie did not succeed commercially. He was later picked up by Osama Fawzi for a small role in Baheb al-Cima (I Love the Cinema, 2004) where his quirky genetic acting skills did not shine through enough.

Mercedes can be summed up by a scene near the end, when the head of the Socialist Party tells Nubi, who has always wanted to be a member, that he must not involve the party in “a tale of homosexuality, homicide, drugs, politics, arms trading and terrorism — a tale that has no beginning and no end.”

“This is life,” Nubi answers.

Like most cinematic gems, “Mercedes” did poorly in the box office.

AD
You Might Have Missed
Mugamma revisited: Reimagining the building and the square
Carbon Colonies & A Green New Deal
What we talk about when we talk about trees
Where do old lesbians go to die?
AD
Amany Ali Shawky
89 articles on Mada