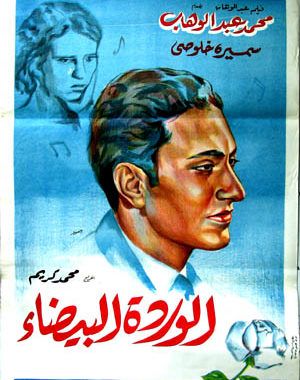 Mohamed Abdel Wahab’s debut film, “Al-Warda al-Beida” (“The White Rose,” 1933), is a typical love story — boy meets girl, they fall in love, society places impenetrable wall between them, boy pursues life of musical stardom to win girl back. The movie is flawed, but it was one of the first popular films to tackle Egypt’s stark class system that still endures today. And the soundtrack is great.

In his autobiography, the film’s prolific director Mohamed Karim (1886-1972) recalls that he met Abdel Wahab (1902-1991) in Zagazig following a performance. Karim had just finished his first film, “Zaynab” (1930), and had yet to begin working on his second, “Awlad al-Zawat” (“Sons of the Aristocracy,” 1932). A potential role for Abdel Wahab was discussed, and the young singer asked Karim if a film could be made based on his own life.  “The White Rose” was the result.

It opens as it means to go on: with an unmistakably upper-class scene. The camera zooms in on a white Persian cat in a French-style neoclassical villa. We are introduced to Raga (Samira Khalusi), daughter of Ismail Bey, a wealthy lawyer. In the opening scene, we move between shots of Raga playing with her cat and shots of her mother being fitted for a rather revealing dress. As the mother furiously puffs on cigarettes, Raga innocently dances around the adjoining room with the cat, listening to what sounds like Western classical music.

When the sound reaches the mother, she sashays off her little dressing platform into the salon to turn off the music, shouting, “Haven’t I told you a thousand times not to play foreign music?” The camera slides across the room’s clearly French-inspired décor: landscape paintings, lavish curtains, statues. This is presumably intended to juxtapose the pure naiveté of Raga against her mother’s wicked elitist nature, a theme which continues to unfold throughout the film.

In the next scene, we meet the hero, Galal Effendi (Abdel Wahab), as he rings the buzzer on a massive wrought-iron gate. He wears a double-breasted suit, a tarboush, and a mixed expression of innocence and aloofness. The director takes pains to show a massive ring on Galal’s finger.

Inside the villa he meets Ismail Bey, a former friend of his recently deceased parents, aristocrats who had lost their wealth and fallen from grace. The lanky, troubled Galal Effendi is forced to ask Ismail Bey for a job. When asked if he will continue his studies past baccalaureate, he replies, “I can’t sir. Because of my circumstances, I am forced to work now to make a living.”

“It’s a very difficult situation, son, that our country is in such a position that the youth cannot finish their studies and must work for the government — they are wasting their future,” says Ismail Bey with a sleazy yet sincere air, puffing on a giant cigar that covers his face with clouds of smoke.

When Galal informs him that he lives in Abdeen (where the film’s director was born), Ismail Bey gasps and tells him to visit him tomorrow so he can set him up. Galal leaves, clearly pleased, while Ismail Bey runs to inform his wife of his interaction with the boy “whose father played with money.” Then they all go back to discussing party dresses.

Most of Abdel Wahab’s seven films, which were all directed by Karim, show quintessentially upper-class scenes. Film critic Abdel Hamid Hawas, known for his 1986 book “Al-Cinema al-Misriyya wal Thaqafa al-Shaabiyya” (“Egyptian Cinema and Popular Culture”), calls them “salon films.” Walter Armbrust’s “Mass Culture and Modernism in Egypt” (1996), which devotes a long section to the film, labels “The  White Rose” an “Egyptian modernist film” because it sought to combine images of authentic tradition and revolutionary transformation. Armbrust says the film’s contribution is that helped define a middle-class identity, presumably embodied by Galal, and had lasting influence in terms of taste.

Galal begins working the next day as rent collector for Ismail Bey’s various properties. As he knocks on doors, we see Galal interact with various types of people in Egypt’s upper class, ranging from an angry Frenchman whom he speaks to in French, a practically deaf tenant who sounds like he is from Upper Egypt, and another Westerner with whom the only verbal exchange is “merci.”

Our star-crossed lovers finally meet when Raga playfully skips down the villa’s front steps wearing a shin-length skirt and buttoned-up blouse. Her pearl necklace breaks and the beads cascade toward the feet of Galal, who has just arrived. Bending down to pick up the pieces, they make deep eye contact and spin away from each other. Galal drops the pearls into her hand and walks off ungracefully towards the clerk’s office. The tragic love affair is set in motion.

Armbrust points out that the scene in which Galal decides to pursue music involves him contemplating in turn portraits of modern Arabic music founder Abdu al-Hamuli (1836-1901); popular singer Salama al-Hegazy (1852-1917), who was trained in Quranic recitation and was a student of Hamuli; and Sayyid Darwish (1892-1923), a singer and composer who rose to prominence with the 1919 revolution, and with whom Abdel Wahab had collaborated before his early death. Abdel Wahab was putting himself in a specific musical lineage.

The film continually takes jabs at the westernized upper classes. In several painstakingly slow scenes, the director portrays the aristocracy as lazy, entitled, nepotistic and overrun by vice. Shafiq, the man Raga is meant to marry, is an even clearer foil between the oblivious upper class and the cultured working man.

At one point, Shafiq wakes up to Raga’s mother knocking on his door mid-afternoon. He’s still in his party tuxedo from the night before, clearly has a hangover, and shamelessly flirts with a woman through the window before his future mother-in-law enters.

Raga’s mother does everything in her power to keep Galal away from Raga. Ismail Bey can’t believe his prized daughter has dared to fall into the hands of the son of a dead gambler.

But Galal keeps cool and calm in his interaction with the decadent elite. Even though his music is rooted in Egyptian tradition, the film suggests, his aristocratic blood and education allow him to easily interact in French, for example.

The film is a valiant but flawed portrayal of class divisions. At times it is rather slow. It has also been criticized for its central love story being too Western (Abdel Wahab was similarly criticized for introducing western elements into his music), and for showing little of Egyptian culture. Yet at the time it was applauded for its nationalism and was a box office hit.

Despite its flaws, “The White Rose” manages to be both entertaining and pertinent. Abdel Wahab’s songs help tie the story together, while binding it to the folkloric tradition he maintained and modernized throughout his 92 years. If you like Abdel Wahab’s music — and it’s hard not to — the soundtrack is remarkable, an evocative journey. Indeed it is only in these segments that one can really enjoy his onscreen presence, because as an actor he is stiff and awkward. Perhaps he didn’t quite know what to do with his arms when he wasn’t holding an instrument.

“The White Rose” makes clear that even before the military took power, and before the Muslim Brotherhood gained influence, Egypt’s colonizers oversaw a crippling class system in which the elite were kings of the castle, and the poor simply unfortunate citizens not to be bothered with. It is now 80 years since the film’s release, and sadly, the social dilemmas seem much the same. Rich men marry rich women and have rich babies, while the poor suffer as a country crumbles all around them. And however great the music, it can’t quite drown out the injustice.

AD
You Might Have Missed
Mugamma revisited: Reimagining the building and the square
What we talk about when we talk about trees
Carbon Colonies & A Green New Deal
Where do old lesbians go to die?
AD
Maha ElNabawi
89 articles on Mada