Saudi aid expected to flow after elections
By
Mada Masr 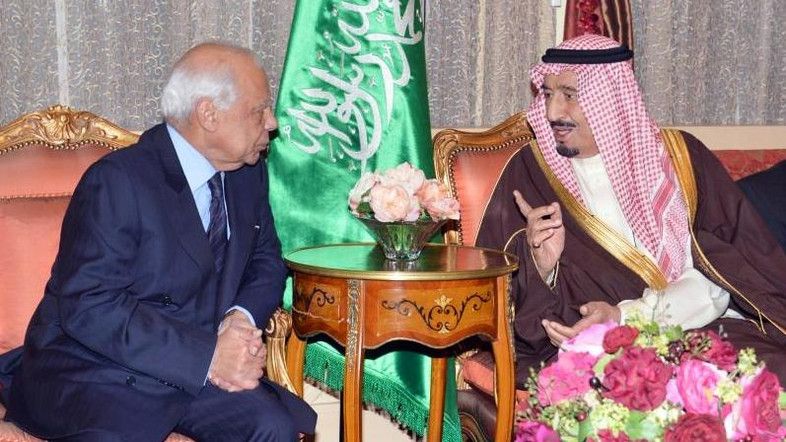 Prime Minister Hazem al-Beblawi arrived in Saudi Arabia on Tuesday for a series of meetings regarding the future of bilateral cooperation between the two countries.

The bilateral talks between Beblawi and Saudi Crown Prince Sheikh Salman bin Abdul Aziz in the Saudi capital of Riyadh began on Tuesday, with aims to revitalize economic aid packages provided by the kingdom to support the economy, which has been hit hard by continuing political unrest.

At a press conference in Riyadh on Wednesday, the prime minister described the relationship between Egypt and Saudi Arabia as a “balancing force” for the Arab region as a whole, saying that “if the two countries get along, everything succeeds, and if not, everything fails.”

Following a frosty period in relations during the one-year rule of former President Mohamed Morsi, Saudi Arabia, Kuwait and the UAE have largely replaced Qatar as a major funder of Egypt’s economy. Since Morsi’s ouster, these states have pledged US$12 billion.

Beblawi said that his visit should be seen as part of ongoing meetings and communication between the officials and the two peoples.

He also passed on a message from interim President Adly Mansour to the Saudi Crown Prince expressing gratitude and appreciation for Saudi Arabia’s support, saying that neither support from Saudi Arabia nor the Gulf states is a new thing.

The cooperation goes beyond economic level, Beblawi said, maintaining that the kingdom is giving full and ongoing support to Egypt on both the bilateral and international levels.

Beblawi briefed the crown prince on developments in Egypt on security, as well as economic and political matters, and the progress on the roadmap, pointing in particular to the constitutional referendum.

In his comments at the press conference, Beblawi said there has been significant improvement in terms of security and stability and that the fight against terrorism was progressing, though it will take time. He claimed that the violent groups are losing impact and popularity day after day and added that all security measures have been taken in accordance with the law.

They also discussed increasing economic cooperation and trade between the two countries. The Saudi foreign minister participated as well, alongside a number of senior officials, according to Egyptian press, while the Egyptian team included the ministers of transport, investment, planning and housing and petroleum.

A government official involved in the talks told Al-Shorouk that he expected a “surprise” from the kingdom by the end of the talks, after progress was made in the road map, in the form of increased funding to support the Egyptian economy. He expected that these additional funds would not come until after presidential and parliamentary elections and so would be part of next year’s annual budget.

Diplomatic sources involved in the preparation for the talks told Al-Shorouk that they expected the volume of Saudi investments in Egypt to increase from $5.4 billion to $6.2 billion. They also suggested that economic aid from the kingdom will double to $4 billion upon the completion of the presidential elections, and will include new projects promoting trade between the two countries.

Minister of Planning Ashraf al-Araby said he presented several projects to the Saudi team that are likely to attract investment and discussed several joint projects.

Beblawi’s comments at the press conference in Riyadh also addressed the composition of his Cabinet. He suggested that a “limited ministerial reshuffle” would be necessary, adding that should Sisi run in the presidential elections — which is looking increasingly likely following last week’s endorsement from the Supreme Council of Armed Forces — then there would be three vacant ministerial seats.

The other two posts are the minister of military production, who passed away at the end of last year, and the minister of international cooperation, a post that was occupied by reformist figure Ziad Bahaa Eddin who submitted his resignation on Thursday.

AD
You Might Have Missed
Where do old lesbians go to die?
Carbon Colonies & A Green New Deal
If they steal Sheikh Jarrah
Mugamma revisited: Reimagining the building and the square
AD

Topics
Related
economy
Shopping for help
Egyptian officials are currently engaging in diplomatic activities in an attempt to revive economic support
democracy
The Gulf and Egypt: Long transitions and Marshall plans
Sultan al-Qassemi | Over the past few years, Egypt’s relations with Saudi Arabia and the United Arab Emirates on one hand,