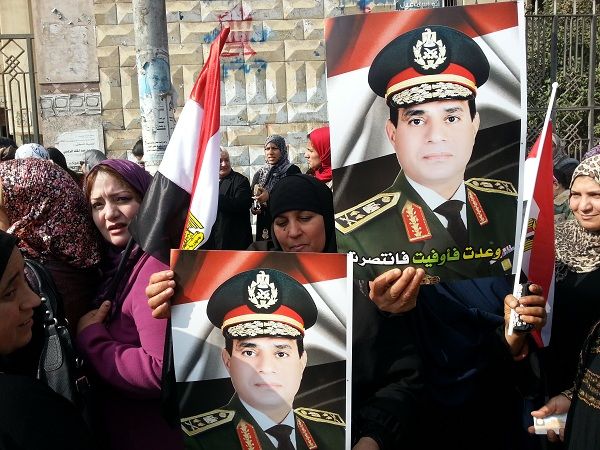 In a highly controversial statement, veteran Egyptian actress Soheir al-Babli said that “Egyptians need a man as strong as Hitler.”

During an interview with privately owned Al-Masry Al-Youm daily newspaper, the actress — famous for her roles in popular theatrical play “Rayya and Sekina,” and the eighties TV series “Bakiza and Zaghloul” — said that she’s optimistic regarding the future of Egypt, regardless of the internal and external difficulties.

“I hope Field Marshal Abdel Fattah al-Sisi becomes the president, and starts implementing radical solutions to fix the problems caused by ousted President Mohamed Morsi and his clan over the year that felt like a hundred for Egyptians,” she added.

Addressing the future president, Babli advised him to “pay attention to education,” and “know that Egyptians need a man as strong as Hitler to punish citizens for any  violations they commit.” Babli said she believes that this policy “will force fear into people, which will stop them from making further mistakes,” adding that “Egyptians should be obedient and observe the results.”

Hitler’s Holocaust victims include over six million Jews, along with millions of others who died during World War II.

Babli believes that the president’s main challenge is to “restore Egypt’s strength and reputation on both Arab and international levels… so that rats go back into their holes and everyone knows their true worth.”

However, Babli is not the first well-known actor/actress to support Egypt’s current defene minister. Early in October 2013, Actor Adel Imam told Al-Masry Al-Youm that Sisi’s name “has been written in history,” and that “he’s a leader by all means, who won the hearts of Egyptians.”

Imam, who embraced Sisi as “a national hero and the future president,” added, “Him being the head of the Armed Forces makes me feel safe; he’s also a hero who can express and defend his ideas and beliefs.”

In mid-January, actress Ilham Shahin, who had tense altercations with and filed complaints against Islamic preaching figures during Morsi’s rule, told private MBC Masr TV channel, “people sided with the army and now with Field Marshal Abdel Fattah al-Sisi,” whom she considered the president from then on, asserting that he has “leadership qualities” that can “develop the country.”