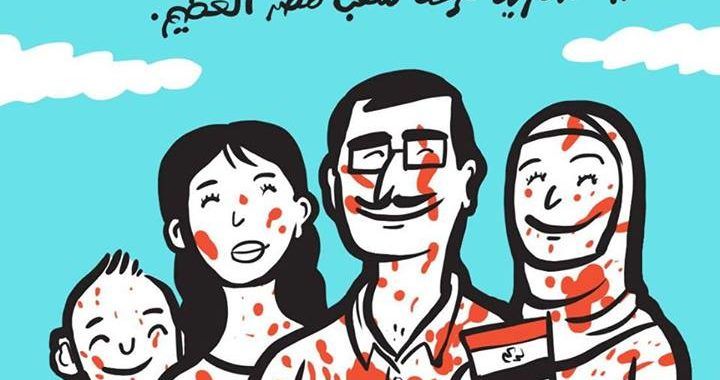 After the January 25 revolution, Egypt’s political sphere was suddenly cracked wide open for stormy debates about concepts that swung between the super shallow and predictable to the extremely deep and philosophical.

The ongoing disagreements and political struggles have generated much re-evaluation, as well as some aggressive reactions. One of the most widely impactful phenomena born during this period is labeling. Due to this labeling, many have complained that opinions are not being discussed as much as the individuals behind them are.

Here we offer a dictionary of terms to use in a conversation about the revolution to demoralize your opponents without having to actually prove your point or try to understand where they’re coming from.

This was the phrase used in the very early days of revolution to describe the masses of demonstrators sitting in Cairo’s central public square, blocking traffic and stopping the tourist from coming to Egypt.

Under pressure from inside and outside, the state-controlled media outlets had to change their tone and stop being aggressive toward demonstrators. The resulting acceptance of revolutionary acts was accompanied by fatherly attempts to contain the demands and isolate them from the possibility of real change.

After the fall of Mubarak’s regime, which was beneficial to more than one political player in the scene, there were two main “unmentionables” that needed to be eliminated from the equation. This is not a coup, and it’s not an Islamic revolution. There had to be a figure to reward/blame who was not an actual body with any actual ambition. Anybody between the age of 16 and 40 who expressed support for the revolution were called “revolutionary youth.” There were subtle implications of recklessness and lack of both vision and organization.

Democracy, public participation, critical masses, coexistence and political balance maps. Strange expressions of this type were being heard for the first time by a lot of people. Many felt they were foreign and alien, even just the way these words sounded. A tough reaction was taken toward mumbling of this sort.

When Egypt was being ruled by a bunch of old army generals calling themselves SCAF, a lot of unfortunate events happened in the streets of Cairo and elsewhere. Violence between demonstrators and police had become too mainstream, so demonstrators and demonstrators decided to fight each other. The residents of a specific area would sometimes rise up to throw stones at demonstrators chanting anti-SCAF chants. Since then, people showing unconditional support toward the authorities have been called honorable citizens. Other expressions, suggesting that such people work in the sex industry, have also been used.

If you can’t convince a person why revolution is a good thing, you can just call him a member of the couch party. He will not like you more, but it will spare you finding difficult answers to his and maybe your own taboo questions, like: Why is the revolutionary act so holy? What is martyrship? Is revolution good because it’s a revolution, or because of the way it changes things? … etc.

June 30, 2012 Mohamed Morsi, head of the Freedom and Justice Party and the Muslim Brotherhood candidate, wins the presidential elections.

For a lot of Egyptian revolutionaries and intellectuals, bringing the Muslim Brotherhood to power — even though it might turn out to be a threat to their own lifestyles and personal values — was a better choice than voting for Ahmad Shafiq, Mubarak’s last prime minister and the strong face of the old regime’s ambitions. In Egypt, squeezing the proverbial lime on yourself is what you do when you force yourself into a choice you hate. It’s an act of weakness by a group of people who don’t have many choices.

The values behind which choosing Morsi was being justified needed to be completely eliminated. Voices going on about things like “the necessity of respecting the people’s choice” and similar (soft) opinions needed to be discredited as quickly as possible. Certain other players did not want such pressures bringing into question the legitimacy of their plans.

The euphoria of January 25 is almost dying, and it’s quite difficult to justify going out onto the streets. The elephant in the room is finally spoken about: you brought this shit to the country and it’s time for you to shut up, forever. Any solidarity with physical presence on the ground, any alignment with pure revolutionary values in contrast to real practical political gains, will be called “glue sniffing.” And you will be preserved by society as a “glue sniffer,” like the homeless children who live on downtown Cairo streets and sniff glue to get high, a lot of whom were killed during revolution by police. This specific label — after June 30, 2013 to increase further in importance — with its obvious classist insensitivity and cruelty is very reflective of the reactionary nature of the majority who benefited from the system. Waiting for the economy, security and general morale to be bad enough for your argument to shine is such a capitalist technique.

With a deliberately cartoonish impersonation of a fake posh accent, you can call any individual talking about democracy a “freelance activist.” This label contrives to associate these values with corruption, bad intentions and alien-ness from Egyptian society. Now the aggression against these democratic opinions is aimed toward socially isolating them and whipping up the hatred of the general public.

The Brotherhood are famous for being very organized. The have a very tight hierarchy and leadership protocols. A lot of young people among the Brotherhood have been called “sheep” for following assignments they have from above without personal critical thinking. I don’t know how people using terms like these thought they would help the Brotherhood youth like them more, but what I know for sure is that it didn’t create a very friendly environment.

A lot of voices among the Islamist project really, really hate Christians, they also think that any harm to the political Islam project is nothing but a Christian effort to destroy Islam. A lot of journalists or public voices who were critical of the Brotherhood’s performance have been called the dogs of Tawadros (the pope) because they have probably been pet by him to bark at the Muslims.

After a year of failure, Morsi, whose presence in the presidential palace seems to be a source of pain for lots of Egyptians and a very good source of political satire material for Bassem Youssef, is given a warning by the military. He retreats not, and the military says it has to respond to the popular demands to get rid of him.

The word used for “lickers” is such sophisticated classic Arabic. Even though it’s meant to spread among people as if it’s organic, there is an Islamist flavor in it that you can sense, maybe because it sounds like it was formulated in the 1940s. Even if the Muslim Brotherhood are not behind it, you will very much likely be accused of being a Brotherhood member if you use it. Because very few people are able to understand that being critical of the military could be practiced without benefiting the Brotherhood.

The more grandiloquent version of the term “sissies” — how ironic — was manufactured by intellectuals who aligned themselves with the military to describe the intellectuals who didn’t. It is used usually in conversations in which people are talking about the gravity of using excessive force against demonstrators, or random arrests. The term, sunk in misogyny, is quite reflective of the failed state of Egyptian intellectualism right now. The failure that Egyptian intellectuals sensed in all their attempts to communicate with the masses of Egyptians, either through democratic battles for political participation, through media appearances, or through trying to have any real impact on the culture.

AD
You Might Have Missed
Where do old lesbians go to die?
Carbon Colonies & A Green New Deal
What we talk about when we talk about trees
Mugamma revisited: Reimagining the building and the square
AD
Andeel  @_andeel_
280 articles on Mada

Topics
Related
2014 presidential elections
Songs for voting to
Andeel | Exploring the murky world of Egypt's propagandist pop music.
Andeel
Profile of Andeel: Cartoonist, autodidact, funny man
Jahd Khalil | A friend once told me that laughter is a very basic expression of understanding. This makes sense to
Adel Imam
Censoring the ship out of it
Andeel | Andeel on what the film censors missed - with a particular focus on Terrorism and Kebab and other films