Bassem Youssef to return on Friday
By
Mada Masr 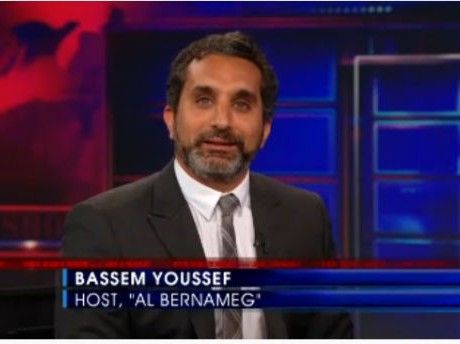 The satellite broadcasting company MBC announced on Saturday that satirist Bassem Youssef would resume his show next Friday on MBC Misr channel.

This will be Youssef’s first show after CBC banned the second episode of his third season in late October 2013.

Youssef mocked former President Morsi and made fun of the public idolization of the military and its commander in chief, Abdel Fattah al-Sisi. However, he stopped short of mocking Sisi himself.

CBC issued a statement following the airing of the episode, distancing itself from it. The channel’s administration said that it had detected the people’s rejection of some of the content of the episode, asserting that it rejects “innuendos or mocking the people’s feelings or state symbols.”

Only minutes before the second episode was due to air on November 1, CBC issued another statement, read by Khairy Ramadan, who was hosting the show airing before Youssef’s, declaring that the show would not air. The channel justified its decision to ban the episode by stating that its content was “in violation of what had been agreed upon,” and that the producers and presenters “insist on going against CBC’s editorial policy.”

The show’s producers terminated their contract with CBC in November, calling the channels’ reasons to suspend the episode “excuses,” and accusing the channel of trying to pressure the show’s team and impose limitations on its content.

After being picked up from YouTube, Youssef’s show started airing on ONtv and moved to CBC in November 2012.

Despite its recent objections, CBC condoned Youssef’s trademark innuendos and harsh mocking of former President Mohamed Morsi and the Muslim Brotherhood when they were in power.

In a television interview with Amr al-Leithy, which aired Saturday night on Al-Hayat, Youssef complained about the double standards of people who accepted his approach when they agreed with him and are now criticizing that very same approach.

When asked whether he will criticize Sisi when his show resumes next Friday, Youssef stated that satire is not all about confrontation.

“I could make fun of the fact that I can’t mention him, that in itself is satire, or I can make fun of how people call anyone who disagrees with them a traitor, that is also satire,” he said.

Youssef also had a message to the judiciary, which he says has not so far mobilized any of the complaints submitted against him.

“I want to tell the judiciary that prosecuting cases against a satirical show will reflect badly on the judiciary itself and on the country, there are far more important things to be prosecuted at this time” he said.

Unsure of whether he will have to pack and move to another channel again, Youssef said that he would stay with MBC “as long as they put up with me.”

The promo for the show references Youssef’s frequent hopping between channels, depicting him loaded in a pick-up truck, wrapped in bubble wrap, and dumped on the side road at a sign bearing the name of the channel that will host him for now.