It’s hard to recall a more formulaic example of mainstream movie-making than 1997’s Saeedi fel Gamaa al-Amrikeya (Upper Egyptian in the American University in Cairo): a cheery montage of lazily racist fish-out-of-water jokes that made an overnight star of Mohamed Heneidy and set the tone for an intensely depressing decade in Egyptian cinema.

Harder still is reconciling that Happy Meal of a movie with the first attempt at feature filmmaking by its director, Said Hamed: the cynical, surreal and absolutely insane Love in the Refrigerator (Al-Hub fi al-Talega)

Released in 1993, Love in the Refrigerator failed to connect with audiences, which isn’t surprising for a film that starts with a verse asking viewers to “bear witness to some nerve-shredding ridiculousness.” It is, however, a shame, especially since said “ridiculousness” is little more than a slightly warped rendering of the day-to-day problems suffered by the vast majority of the population.

In fact, Love in the Refrigerator can be summed up by one early scene wherein the protagonist proposes that his employer refrain from giving him a monthly salary in exchange for keeping him fed, wed, with clothes on his back and a roof over his head, to which his employer replies, “Sure, but I’ll dress you in straw, feed you pebbles, marry you to an ape and house you in a junkyard,” all of which the naïve Mahdy happily agrees to, until he hears the often-repeated promise “wait until the year 2000.”

Like its protagonist, Love in the Refrigerator is a movie that looks to the future, if only out of sheer desperation, but it’s a future springing entirely from empty promises and meaningless slogans, and endless government schemes to benefit off the backs of its citizens. It scorns the foretold cities and industries through a mutated eye resulting from the toxic waste it knows they will emanate, and it is through that mutated eye that the events of the movie unfold and become increasingly distorted, starting once Mahdy, at a loss and under the misguided advice of “Americans never lie,” decides to improvise his own cryogenic chamber and freeze himself until the “Year 2000.”

However, the year 2000 might as well be one million — AD or BC — for how distant it seems, and Mahdy’s stint in his supermarket refrigerator becomes an odyssey through his own deteriorating sanity, featuring a supporting cast that includes a giant break-dancing rooster who at one point urges Mahdy to eat its heart, and Hollywood’s most famous alien, who appears here as a group of clones.

It’s not nonsensical; the interruptions and unwanted visitors to his fridge are all reminders of his miserable social status outside of it, dancing rooster included, and furthermore, they’re all symptoms of common societal hypocrisies. As the film progresses, the fridge becomes less of a self-preservation device than a communal confession booth, and events quickly spiral beyond the confines of its shifting walls.

Besides its storyline, and the fact that it’s a rare science fiction film, Love in the Refrigerator stands out from most Egyptian cinema by its energy alone. It’s a howling stray dog of a movie, full of quirks and eccentricities that make it always interesting to watch, even when it’s busy chewing on its own tail.

The film benefits from a visual style that’s probably close to what you’d get if you threw the work of Terry Gilliam and Youssef Chahine in a trash compactor, the low-grade production design cheap and cheesy enough to come off as disturbing, and essentially dream-like. But it’s hard to imagine any of it working with another actor in the lead role.

With Mahdy, Yehia al-Fakharany plays a character that is not only easy to sympathize with, but, more importantly, likeable. What could have been a bland depiction of the Egyptian ‘everyman’ or, thinking in more recent terms, a walking collection of crowd-pleasing one-liners and catchphrases, becomes instead a man whose quest you wish will end well, even though you both know it probably won’t.

Fakharany guides his Mahdy with childlike optimism that finally starts to wither in the face of obstacles constantly thrown in his path, and enough charisma to carry the film through its weaker moments. Even his war cry, when the time comes for it, is a perfect reflection of his character — determined but weak and, given the circumstances, more than a little absurd.

Love in the Refrigerator is a statement of defeat, so it’s appropriate that the film only spent three days in movie theaters before being declared a box-office failure and pulled. After spending years distancing himself from it and working his way back up through the ranks of television, its director Hamed has since gone on to another life, one of box office record-breakers starring Heneidy, who also makes an early appearance in Love in the Refrigerator, as a corpse.

While it’s somewhat ironic that the two ended up having a significant impact on Egyptian cinema by making the exact type of box-checking crowd-pleasers which they originally set out to parody, there’s always the hope that Love in the Refrigerator (nice short excerpt here if you are not up for watching the whole unsubtitled movie linked to above) will one day receive the attention it deserves. In the year 2000, maybe. 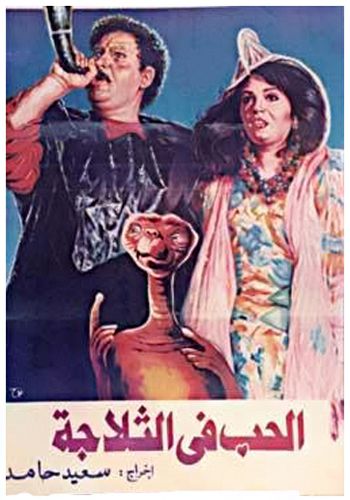 AD
You Might Have Missed
Where do old lesbians go to die?
Mugamma revisited: Reimagining the building and the square
Carbon Colonies & A Green New Deal
What we talk about when we talk about trees
AD
Ali Abdel Mohsen
9 articles on Mada