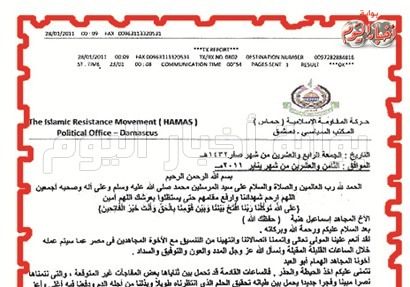 According to Al-Akhbar, the document reveals the Muslim Brotherhood International Organization’s plan, in cooperation with Hamas and fugitive Brotherhood leader Mahmoud Ezzat, to repeat the events of the “Friday of Anger.”

The leaked document also mentioned that the task of leading the militant group was given to Ahmed al-Jabari and his assistant, Kamis Abu al-Nour.

However, Al-Akhbar failed to mention that Jabari, who was the second-in-command in the military wing of Hamas, was assassinated on November 2012 by the Israeli military during a rocket attack on Gaza.

News of the document stirred a wave of anger among twitter users, who called the piece “scandalous” and “ignorant.” Al Jazeera journalist Ahmed Mansour tweeted, “Sisi’s media scandal says martyr Ahmed al-Jabari is leading Hamas’ plan to destroy Egypt,” while another Twitter user by the name “@YSharqawi” sarcastically tweeted that “Martyr Ahmed al-Jabari is running a secret operation from his grave.”

The document also mentioned “a scheme to destroy Egypt using the elite battalions ‘Hawks’ and ‘Ajarema’ in coordination with sympathizers inside Egypt from the Muslim Brotherhood and other militant groups” in Sinai in anticipation of “the hour of salvation,” while providing them with supplies and weapons that would last them five days.

Earlier on Tuesday, Cairo Criminal Court ended the hearing of 132 defendants, including former president Mohamed Morsi, several other Brotherhood members, and some who reportedly belong to the Palestinian Hamas organization. The defendants are accused of storming 11 prisons, attacking police stations, and kidnapping and killing policemen during the January 25 revolution.

Hamas’ leadership has strongly denied the aforementioned accusations. A Hamas spokesperson said in a press statement published late December 2013 that the names of Palestinian defendants listed in the case are fake, as some are prisoners in Israeli jails, while others are martyrs.