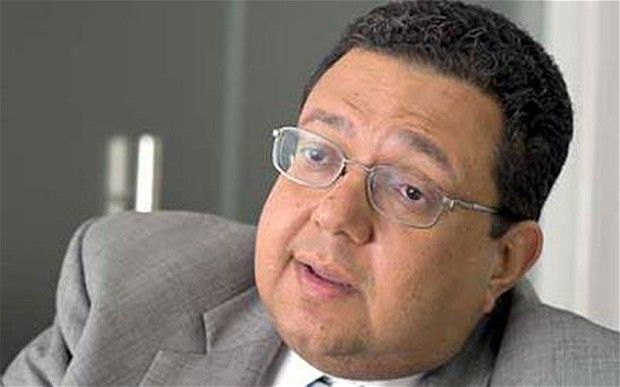 Ziad Bahaa Eddin, deputy prime minister and minister of international cooperation, confirmed to Mada Masr on Monday that he was resigning from his position as reports of a looming wider Cabinet shuffle circulated in the media.

In a statement published on his official Facebook page, Bahaa Eddin declared his resignation from the interim Cabinet, which was appointed in July after the army removed former President Mohamed Morsi following mass protests against him.

“My role in the coming period would be more consistent and effective in the political, partisan and legal sphere,” Bahaa Eddin said in his statement, adding that an “essential phase in the roadmap has almost ended.”

The news came at the same time that Defense Minister Abdel Fattah al-Sisi was promoted to Field Marshal by a decree from interim President Adly Mansour. Many perceived the move as one of many indications that Sisi plans to nominate himself for president, and just hours later, the Supreme Council of the Armed Forces said it delegated him to bid for the nation’s top post.

In his letter, Bahaa Eddin said that the Constitution’s approval in mid-January’s referendum with “a definitive majority” of the nation’s voters formed “a foundation for a new legitimacy.”

He also pointed to the progress being made by the Cabinet in implementing the program for economic development and social justice that was announced on September 12.

Referring to this critical phase of the roadmap, the minister said it was a time when “it was vital to unify the ranks and overcome all conflicts so the country could get past the state of constitutional and economic chaos created by the policies of the former regime.”

As a new phase begins with the country preparing for consecutive elections and completing the roadmap, Bahaa Eddin said that “I request that you accept my resignation … upon your return from the Davos [World Economic] forum and completion of the January 25 commemorations, and as the roadmap becomes clearer.”

A veteran economist with a legal background, Bahaa Eddin was a member of the country’s first post-Mubarak parliament as a representative of the Social Democratic Party, of which he is a founding member. He has written extensively over the past two years about the economic challenges Egypt is facing, social justice and inclusive economic policies.

Bahaa Eddin held office under Mubarak as chairman of the General Authority for Investment, and then headed up the financial supervisory authority before resigning from his post with the outbreak of the January 2011 uprising. In February that year, he was tasked with forming a committee to draw up legislation to prevent conflict of interests between officials and the state. Bahaa Eddin is now the director of the Egyptian Initiative for the Prevention of Corruption.

The Cabinet was hailed for including members coming from what were seen as more revolutionary groups. Prime Minister Hazem al-Beblawi also hailed from the Social Democratic Party, and Manpower Minister Kamal Abu Eita is a long-time dissident labor leader.

For a short while, Mohamed ElBaradei served as the vice president for foreign affairs, but he resigned in mid-August after the violent dispersal of the two sit-ins demanding the reinstatement of Morsi that left hundreds dead.

As any talk of reconciliation with the Muslim Brotherhood and Morsi supporters fizzled, and as the crackdown on its leaders intensified, the Cabinet moved to issue the controversial Protest Law, which was rumored to have caused tension inside the Cabinet.

Activists who took to the streets to protest the new law were arrested, and as a result of ensuing events, many prominent figures of the revolution are now in jail.

Sources told the privately owned newspaper Al-Masry Al-Youm that an argument over the Protest Law took place between Bahaa Eddin and Interior Minister Mohamed Ibrahim, with the former contesting the bill. Ibrahim had reportedly argued that it was a much-needed instrument given the protests his ministry has to deal with and the hazards they are exposed to.

Bahaa Eddin had said that passing the law would hurt the interim government and the roadmap.

Topics
Related
2014 presidential elections
Update: Sisi thanks SCAF for allowing him to respond to the call of duty
The Supreme Council of the Armed Forces (SCAF) has empowered Defense Minister Abdel Fattah al-Sisi to
Mohamed Ibrahim
Protest law causes disagreement within Cabinet
A draft law organizing protests is still causing disagreements, even within the Cabinet
Hazem al-Beblawi
PM appoints roadmap committee
Prime Minister Hazem al-Beblawi announced the formation of a committee tasked with following up
Mohamed ElBaradei
And the nominees are…
The interim presidency has nominated reform leader Mohamed ElBaradei for vice president and economist