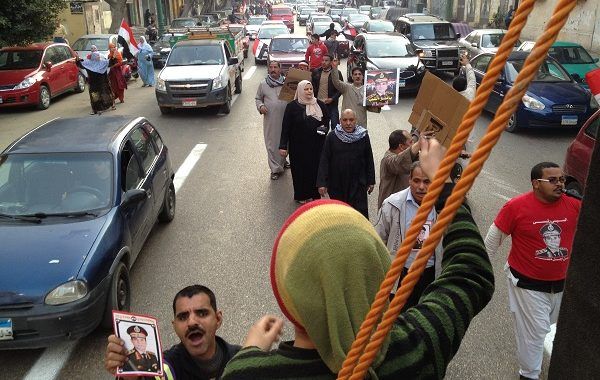 The cab that took me to downtown Cairo on Saturday had a torso-sized Egyptian flag rising from the middle of its hood. I asked the driver if he wasn’t worried about not being able to see the road, but he waved me off with a laugh and explained, “It’s only for today.”

There wasn’t much traffic. Going down the Corniche, I saw the first formations of families gathering on the corners of streets leading back into Old Cairo to hold sidewalk celebrations, as they have on numerous occasions in the past three years.

At the co-op gas station, two pickup trucks were filling up, their truck beds holding stacked amplifiers covered with posters of Armed Forces Commander-in-Chief Abdel Fattah al-Sisi. They kept the music blasting during their pit stop; several of them clapped along and one man was even dancing around the parked truck. I wondered about the type of day they were about to have.

A crowd had gathered at the Journalists Syndicate, and amidst the calls for familiar demands, and the chants against Sisi and his mother, were murmurs about how the protest at Mostafa Mahmoud in Mohandiseen had just been dispersed, and of activists that had been arrested.

Traffic had slowed due to the crowd and I watched as cars crawled down the street, honking their horns at the sight of Egyptian flags and the sound of chanting — and then often growing silent at the realization that the chants were directed against the army and Sisi.

One elderly father’s reaction was particularly memorable, going from patriotic euphoria to a flustered gasp of, “But how?” in the span of one fist pump.

I walked around the crowd briefly, not really talking to anyone, mainly to get a better look at the murals I hadn’t seen before on the walls of the syndicate, of Huseiny Abou Deif and Tamer Abdel Raouf and Ahmed Mohamed Mahmoud. I met up with Leyla Doss and we heard from an activist who had been in Mohandiseen about how the Mostafa Mahmoud protest had been broken up, how he was threatened and insulted by undercover officers who told him they knew who he was, and how they made him climb through barbed wire as they chased him away.

Leyla and I headed towards Tahrir, talking, and I told her how for the past two years, I’ve been feeling nothing so much as an urge to distance myself from events, to the point where I no longer feel I can relate to any of them. She said it bothered her as well.

Minutes later she got the news that the crowd at the Journalists Syndicate had been dispersed, that the activists we had talked to had found it necessary to carry Sisi posters in order to get out safely.

We walked around the square and I took a few pictures of some silly things: Spongebob, of course, but also stuffed tigers dressed in military propaganda, children in camouflage outfits, a bride and groom escorted by men carrying massive portraits of Sisi and the minister of interior, a mother and daughter solemnly holding up a sign to remind all present that January 25 was, first and foremost, “Egypti[a]n Police Day.”

Halfway home, there was a small crowd gathered around a Sisi truck and, after watching the men dancing for a while, interrupting the trickle of traffic that came through the intersection, I asked if I could join them. In high spirits, they asked where I was from, if I knew their neighborhood; and I told them I did and that I had narrowly escaped a beating there two weeks ago when a woman had started yelling about my beard, which they thought was hilarious.

“Those fucking women,” they laughed before commending me for having shaved.

Shortly after we started moving, the majority of the men trailing behind the truck, drowned out by its sound. I asked Amir, who was at the sound mixer, who had paid for all this.

“Paid for what,” he laughed. “We’re not distributing anything. We have three posters that we took from the street, and the truck is Sameh’s,” he gestured down towards the cabin, “and the equipment is mine and Kahrata’s.”

“We’re just out to celebrate,” he said.

I wasn’t too convinced so I turned to Mohamed Abou Rahma (Kahrata), who had been bellowing non-stop into his microphone long before the truck had started moving. Between cries of “No to terrorism” and “Yes to Sisi,” he repeated Amir’s claims, and when I asked him what he did for a living he said he’d worked in everything, but most recently had been a satellite and decoder salesman.

Looking at him, I suddenly realized that, aside from his bright red “Sisi is my President” t-shirt, he was in his underpants. I later found out he had forgotten his galabeya “in the marketplace.”

“I’d like to buy a tuk-tuk,” he said, “and rent it out, god willing.” And with that, he turned back to the microphone, like he had suddenly realized all the buildings he was passing by.

“Come down!” he shouted at the windows. “Don’t be scared, there’s no more terrorism!”

Whether reassured by the claims or just drawn to the commotion, a crowd began to form; but we had barely made it down Qasr al-Aini when the music suddenly stopped. The first, almost immediate reaction came from a woman with a child, both of whom I was surprised to suddenly see by my side of the truck, who said: “Play ‘Tislam al-Ayady‘.”

The response was, “The generator’s dead, mother,” and it was repeated often over the following few minutes.

In the brief time we spent parked in Sayeda Aisha replacing the generator, another crowd formed around the truck; but other than the requests for “Tislam al-Ayady,” the main sound it made was that of children singing different pro-Sisi songs, more than I knew existed. Frequently, cars would pass us by, honking and with peace hands waving from the windows.

The new generator was a cause for celebration in itself, and Kahrata enthusiastically resumed his duties as we speed down a stretch of highway and Sameh weaved the truck across it, catching motorcycles in its orbit and they’d start swerving too, flags trailing in the wind.

He slowed down when we returned to Qasr al-Aini to allow a crowd to form, and it quickly did.

“The decision isn’t yours, Sisi, the people have made it for you,” Kahrata called out, and the people around the truck responded and their numbers grew, some asking for a turn at the microphone, and the surrounding cars blasted their horns in approval and I felt overwhelmed and had a hard time understanding the anti-police graffiti on the adjacent walls, or imagining the gunshots that I knew were, at this moment, being heard in other parts of the city, or believing that on maps, this was still one country.

I thought of the few people I know who have been imprisoned in the past months, and still are, and the countless ones who names I don’t know and never will; how distant they seemed to this scene, how foreign, and of what cause could be worth going to jail for in a country with no jails.

I tried to imagine what it must feel like, right now, to be in those cells, and immediately felt nauseous. I thought of the protestors who had gotten away this morning under the protection of some Sisi posters.

And Kahrata, as we had passed by the Rose al-Youssef building on Qasr al-Aini, whether he realized it or not, chose that moment to declare, “This is freedom!”

The truck ran out of gas just before it reached Tahrir Square, a few feet from where I had been briefly arrested three years ago, and I watched as the scene turned into a dance party to the beat of a song that I’m assuming is called, “We love you, Sisi.”

Eventually, my camera landed on a young veiled woman standing casually next to a framed photo of Sisi, not much smaller than her. She realized she was being filmed and, after a few awkward glances, held the portrait up high and stared straight into the camera with a look that’s become familiar over the past few years, the face that says, “Is this right? Am I doing it properly?”

So I left without saying goodbye, climbed off the truck and took a picture of a guy who asked me to, and walked away to the sound of Kahrata screaming:

“Yes to Sisi! No to terrorism! Does anybody know where we can get some gasoline?”

AD
You Might Have Missed
Mugamma revisited: Reimagining the building and the square
Carbon Colonies & A Green New Deal
Where do old lesbians go to die?
What we talk about when we talk about trees
AD
Ali Abdel Mohsen
9 articles on Mada