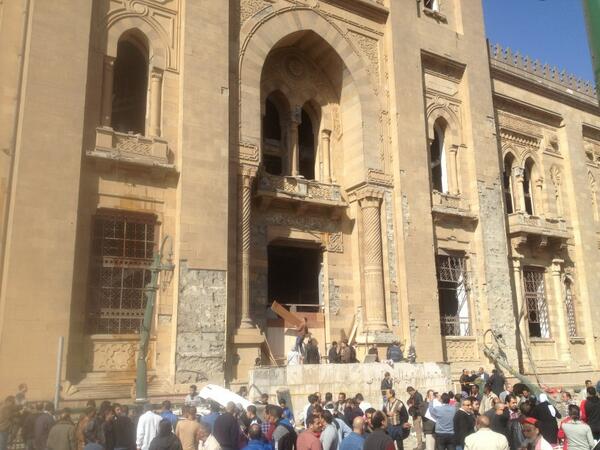 Minister of Antiquities Mohamed Ibrahim and the chairman of the Egyptian National Archives Abdel Nasser Hassan held simultaneous press conferences on Sunday under the same roof to discuss the damages sustained by the Museum of Islamic Art and Egypt’s National Library and Archives (NLA), which were both damaged in the blast targeting the nearby Security Directorate on Friday.

Both museums are situated in the same historic building, however the Museum of Islamic Art falls under the Antiquities Ministry while the NLA is under the jurisdiction of the Culture Ministry.

The Minister of Antiquities Mohamed Ibrahim announced during the press conference that UNESCO would send a team this week to assess the damage and determine the amount needed for renovations.

Ibrahim stated on Saturday, according to state-run daily newspaper Al-Ahram, that UNESCO offered US$100,000 as an immediate contribution towards renovations, in a first step towards launching an international donation campaign for repairs expected to cost $14.2 million.

Ibrahim said on Thursday that the ministry will collect all the pieces that were destroyed Friday and place them in a special section within the museum to attest to the battle against terrorism, privately owned Al-Masry Al-Youm said. He added, “the light of the Egyptian civilization will overpower the hand of terrorism and any attempts to obliterate the country’s identity.”

Hassan complained during his press conference that UNESCO had only offered aid to the Islamic Art Museum, ignoring the NLA. He added that the National Archives would start an international donation campaign to renovate the building, estimating the repairs to cost LE50 million.

The Minister of Antiquities had announced shortly after the blast that the 110-year-old building was almost completely destroyed and would need to be rebuilt.

Topics
Related
Cairo bombings
Condemnation, blame after Cairo bombings
Local and international groups and figures condemned the three bombings that shook Cairo early Friday,
Abdeen
Update: Fourth blast reported in Haram
At least one person is dead after an explosion outside the Radoubis Cinema in the Haram area of Giza