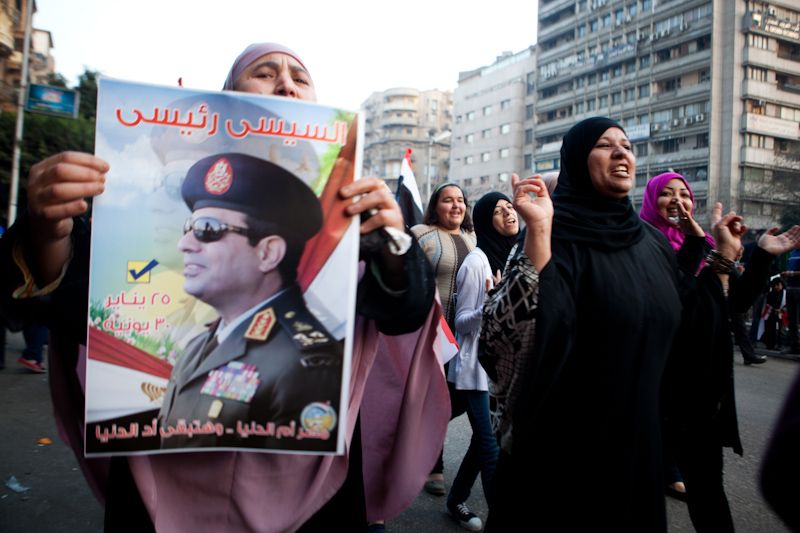 Calls for the man of the hour to run for president marked the commemoration of the January 25 anniversary in Cairo and elsewhere.

Large banners with Sisi’s picture were set up next to stages blasting popular pro-army song, “Teslam al-Ayadi,” around the presidential palace.

MENA boasted that the main stage was equipped with 30 amplifiers and 28 spotlights and that the festivities were being filmed by two camera cranes.

Police and Armed Forces cordoned off the area, securing the entrances with checkpoints where they searched those joining the celebrations while marches calling for Sisi’s candidacy arrived at Ettehadiya.

Later in the day singer Ihab Tawfik took to the stage, giving an impassioned speech about defeating fear and continuing celebrations and pleading with Sisi to become president through song.

In downtown’s Tahrir Square and Abbasseya the mood was also celebratory, with protesters holding up posters of Sisi and Interior Minister Mohamed Ibrahim while dancing to the pro-military song.

Other governorates also used the anniversary as an opportunity to reiterate calls for the defense minister to announce his candidacy.

In Alexandria, huge posters showed a picture of Sisi amidst rulers of Arab countries that support the current military-backed government. Slogans surrounding the posters called for Arab unity.