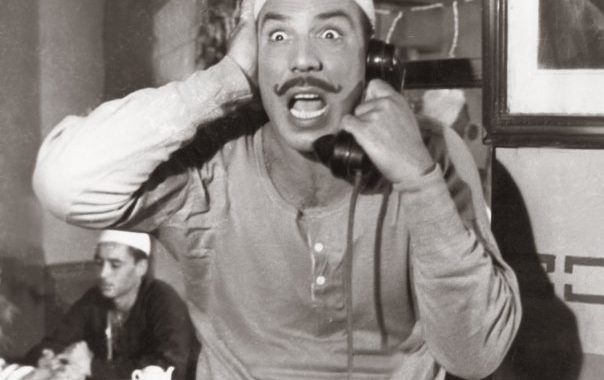 This is the kind of movie that you grew up watching.  Salah Abu Seif’s The Tough (Al-Fattawa) was always a preferred choice for whoever’s in charge of what’s shown on Egyptian TV.

Watching this movie in 2014, ripped onto a cheap DVD with the name El-Sobky Film Productions stuck on it, has a certain irony. A movie made in the 1950s with an obvious socialist agenda, focusing on a fight over power and wealth between two rival vegetable merchants, is now owned by an ex-butcher who took over the cinema industry and totally commercialized it to an amazing level of decadence. (See last week’s cinematic gem.)

The Tough itself is not that far from being a commercial movie with blockbuster potential. The lead character is played by “monster of the screen” and “king of terrace seats” Farid Shawky himself. Shawky was one of the earliest Egyptian actors to do their own stunts, at a time when stunts were things like receiving real face slaps and throwing live donkeys at each other. Yet the movie was armed with an intellectual weight that gave its commercial success respectability. It has a script crafted by two big-time scriptwriters of the era, Mahmoud Sobhy and Sayyed Bideer, alongside Nobel prize-winning novelist Naguib Mahfouz and Abu Seif himself.

The movie starts with a short note stating that the events it follows occurred at a time when people’s lives and earnings were being controlled by a few evil beneficiaries. It’s an obvious announcement of the movie’s pro-1952 revolution stance and of the way the revolution was trying to change the way things worked. The movie is strongly connected to the revolution and the debates it stirred up. The symbolism is very clear and sometimes quite blunt. King Farouk is always an important part of the events: his corruption reaches and pollutes everybody, even our hero/anti-hero, and his picture hangs on the walls. In the climactic fight scene near the end, one such picture is hit by tomatoes.

Hareedy, a nobody brought to Cairo by a boat on the Nile, arrives with as much knowledge — and strength — as a donkey, and nothing else but his famous Upper Egyptian dignity and pride. Which will then be the first thing he loses for the sake of making more and more cash and enemies.

With its many biblical references, the story has a very unique mystical flavor. The hero is going to infiltrate the villain’s throne by submitting himself as a loyal servant and guardian, only to totally destroy him from the inside out in a very Moses-vs-pharaoh type of story. Alliances, greed, envy and betrayal draw the outlines of the characters’ desires and circumstances. The hero you side with as the movie develops will later completely lose all his values and fall into even worse villainhood than his rival. I was very satisfied that he didn’t redeem himself at the end. The movie’s finale is a very pessimistic one: two guest stars (Mahmoud al-Miligy and Huda Sultan) re-enact the scene with which the whole story began, after a police officer says an epic line about how the fight will always go on, regardless of who’s fighting.

It’s a typical from-zero-to-hero plot, the kind that has been a constant source of inspiration to filmmakers since they realized that people like watching other people do what they can’t do in real life on the big screen. Thinking they were going to change the world or at least the way people saw it, Abu Seif made The Tough in 1957 not knowing that 50 years later Martin Scorsese would still be telling the same story with The Wolf of Wall Street (2013) because people still seem to see things the same way.

Stuck in the ignorance and poverty and injustice surrounding everybody’s lives, The Tough tries to deliver its message with as much honesty as possible, honesty always being Abu Seif’s favorite route. He has a giant legacy of movies that always take the side of the poor and unfortunate, of sticking his camera in the most awkward of locations and surrounding it with dirt and rubbish and tortured faces. With movies like A Woman’s Youth (1956), Between Heaven and Earth (1959) and The Second Wife (1967), Abu Seif paved a way for a generation of Egyptian filmmakers who formed in the neo-realism movement of the 1980s.

It’s true that Abu Seif’s movies have long been criticized for being preachy and moralistic. But they come out favorably in comparison to most films being made at that time, when cinema was being used — in a very straightforward way — to either promote a specific, very nationalistic Nasserist agenda to convince people that their lives were getting much, much better very quickly, or just convince people that nothing about the pre-revolution reality was any good. Then there were the movies that were just really, really bad.

The scriptwriters of The Tough get themselves and the movie’s characters tangled up in very complicated ethical conversations as they try to justify the acts with which they commit treason and corruption for the sake of good, or at least their own understanding of good. At first I thought the movie was attempting to symbolize the story of revolution. The scenes of the merchants meeting in basements and swearing on the holy book to be faithful to each other were very reminiscent of scenes of the Free Officers’ meetings before the 1952 revolution/coup. But then the story ends with everybody almost as guilty as each other, so there’s no way they were conjuring up the Free Officers — because everybody knows they were innocent, right?

I know it might not be very professional, but I can’t write about this movie without mentioning Tahiya Karioka. It’s very difficult not to be personal when you are explaining to readers the importance of the role played by your childhood crush. She plays Hosneya, the tough woman who survives the deadly Cairo fruit and vegetable market on her own after her husband’s death, armed with a fierceness and wild charm that is actually magical. And it’s not just me. Her performance when she first encounters Hareedy, when she gives him a lesson on how to stand up for himself and fight back, is a mixture of angry motherly guidance and sexy companionable tease.

You will sometimes feel like the movie is rooting for this woman who is co-running things and carving this log of a man into a real figure, who then follows his own primitive greediness and stupidity away from her. It’s a pretty familiar story.

It must mean something, then, that in the final epic fight in which the climax is being reached, the bad guys’ team taunting the good guys’ team only manages to get them to snap by chanting that at least they don’t have any women on their team.

AD
You Might Have Missed
Where do old lesbians go to die?
What we talk about when we talk about trees
Carbon Colonies & A Green New Deal
Mugamma revisited: Reimagining the building and the square
AD
Andeel  @_andeel_
280 articles on Mada