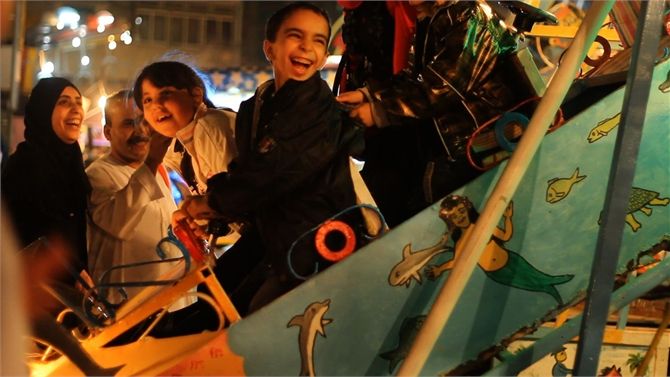 The story is realistic — it’s an obvious scenario, nothing complicated, about a misunderstanding. A young artist is filming children around a fairground in a poor neighborhood in Alexandria and two men working there get suspicious. They take him to an empty ship-building yard for interrogation.

Bahari (2011), just under 13 minutes long, was Alexandrian filmmaker Ahmed Ghoneimy’s second short and was based on a real encounter. He later improvised the experience with one of the real-life protagonists (Yasser El Beltagy), who plays a character in the film.

The way the movie is constructed is strange and gripping. It starts with filming on a rainy night, through a car windscreen with hardworking wipers, some women waiting out the weather in a doorway. We hear a camera’s click and the frame momentarily freezes.

A voiceover tells an anecdote about a shark circling someone; the circled person put his hand on the shark’s nose and it fell asleep. As we cut to fairground scenes — beautiful shots of children laughing on hand-painted rides amid blurry colored lights and the moon — the voiceover, competing with the mythical sound of waves hitting the shore, becomes more threatening, though we don’t yet know what the problem is. A young man in a dark alley seems to be looking for something.

“We just want to know, are you a child molester?” says the voice, eventually.

In a building sits the artist, Amr (Amr Wishahy) — well-fed, smooth skin, bushy hair, slightly sulky demeanor, not seeing the need to explain himself — being questioned by two men with lower-class accents. It’s a tense but minimal interrogation — not much communication seems to happen. Instead, the camera focuses intensely on facial expressions — weird editing makes these long, portrait-like shots more important than the sequence of events or getting any answers. Beltagy’s eyes glisten as he stares at Amr, unable to penetrate his alien demeanor.

“We’re trying to help you,” say the men, cop-like. Why was he filming the children?

“No reason, I just was,” Amr says, and when pushed, “It’s just something I do for myself.”

They say he can go home but Beltagy takes him to another building where coiled ropes hang on the walls; the tension rises. They sit at a desk, silently. Beltagy has a red pen and notebook and he draws something, a goose although we don’t see it, and starts explaining the process of building swings: he takes his drawings to the metalworker who recreates them in parts that can be re-assembled.

“Draw me a goose,” he says suddenly, pushing over the pen and paper.

The reluctant Amr does try eventually, but gives up quickly: “I can’t draw the legs.”

“Try to finish it, do your best,” insists Beltagy.

A brief flashback to an answer we hadn’t seen in the previous interrogation: “I wanted to do something special and different.”

Then there is complete silence. Kids run through the fairground, and on the beach at early dawn or dusk when the colors are bleached and blue-ish. Finally, we return to the sound of waves as the sun rises. Horses are being washed in the sea and the two men and their captive watch the calm and gorgeous scene.

The film is self-aware and broaches awkward topics. First, the contemporary artist’s disconnect from broader society, for various reasons including class. Second, how art about poverty, or art that benefits from the ways things look in poor places, or even just art-making in general, is often exploitative and/or voyeuristic. It almost makes sense in this unequal world that Amr gets into that much trouble for doing something quite normal. But the film isn’t didactic; it has an air of wonderment, uncertainty. And Amr is never really portrayed as innocent.

In the scene where Beltagy suddenly talks about designing swings — talks, essentially, about being an artist and the process of making — it is funny but serious. It flips the situation round and is somewhat absurd, but doesn’t make fun of him. The educated young artist fails to draw a goose and it’s unclear if Beltagy’s encouragement is aggressive or not; indeed it’s generally unclear how things are going to turn out, whether Beltagy’s intense stare is manic or merely frustrated with lack of understanding.

Maybe the two fairground workers adopt an attitude like that of undercover cops because they’re used to being treated that way, while Amr doesn’t respond correctly because he lives in another world. People fall into established patterns of power relations like over-zealous neighborhood patrols did during the revolution. Beltagy thinks he’s a police officer but his accent and outfit aren’t middle-class enough; again, it’s kind of funny but also sinister, revealing, almost sympathetic.

While these nuances are what make the film real and mysterious and interesting, the skillful technique with which it’s made makes it very watchable and puts it well above your average short. It’s shot very well — colorful, sometimes crisp and dramatic, sometimes blurred and atmospheric — and edited deftly and unconventionally. It’s a promising indicator of the rising standards of experimental film in Egypt due to increasing resources, education and competition.

The filmmaking team’s competence is what enabled them to make an arty film that is gripping enough to hold a non-art audience: the pace and the elliptical beginning create a tense drama, and you only figure out what’s going on halfway through the film, by which time you have to find out how it ends.

Bahari was produced by the Alexandria Contemporary Arts Forum and artist Sherif El Azma. It did well on the international festival circuit, winning various awards, and was shown in PhotoCairo 5 last year. Ghoneimy’s third film, The Cave, will be released this year.

AD
You Might Have Missed
What we talk about when we talk about trees
Where do old lesbians go to die?
Mugamma revisited: Reimagining the building and the square
Carbon Colonies & A Green New Deal
AD
Jenifer Evans  @jniferrl
40 articles on Mada