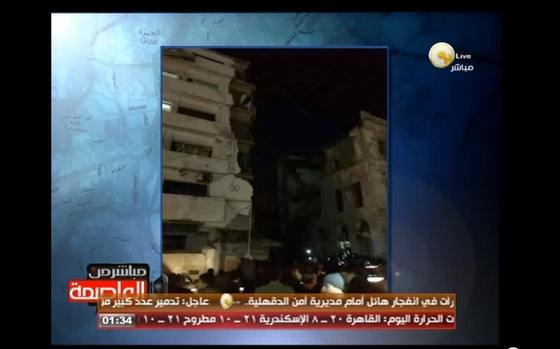 The names of seven suspects in the December bombing of the Daqahlia Security Directorate were released by Interior Minister Mohamed Ibrahim on Thursday.

In a press conference, Ibrahim also released the names of suspects in other attacks allegedly perpetrated by the recently banned Muslim Brotherhood.

The minister accused Brotherhood members and the Sinai-based militant group Ansar Beit al-Maqdes of carrying out the Mansoura bombing.

The suicide bomber who detonated the explosive device, killing 16 and injuring dozens more, was identified as Imam Mahfouz, 40.

Security forces allegedly uncovered a small laboratory for manufacturing bombs in one suspect’s home, according to Ibrahim. They also allegedly confiscated several books authored by Al-Qaeda, an RPG, an automatic rifle and a statement by Ansar Beit al-Maqdes that claimed responsibility for the attack.

Ansar Beit al-Maqdes was allegedly involved in a similar bombing targeting the same security directorate in July, which injured several soldiers and left one dead.

Ibrahim claimed that a group of Brotherhood members confessed to the police that they were involved in shooting anti-Brotherhood protesters before and after the June 30 protests that led to former President Mohamed Morsi’s ouster, with the help of members of the Gaza-based Hamas movement.

The period following the January 25 revolution enabled the Brotherhood to expand its networks with other extremist groups and organizations in order to use them in its “criminal operations,” Ibrahim alleged.

One major channel of communication was opened with Hamas, which gave massive logistical support to the Brotherhood, Ibrahim alleged, accusing the Palestinian resistance group of hosting Brotherhood members at Hamas camps to train them in weapons usage and military technology.

Ansar Beit al-Maqdes was launched out of this cooperation, Ibrahim claimed, adding that the group’s members have been involved in several attacks, including an attempt on his life late this summer, an attack on the Nozha police station, the assassination of National Security officer Mohamed Mabrouk and the latest attack on the Daqahlia Security Directorate.

“The accusations of the Egyptian minister of interior to Hamas of giving logistical assistance to the perpetrators of Mansoura bombing are not true. The accusations are an attempt to mislead the Egyptian people, and exporting the internal Egyptian crisis,” he said.

An unnamed Muslim Brotherhood source also officially denied that there were any ties between Yehia Saad or his father to the organization, Anadolu reported.

Topics
Related
bombings
Mansoura turns on the MB
Mohamed Ezz | In the early hours of Tuesday, December 24, an explosion rocked the city of Mansoura. Shaken out of their