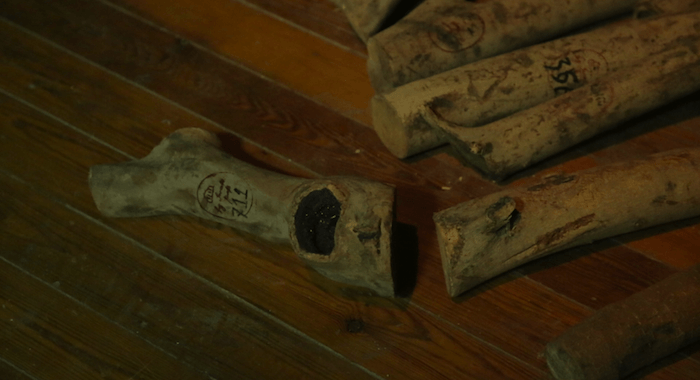 In the early 20th century, about 100,000 members of the Herero and Nama tribes (the natives of present-day Namibia) passed away. But this was not due to a natural disaster. “The Black Holocaust,” as it has come to be known, was the work of colonial forces in German Southwest Africa. It was the first genocide of the century, and is believed to have been an inspiration for Hitler’s later attack on Jews and Roma gypsies. Still, despite the extermination of over 80 percent of the local population by 1908, little is known of the victims — their names have been neither documented nor commemorated. Sudanese-born Cairo-based artist Amado Alfadni is, however, turning this around.

In his “Black Holocaust Museum,” Alfadni re-creates images of the Hereros’ suffering in the minds of audiences. A room hosting his installation at the Contemporary Image Collective in Cairo is filled with 3,000 wooden logs stacked like a pyramid. Each is marked in red with a number to identify the victims of the world’s first extermination camp on Shark Island, and to hopefully set their souls free; traditionally, for a Herero soul to find its eternal home, a sacred fire must be lit by a person sharing the deceased’s last name — a ritual made difficult as the victims were recorded as mere numbers at the camp.

At the “Black Holocaust Museum,” audiences stand in the dark contemplating the logs, while listening to a voiceover by artist Fardus Abdul Rahman describing how eight Herero boys are lined up for a photograph. “They are posed in an arrangement reminiscent of a family portrait,” she tells us. But they wear shackles around their necks, and a few also have numbered oval tags attached to ropes tied around them. Some of the boys look away, while one defiantly stares at the camera.

Eight images are described in such vivid detail that you visualize them while simply staring at the wooden logs. Even in the accompanying publication, in which the narration is printed, the places for the photographs are left blank. On each page there is an empty rectangle outlining where the photo would have been — this somehow has a longer lasting impact. In a way it has the effect of the imaginary yet very personal images one creates while reading a powerful literary work — and what makes it so harrowing is that it is true.

Over the past year, Alfadni collected these fragments of narratives using archival photographs documenting experiments conducted on Herero prisoners in the camp, as well as German soldiers’ memorabilia. His “Black Holocaust Museum” does not try to present an objective reading of this event. Like the three other art projects showing at CIC as part of “References* — Artists Activating the Archive,” it is subjective and sincere; it triggers curiosity about the subject with an option to dig deeper.

“References*” is the brainchild of Egyptian artist Hala Elkoussy and Swiss artist Uriel Orlow — both known for creating fictionalized versions of often overlooked historical incidents in their artwork. In 2012 — with the support of the Swiss Arts Council in Cairo, Prohelvetia — they led a workshop on the potential of research and archival processes for artistic production. Alfadni, Marwa el Shazly, Mariam Elias, Aliaa Salah and Nada Shalaby were then selected from the participants to develop projects that culminated in this exhibition — the only connecting line between the works being their use of archival processes. The resulting artworks are quite varied in topic, approach and form.

Shazly and Elias, for instance — having both studied at the Helwan Faculty of Fine Arts, where Shazly is currently an instructor — explored the lives of life models on campus. Through a documentary film, photographs and a giveaway publication of coursework samples, they reflect on the status of these ‘seasonal workers’, some of whom, like 31-year-old Ghada, are second generation life models at the faculty. The life models come to pose, fully clothed, for painting and sculpture classes and live on a daily wage of LE13 (less than US$2).

Many also keep the nature of their job a secret from their families and neighbors for fear of social stigma. With the spread of conservative interpretations of religion in Egypt in recent decades, figurative art has come to be seen by many as prohibited. The legacy of the Fine Arts Faculty, which hired nude life models until 1970, is disapproved of and gives rise to undesirable rumors around current models, who do not pose nude.

But the portrait Shazly and Elias present of these life models is not one-dimensional. It does not push for a particular position or seek to undermine cultural perceptions. In fact, what makes it so interesting is the humanistic depth it gives to an otherwise silent and overlooked group that only appears in students’ artwork. “Drawing On A Nude Body” gives them voice rather than simply preaching a particular viewpoint.

Nada Shalaby, in her research on the archaeological site of Tel el-Yehudiya in Greater Cairo’s Qalyubia Governorate, has followed a communal but more open-ended approach. Tel el-Yehudiya, a site shrouded in myth, lies on the southeast edge of Shalaby’s hometown, Shibin al-Qanatir. It has been frequented by the local population out of belief that a special basin and column, now removed and put in storage by the Ministry of Antiquities, has the power to make infertile women fertile. The state’s removal of the column was an attempt to curb the practice. But the site has also been frowned upon for its association with Jews — its name directly translates as “Hill of the Jewess.”

The ‘truth’ about the hill, as Shalaby presents it through research and interviews with residents and archeologists, is that it has been home to various civilizations since the 18th century BCE. It is currently only frequented by archeologists, women hoping to bear children, drug addicts, and car-jackers taking advantage of the site’s remoteness and seclusion. It is also a pilgrimage destination for Jews and Israelis every year.

Shalaby seeks to present these many fragments of both myth and reality in her project “You and I and Time is Long,” the title of which is a literal translation of an Egyptian expression meaning “I’ll get you eventually.” She presents news clippings, magazine reports, chapters of academic books, and reproductions of some of the art excavated from the site and currently owned by the British Museum, the Brooklyn Museum, and the Louvre.

In the room hosting Shalaby’s work, these items sit alongside an oral history of the place. It offers a very interesting and thorough portrait, while also raising questions about the writing and appropriation of historical events by both the site’s inhabitants and major institutions such as museums. But the creative side of this particular project seems minimal. It acts more as a research project than an artistic one.

The last project in the exhibition is also relatively weak on the artistic side. Alia Salah takes on Egypt’s maritime borders as her subject. She focuses on the discovery of natural gas reserves in Egyptian waters, and its undermining by delimitation agreements between two neighboring countries, Israel and Cyprus. Shalaby’s research for “Lines in the Sea” digs into statements by scientists and government officials and reproduces them as imaginary newspaper headlines. The audience is left to connect the dots between the otherwise blank newspaper pages.

The project’s aesthetic is very similar to some of Orlow’s work in his collaborative project “There is Nothing Left” with Céline Condorelli, which was hosted by the now-closed Alexandria Contemporary Arts Forum in December 2011. “There is Nothing Left,” explored blind spots in Egypt’s 20th-century history, starting with Alexandria and the Suez Canal. Orlow also used newspaper clippings, but the narratives were so entangled and surreal that this method worked much better, along with sketches, films and documents he co-produced.

On the whole, “References*” should act as an exciting and inspiring exhibition for both audiences and other artists. Very few projects of such depth and focus have been produced over the past few years, as several attempts at making the Egyptian National Archives accessible to the public since January 25, 2011 have failed. It also shows a shift in the practices of the participating artists that is fresh and welcome on the local scene. The topics they tackle have become truly intriguing and accessible to the public, beyond the circle of academics who normally engage with them.

AD
You Might Have Missed
Mugamma revisited: Reimagining the building and the square
What we talk about when we talk about trees
Carbon Colonies & A Green New Deal
Where do old lesbians go to die?
AD
Mai Elwakil
34 articles on Mada

Topics
Related
Alexandria Contemporary Arts Forum (ACAF)
Anxiety is the new self-producing work ethic
Ania Szremski | What does it mean for this kind of post-internet work to be randomly inserted into Cairo’s visual vernacular?
Darb 1718
‘Brain Damage’: A varied and refreshing painting show
Mai Elwakil | 'Brain Damage' emphasizes painting as a living and contemporary medium that can engage the public.
Ahmed Badry
Then, now, and ‘Roznama 2’
Mia Jankowicz | Unless text is truly part of the work, notes like this feel like a conceptual get-out-of-jail-free card