Who will run for president, and when?
By
Mada Masr 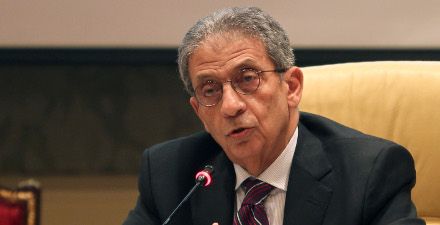 Talk about the different possibilities for presidential election candidates continues in the media today.

Veteran politician and diplomat Amr Moussa remains undecided about running for president, a source close to Moussa told Mada Masr Monday. The source, who asked to remain unnamed, said that Moussa believes that he will not have the support of the military because of his “independent tendencies.”

On Tuesday, privately owned Al-Shorouk newspaper reported on a meeting between Moussa and the American Chamber of Commerce. Moussa was reported to have told chamber guests that General Abdel Fattah al-Sisi enjoys wide public support but could serve the country from a position other than the presidency.

He also said that several of those already named as potential candidates were not ready for the post.

One day earlier, Al-Shorouk ran a story reporting that Moussa was considering running for the post, particularly if Sisi doesn’t stand for office.

Moussa, 77, served as the head of the 50-member committee that amended the 2012 Constitution. He previously headed up the Arab League and, during the Mubarak regime, served as foreign minister.

He previously ran for office in the 2012 elections, finishing in fifth place with about 11% of the vote.

According to the paper, the Social Democratic Party, which is also part of the Front, has announced that it will support the candidate who is most aligned with its economic and social platform. Party leader Mohamed Aboulghar was quoted as saying that Moussa’s leadership of the 50-member committee garnered him a lot of credit and showed that he would be a suitable candidate.

Meanwhile, the Tamarod movement, which supports the military-led interim government, says that its first choice for the presidency is Sisi. If the military leader does not run, Tamarod’s second choice of candidate is Hamdeen Sabbahi, the Nasserite head of the Popular Current movement and Karama Party.

Tamarod was founded over the past summer, and led a campaign to remove former President Mohamed Morsi.

Mahmoud Badr, Tamarod co-founder, said that the group will strongly support Sisi because of his overwhelming popularity. In an interview with the Algerian Al-Fajr newspaper, Badr said Tamarod would only endorse Sabbahi if Sisi doesn’t enter the contest.

He added that Sisi was responsive to the movement’s propositions ahead of Morsi’s ouster. He claimed that Tamarod had convinced Sisi that a referendum on Morsi’s presidency should not be held; that there should not be early presidential elections; and in favor of creating a “road map.”

It is still unclear whether presidential elections will be held before or after parliamentary elections. The decision has been left in the hands of interim President Adly Mansour.

There are conflicting news reports on the matter. Concerns have been voiced that holding parliamentary elections ahead of the presidential run-off could lead to the “hijacking” of elections by Islamist political groups.

The draft constitution, to be voted on in a January referendum, does not specify which of the elections — presidential or parliamentary — should be held first. It only specifies that one of the elections must be held within no more than 90 days of passage of the constitution.

Topics
Related
Sisi for president
Sisi still cagey on question of presidency
In an interview published in the Kuwaiti Al-Anba’ newspaper on Thursday, commander-in-chief of the
2012 Constitution
Amr Moussa heads constitutional committee
Amr Moussa has been elected head of the 50-member committee tasked with amending the 2012 Constitution,