BEIRUT, LEBANON – From a distance, Inaya Hodeib’s “Stories from B Town” (2013) seems like a giant photomontage. It shows the artist’s face, solemn and expressive, juxtaposed with the manga super-robot Grendizer, from the anime series of the same name. “Grendizer” was followed by millions across the Arab world back in the 1980s. But “Stories from B Town” is not a photograph. Once you approach it, you see the artist’s brushstrokes and careful layering of oil paint. The massive (2.70 m x 2.10 m) painting lures you in and you get lost in the minutest details of the self-portrait.

As with most of Hodeib’s work, “Stories from B Town” is a painting about painting. Like US artist Chuck Close, whose early work this painting bears a resemblance to, she makes art that defies the late critic Clement Greenberg’s famous statement from the 1960s about the death of portraiture. Hodeib paints people, dogs and mundane objects, and considers them all portraits since she — successfully —evokes the sincere and relatable character of the person or object in her paintings.

“Stories from B Town” — also the name of the series from which the painting is taken — is Hodeib’s latest work and is currently on show in the Exposure 2013 exhibition at Beirut Art Center. The series is autobiographical, with innocent and fairytale-like childhood memories from the time of the Lebanese civil war. For instance, Hodeib’s father would pump up the volume of the TV whenever “Grendizer” was showing to cover up the sound of bullets in their neighborhood. But references to the civil war in the painting are very subtle, making her approach stand out from the recurring imagery of destruction artists often use while tackling this period.

Some of the other works shown in Exposure 2013 — the annual exhibition that Beirut Art Center devotes to ‘emerging’ artists in and from Lebanon — also deal with the topic, but in very different ways. Exposure is not a show curated around a particular theme — the jury made its selection from 100 applications received in response to an open call. But the long-lasting effects of the war continue to cast their shadow on many of the 14 participating artists.

“Maya” (2013) — a photographic series by Lara Tabet — exhibits some of the more familiar images of suffering, but her intentional destruction of photographs is exciting. Tabet strips away information from existing photographs by reshooting them under bright lights and flash with a low-resolution camera. Her photos seem on the verge of decomposing.

Colombian-born, Paris-based Camila Salame, who is showing her work next to Hodeib’s, uses an entirely different aesthetic to reflect on experiences of displacement brought about by the war. For her sculptural installation, titled “Hypochondria of the Heart” (2013), she made a series of miniature model homes, built from paper, cardboard, fabric and beeswax. Each home is placed in a fantastical and uncanny context: two lie inside tall glass bells on top of long, whirling locks of hair; another is set in a clay pot of Colombian wild grass and suitably titled “In Spite of Time, Planted House”; and in “Sweet Memory, House on Honey,” the house is placed inside a half-full honey jar. Salame turns the idea of a home into a personal, constantly reimagined one that can be carried around with us wherever we go. 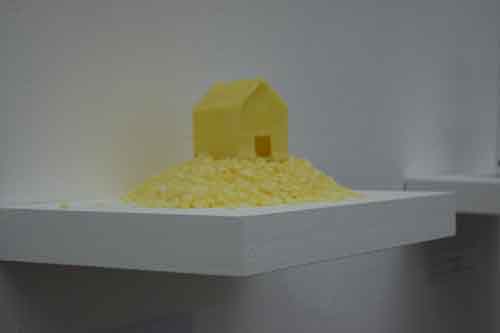 The colorful bullet cartridges artist and anthropologist Pedro Barakat collected during strolls around Beirut are also visually attractive. Barakat, whose parents emigrated to Brazil during the war, attempted to discover his native city on a visit, collecting objects he found and creating lists of his observations. But while his work, “flâneries” (2012), offers a personal encounter with the city, it is also somewhat simplistic and almost touristic in nature, offering little to exhibition visitors. 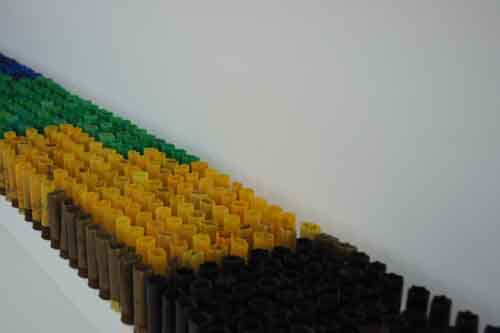 Yasmina Haddad is another artist who was pushed into exile (to Austria) at an early age and is exhibiting in Exposure 2013. She also presents a personal history that touches on that of Beirut. But her photographic and sculptural series, titled “Interni,” is mesmerizing. Different parts of “Interni” are scattered on the ground floor of Beirut Art Center. By the bookshop stands a miniature gold-painted palm tree on a striped pedestal. In another corner is a giant carved wooden pineapple: a table leg from one of interior designer Joseph Haddad’s designs. 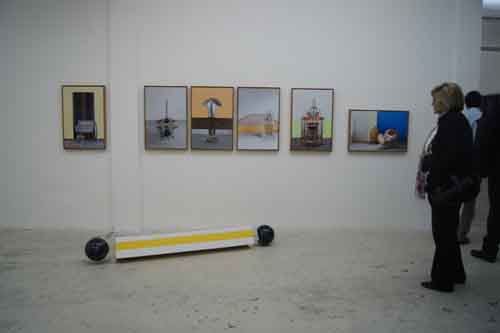 Joseph is the artist’s father. He ran a furniture gallery and design workshop, INTERNI, from the 1970s until 2012, although the family business barely survived the civil war. When it closed in 2012, Haddad returned to her hometown to re-discover its collection. She started by photographing different chairs in black and white. Then she began working with compositions that combined pieces from the shop’s collection, her father’s designs and old cardboard boxes used for storage.

Beirut is home to many galleries that specialize in art deco, and Haddad’s photographic series and sculptures function as a take on the history of these spaces, which are mostly owned by members of the Lebanese middle class. But her work also makes interesting connections to the history of western design and colonialism in the region: shedding light on the introduction of art deco in Lebanon, the rise of this design movement, and its appropriation of motifs from the ‘Orient’, such as Islamic woodwork designs and ancient Egyptian art. Haddad brings more eclectic references into play: the striped pedestals — including one connected to two marble table legs and exhibited in front of the photographs — are inspired both by Daniel Buren’s “Les deux plateaux” (1986), consisting of 450 striped pillars in the courtyard of the Palais-Royal in Paris, and by Louis Vuitton’s spring 2013 collection, Graphic-Chic.

The overlapping theme of war in the above selection is purely coincidental. But given how the civil war has been repeatedly referenced in the work of Lebanese artists over the past two decades, it is refreshing to see the new ways through which artists are currently tackling this period.

There are other artworks in Exposure 2013 that do not deal with the same period in Lebanon’s history but are equally intriguing. Kuwaiti artist Monira Al Qadiri, for instance, deals with the perception of doomsday in her video titled “Behind the Sun” (2013). Artist and musician Wael Kodeih (aka Rayess Bek) uses black humor in his comments on online surveillance and censorship in his piece “Lost and Found.” What Exposure 2013 truly offers is a sense of diversity and renewal within the local Lebanese scene. Many of these artists are exhibiting in Lebanon for the first time, and more importantly, each artist and project is presented in a way that is independent of any overarching theme, allowing the public to interpret the work.

AD
You Might Have Missed
What we talk about when we talk about trees
Carbon Colonies & A Green New Deal
Where do old lesbians go to die?
Mugamma revisited: Reimagining the building and the square
AD
Mai Elwakil
34 articles on Mada

Topics
Related
Alexandria Contemporary Arts Forum (ACAF)
Anxiety is the new self-producing work ethic
Ania Szremski | What does it mean for this kind of post-internet work to be randomly inserted into Cairo’s visual vernacular?
Ahmed Badry
Then, now, and ‘Roznama 2’
Mia Jankowicz | Unless text is truly part of the work, notes like this feel like a conceptual get-out-of-jail-free card
exhibition reviews
Pretty, pretty, pretty, pretty, pretty girls
Ania Szremski | Though the word lazy isn’t really allowed in the art criticism lexicon anymore, frankly that’s what