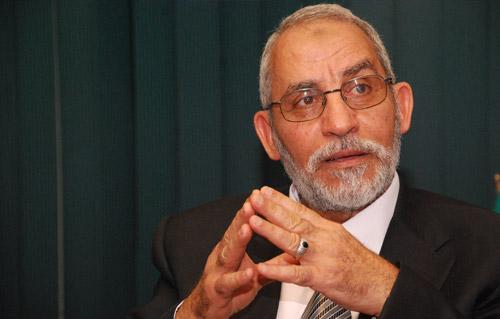 Judges assigned to the case of Muslim Brotherhood leaders at Cairo Criminal Court recused themselves on the basis of disorder in the court and their personal inability to judge the case, state-owned daily Al-Ahram reported on Wednesday.

This is the second time the judges have excused themselves from hearing the case based on prejudice or judgment. The case was previously referred to the Court of Appeals to reassign judges.

The defendants include Muslim Brotherhood former Supreme Guide Mohamed Badie, his deputies Khairat al-Shater and Rashad Bayoumi, and 15 others on charges of incitement to violence and murder in relation to events at the Brotherhood headquarters in Moqattam on June 30, during which 9 were killed and 103 injured.

The session commenced at 10:30 this morning. From the start, a state of hysteria prevailed, with the judge repeatedly asking for calm and the defendants repeating slogans against the court, general prosecution and military rule.

Privately-owned daily Al-Masry Al-Youm reported that Badie declared that victory is coming, while Shater raised chants against the head of the Armed Forces Abdel Fattah al-Sisi.

Badie asserted that Morsi remains the legitimate president of the country, “because he is the only president to come after January 25 through legitimate means and not a coup.”

He criticized Egypt’s current authorities, citing clashes in Ramses in October, which led to the killing of several protesters and night raids on Brotherhood homes. Badie also said that all witnesses in the case are state security officers, claiming the prosecution could not find a single honorable citizen to witness against Brotherhood leaders.

Al-Ahram reports that the unrest started when journalists attending the session chanted, “Down with the rule of the Supreme Guide,” in response to the chants and comments from the defendants. This was a slogan used frequently during Morsi’s presidency to suggest that he was not the true president of the country, but rather doing the bidding of the Brotherhood and its Supreme Guide.

Topics
Related
Cairo Court of Urgent Matters
Badie, deputies to be tried on December 11
The Cairo Court of Cassation slated the first session for the trial of Muslim Brotherhood Supreme Guide
emergency law
Being Brotherhood
Heba Afify | Within days of President Mohamed Morsi’s ouster, members of the group from which he hails started