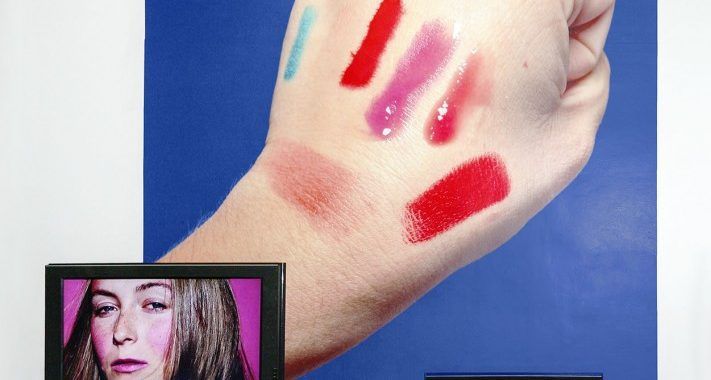 “Any hope for the Internet to make things easier, to reduce the anxiety of my existence, was simply over — it failed — and it was just another thing to deal with. What we mean when we say ‘internet’ became not a thing in the world to escape into, but rather the world one sought escape from.”
— “Post Internet,” 122909a.com

Post-Internet art has loosely been defined as the stuff that happened once the Internet was so ubiquitous in our daily lives that it became boring.

The Contemporary Image Collective’s recent exhibition, “Viewing Copy”, was paradigmatic of that post-honeymoon moment. As opposed to working with the Internet as a medium in itself, it takes a cool, detached look at how our lives are inextricably bound up in and produced by Internet-driven, late-neoliberal systems.

A solo show of two re-mixed artworks by the London-based collective/artist-run space Auto Italia, the exhibition was noticeably sparse (Cairo’s contemporary art spaces are pushing the minimal hanging to the extreme this fall). But the artists compensated for that physical emptiness with aggressively huge, hyperactive images.

Most of the gallery was consumed by “My skin is at war with a world of data,” a re-mix of a video by Kate Cooper, Marianne Forrest and Andrew Kerton that was originally commissioned for Italian art fair Artissima LIDO in 2012. Three screenshots from the video were blown up to several times larger than life-size and printed as wallpaper, covering two walls and one floor of the gallery. The shots captured a woman’s carefully manicured hand delicately holding a small ziplock baggie of fake nails, a clenched fist striped with bright smears of lipstick, and an enormous fuzzy applicator painting viscous lip gloss onto a plump pair of sparkly blue lips, all posed against artificially bright fields of color (burnt orange, neon blue).

The artists also made a short, two-channel edit of the original video. One channel shows a repeating loop of a viscera-colored quagmire that bubbles up and splashes down again, while the other intersperses a short, jerky video clip of a girl’s face moving from side to side, covered in hot pink blush and lipstick. Her mouth moves, but it doesn’t match the voiceover, which narrates a series of maxims relating to the post-Fordist era of cognitive labor and an infinitely networked world.

The second piece was the hour-long video “Double Dip Concession,” another work from 2012 that was recorded live in front of a studio audience at London’s Institute of Contemporary Arts, for which Auto Italia commissioned several other artists to create performance pieces. (Auto Italia first started doing these live broadcasts back in 2010 as LuckyPDF TV, and that initiative deserves another article of its own.)

In her often-referenced essay, “In Defense of the Poor Image,” Berlin-based artist Hito Steyerl talks about the “viewing copy” (the screener DVDs artists send to curators, gallerists and journalists) as circulating in a pirate’s economy of bad copies, blurry videos and other detritus of the visual landscape. With the growing need to circulate images faster and faster, images get more and more compressed to facilitate their travel over the Internet, whereas big, bulky HD files stay protected in the domain of the museum, gallery or artist archive.

“Viewing Copy” is a nice allusion to how the works in this show were brought together (extracted from other contexts, remixed and sent over the Internet to Cairo), but there’s nothing “low-res” about these pictures. Indeed, the impossibility of escaping a hyper-defined reality is the core concern of the exhibition’s wall text. Auto Italia is interested in the other side of the coin: not the pirate’s bad image, but the ad man’s stock image, which is also lightweight and easy to transport, but crystal clear and perfect. While the bad image is often ambiguous because its quality is so degraded, the stock image is ambiguous because it’s so vague, so generic. The same image could be used to signify a multitude of meanings. 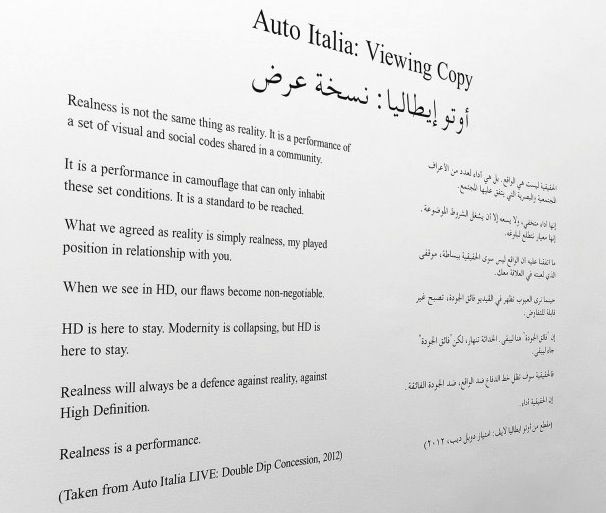 As US artist Parker Ito has said, “[E]veryone and their mom has made art with, and about stock photography.” But the multipurpose nature of the stock image makes it a resource that will never really be depleted, I think. The use of, or references to, stock images in “Viewing Copy” was a little bit hypnotic; the sticky tactility of the various cosmetics, the crisp clean photography, the hyperactive bouncing around of color, sound and words all demanded the viewer’s attention. I didn’t find the work paranoiac, as the artists described it to be in the press text, but it did very effectively underscore our daily participation (willing or not) in an attention economy, wherein attention itself becomes a highly valuable currency.

In some ways, Auto Italia’s hyper-real imagery is part of the same aesthetic trajectory of certain YIBAs (young Internet-based artists) working in this “post-Internet” domain (if that even exists as a category anymore). The monumental images, artificially vivid colors and attention to bodies remind me of the Amsterdam-based artist Katja Novitskova’s 2012 exhibition at New York’s Bard College with Timur Si-Qin. But in terms of tone and conceptual interest, it’s not quite as fun, playful or provocative.

Although they tread some similar territories, “Viewing Copy” was somehow more academic than the formal experiments of the now-defunct collective Paint FX, or US artist Travess Smalley’s mixed-reality aesthetic explorations, or the beautiful, sometimes verging on the spiritual, installations by American duo AIDS-3D. And it was drier than the witty, personal, tongue-in-cheek works that engage with early Internet vernacular and memes, as seen in the practices of the above-mentioned Ito (formerly a member of Paint FX) or US artist and YouTube star Petra Cortright.

The works in “Viewing Copy” are really suited for a white cube gallery, whereas those other examples often seem to have unexpectedly taken the gallery space by storm (which I find more exciting). But that might be a moot point, as it seems Auto Italia was more interested in a semi-clinical look at the economic operations (and ramifications) of what scientist Mark Weiser called “ubiquitous computing.”

Clearly, the exhibition raised a host of provocative issues, but unfortunately it felt like something of a non sequitur here in Cairo. This kind of work is part of a long conversation that goes back to the early discussions about post-Internet art in 2009, and after many exhibitions, conferences, articles and blog posts, those discussions have already transformed into something else.

But that conversation wasn’t held in Egypt at the institutional level, and there are literally only a handful of artists actively working with these issues. So what does it mean for this kind of work to be randomly inserted into Cairo’s visual vernacular?

There has been very little exposure to Internet art in its many varied forms and transmutations, in terms of exhibitions and public events. The now-closed Alexandria Contemporary Art Forum hosted the excellent Cleotronica festival back in 2008, which brought in Internet heavy weights like the brilliant Olia Lialina, but no other event has matched Cleotronica’s impact. Even the huge DI-EGY festival here in Cairo last year was too all-encompassing and too poorly researched to have much actual relevance, and amounted to little more than a spectacle of new media.

CIC’s new artistic director, Alec Steadman, did try to address this issue by organizing a discussion led by Nile Sunset Annex (who also installed the show) that looked at both artist-run organizations and other practices dealing with surfaces and copies. But one talk isn’t going to catch an audience up on a four-year-long conversation that’s already branched out into so many different directions. I’m not even sure what role an arts space should have, generally, in filling in those art historical blanks (this is a very basic question that still vexes all of us engaged in exhibition-making); maybe that’s a job that is better taken on by those of us who write about exhibitions. At any rate, I generally think “Viewing Copy” would have been more impactful if it had been somehow packaged in a more robust discursive framework.

Nonetheless, the project was a smart way to address the challenges galleries face in mounting shows in Cairo — what better way to acknowledge the problems of shipping work in than explicitly looking at digital channels of image dissemination themselves, especially in the context of a city with a thriving bootleg culture that developed due to those exact challenges. In a very conceptual way, “Viewing Copy” somehow embraces “the whole network” that ultimately produced this exhibition. As the late German artist Martin Kippenberger famously said, “Simply to hang a painting on the wall and say that it’s art is dreadful. The whole network is important! Even spaghettini … When you say art, then everything possible belongs to it.”

AD
You Might Have Missed
What we talk about when we talk about trees
Mugamma revisited: Reimagining the building and the square
Where do old lesbians go to die?
Carbon Colonies & A Green New Deal
AD
Ania Szremski
4 articles on Mada

Topics
Related
Ahmed Badry
Doing nothing
Sarah Rifky | #WAYDO marks an interesting moment of collaboration between two types of institution and it stages a
Darb 1718
‘Brain Damage’: A varied and refreshing painting show
Mai Elwakil | 'Brain Damage' emphasizes painting as a living and contemporary medium that can engage the public.
Ahmed Badry
Then, now, and ‘Roznama 2’
Mia Jankowicz | Unless text is truly part of the work, notes like this feel like a conceptual get-out-of-jail-free card
exhibition reviews
Pretty, pretty, pretty, pretty, pretty girls
Ania Szremski | Though the word lazy isn’t really allowed in the art criticism lexicon anymore, frankly that’s what