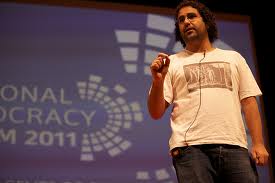 Alaa Abd El Fattah and 24 other defendants arrested during a protest in front of the Shura Council have been referred to the criminal court, lawyer Osama al-Mahdy told Mada Masr on Monday.

The demonstration, held on November 27, was organized to protest against the constitutional committee’s decision to include an article in the draft constitution that allows military trials for civilians. Police violently dispersed the protest in the first implementation of the recently passed, highly restrictive Protest Law, because the protesters had not notified the proper authorities that they would be holding a demonstration.

Over 60 protesters, including journalists and lawyers, were arrested that day.

Several women arrested in the dispersal were taken in a police vehicle to the desert and left there the night of their arrest. Lawyers and journalists were immediately released, but 24 other defendants were remanded to custody for 15 days. Twenty-three were eventually released on LE5,000 bail pending investigations, but detainee Ahmed Abdel Rahman still remains in custody.

On November 28, security forces raided Abd El Fattah’s home, assaulting his wife Manal Hassan and arresting the activist. He has remained in custody since then.

Abd El Fattah and the other defendants are charged with defying the Protest Law, attacking police forces, destroying public property and holding a protest without prior notification, Mahdy said.

“These were the initial charges during the prosecution’s primary investigation, but we do not know for sure what are the final charges based on which the prosecution referred the case to the criminal court. We need to look at the prosecution’s referral order to start speculating how many years of imprisonment Alaa and the other defendants are facing,” he said.

Activists Ahmed Maher and Ahmed Douma are standing trial before the misdemeanor court on similar charges. They were arrested during a protest in front of the Abdeen Court.

Maher and Douma are charged with terrorizing citizens, calling for a protest in violation of the law, thuggery and disturbing the peace.

Their trial has been adjourned to December 22.