Discipline, dread and the estate 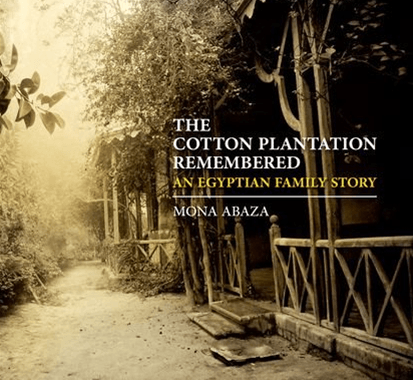 A photo of the late President Gamal Abdel Nasser is one of a few decorations in the office of Mahmoud Sayem, the director of the Spinning and Weaving Syndicate.

Above it is a photo of Ahmed Fahim, one of the godfathers of the syndicate movement in the 1950s.

Almost three years after the fall of ousted President Hosni Mubarak, Sayem is giving a lecture about how important the spinning and weaving industry is to Egypt — which sounds like a textbook example of a Marxist commodity.

Grasping the top of his sleeve, he tells the life story of his linen shirt. He talks about the cotton farmers, ginners, weavers and finally himself, the consumer who bought the shirt. Cotton and its products are something that could reinvigorate the entire economy, he says.

At one point, cotton plantations formed the backbone of the Egyptian export economy and transformed the Nile Delta. In 1931, 60 percent of Delta villages were plantations, and to this day you can’t put your finger on a map of the Delta without hitting a town that doesn’t have “izba” (large estate) in its name. Mona Abaza’s grandfather, Mustafa Fuuda, built his estate two years before that — the subject of “The Cotton Plantation Remembered.”

Abaza, a sociologist at the American University in Cairo, paints a detailed portrait of her family’s control over the izba, and how it evolved from its roots in the colonial period — a period when feudal relationships made sure cotton picked by peasants made it to markets around the globe.

Nasser and labor organizers like Fahim presented themselves as the champions of the peasants against feudalism. While a photo of each political figure hangs in the syndicate office, photos of the peasants do not. But they can be found in the book as they work the same land.

By the end of the 1960s, the state ordered the redistribution of some hundred feddan of Mustafa Fuuda’s estate to several dozen peasants. But Abaza argues that it was open borders and globalization that spelled the end of cotton-producing feudalism more than Nasserism.

In fact, Fuuda and Nasser had much in common. They both had a close relationship with Om Kalthoum, for instance. Fuuda discovered her early on and allegedly helped her reach stardom, which is perhaps why his estate — the da’ira, as Abaza refers to it — was sheltered from strict land reforms after the singer’s intercession with Nasser.

That relationship plays into a more thematic aspect of the book — the control the two men exerted over their respective domains. In spite of Nasser’s relationship to socialism and the miserly capitalism practiced on the plantation, at the end of the day, leadership was about exerting control for both men.

“Discipline and dread were essential in making the da’ira into a successful enterprise that functioned like a perfect machine,” Abaza writes.

Strict schedules, food rations and corporal punishment had their places in both platoon and plantation. The kurbaj, a hippopotamus-hide whip, is mentioned at least six times in the book. Abaza writes that the whip was the “most striking aspect of their recollection.” Even years after the practices of the kurbaj were gone, she felt the legacy of peasants’ deference to authority and power when a peasant wouldn’t look her in the eye.

That brute assertion and consolidation of control may be why those who are old enough to remember the days of growing cotton told Abaza that they were not nostalgic for them. Thousands seized the opportunity to seek work abroad once they were no longer forced to remain on the land. When they returned they found villages that were changing, but that remained forged by the cotton plantation. Light rail systems that crisscrossed the Delta to carry cotton remained, not to mention the fact that their villages were still named after the plantations in which they and their fathers toiled.

That labor is detailed meticulously by Abaza. She defines every role by its Arabic terminology, and dissects pages of accounting documents. At times the descriptions are dry, but she tempers the tone with personal anecdotes from villagers to contextualize the terms, from overseers to kurbaj whips and bookkeeping, in which seemingly countless subdivisons of currency were carefully tracked.

The book is light on these academic aspects, other than using it as a means of organizing the book into topical chapters on labor, management and violence. There is the occasional reference to Max Weber and other sociologists to make sense of Abaza’s family history in a greater context, but she does not describe the plantation through these lenses.

The most evocative vignettes are at the end of each chapter, highlighting the personalities on the farm. One tells of a plantation worker, Atiya, who contextualizes how poor the villagers actually were as he recalls life on the farm. Another describes Abaza’s mother, giving insight into the obsessive control characteristic of her parents — confiscating passports, absolute surveillance and forcing her into two marriages, scarring her for life.

These vignettes — and the whole book for that matter — become even more vivid next to Abaza’s photography, family photos and scans of documents, which are featured on nearly every page. They enable the reader to visualize several aspects of village life, down to the calligraphy in accounting ledgers. In some ways the book is an extension of the author’s photography, which she introduced on the first page as an exercise of mourning her deceased family.

“It all began after my mother passed away some seven years ago,” she writes. “I was desperately trying to communicate with the imagined ghosts haunting the house of this estate.”

The estate quickly decayed after Fuuda died in 1975. The end of his dominance coincided with the breakdown of feudal dynamics in the Delta and the shift in Egypt at large away from top-down control. There was always an absence of authority, if we consider the state to be such authority — authority in the Delta had been enforced by the plantation owners, not Nasser or the king before him. Abaza describes the plantations as “islands of sovereignty.”

Now Fuuda and the other sovereign cotton tycoons are gone, there has been a revolution; today one is even harder pressed to find any sort of coherent authority in the Delta.

In many ways, the story of the Fuuda plantation is the story of Egypt. Authority has slowly but surely been in the process of breaking down. The once powerful state under the control of Nasser has been divvied out to parochial powers. The new vassals are the police, judiciary and local clan leaders, each with its own sphere of influence. The regimented control of the plantation has given way to informality as peasants attempt to provide for themselves in the absence of both the state and the plantation.

“Life,” said Abaza’s mother when she finally broke free of Fuuda, “is not about choices. It is about survival.”

AD
You Might Have Missed
Carbon Colonies & A Green New Deal
What we talk about when we talk about trees
Where do old lesbians go to die?
Mugamma revisited: Reimagining the building and the square
AD
Jahd Khalil
22 articles on Mada

Topics
Related
book reviews
The Brotherhood, before and after
Jahd Khalil | Last year, shortly after the recently deposed Mohamed Morsi was elected president, I met a man who I
book reviews
Review: The 33rd marriage of Donia Nour
Maha ElNabawi | The year is 2048. Donia Nour awakes from her nightly sleep along with greater Egypt’s other 124 million