‘The Square’: An impossible task 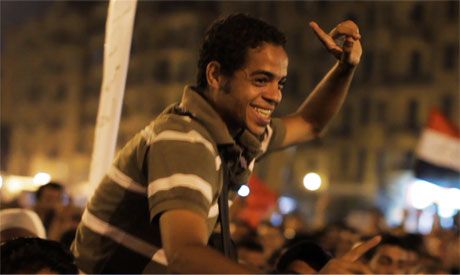 Filmmaker Jehane Noujaim set herself an impossible task with The Square: to tell the story of an ongoing revolution in a feature-length documentary.

There have been at least four versions of the film since January this year — as events continued to unfold, more footage was added. In its different forms, the film has been extremely well-received abroad, winning awards, nominations and critical acclaim.

The final version starts on January 25 2011 and ends at — or just before — the violent dispersal of the two sit-ins in support of ousted President Mohamed Morsi on August 14 this year. It is titled after the square in which, in Cairo at least, it all started — Tahrir.

The film was due to get its Egyptian premiere last week in Cairo’s Panorama film festival, but was postponed at the last minute.

Noujaim used footage shot by herself and others. She follows a handful of activists — most intensively, a charismatic young man called Ahmed Hassan and British-Egyptian actor Khalid Abdalla — and the action almost exclusively consists of protests and clashes on the one hand and urgent conversations in apartments on the other. Sound-bites from two interviews with smug army and police officials are interspersed throughout, as well as the odd snippet from speeches by presidents and their military nemeses: Hosni Mubarak and Mohamed Hussein Tantawi, Mohamed Morsi and Abdel Fattah al-Sisi. There is an emphasis on the importance of video documentation: often we watch characters watching computer screens — showing each other videos of atrocities, or Khalid talking to Skype.

The footage has clearly been filmed skillfully and bravely: the camera runs up with a charge against security forces in the frantic battle on Mohamed Mahmoud Street, it enters field hospitals, it confronts soldiers, it shows military vehicles running people over.

The first half of the film — one presumes the large part of the director’s first cut — serves as a good chronology of the street protests and as such is a useful reminder of what happened in what order. It is also not a bad thing to be forced to watch footage that you haven’t seen since the events, or couldn’t watch at the time.

The characters say things that sum up the mood of each moment. At the beginning, Ahmed, a great central protagonist in that he talks very eloquently using simple language, says “We are all reflections of each other” and “All of Egypt will be like Tahrir.” After the jubilance around Mubarak’s resignation, the characters soon realize that the regime has not fallen: “Our biggest mistake was to leave the square” they say, and then: “We do trust the army, but…”

Protests start against military rule. We relive the shock of realizing for the first time that “the police and the army are standing together!” as someone shouts. Ramy Essam, a singer who also has a strong presence at the beginning of the film, is one of those arrested by the military and tortured in the Egyptian Museum. While the scenes of Essam immediately following his torture are extremely powerful, Noujaim doesn’t pull too much on our heartstrings. (The “virginity tests” happening at the same place and time are not mentioned.)

At this point we see the old electrocution scars of the film’s Islamist character, an often skeptical Muslim Brotherhood member called Magdy Ashour, from his times in prison under Mubarak. His young daughter talks about the violent arrests that used to take place at their house.

Then the film shows the rise of the Muslim Brotherhood. It’s the first time we see praying in The Square. Chants for an Islamic state. Magdy says, “Some Brotherhood leaders make deals with the army.” Ahmed says, “The Brotherhood ruined the sit-in.” People argue about whether the country is ready for elections.

Then there is Maspero, October 2011. The footage of the massacre is very clear, as is the footage of squashed faces of dead people deliberately run over by military vehicles, as is the footage of Mina Danial’s shocked parents, his elderly father looking vacant, lost, unbelieving. It is awful. Hospitals refusing to stamp autopsies. Amid scenes of candles and tears, there is a shot of a military man half-smiling, saying “Who started attacking first?”

The following month, it’s the Mohamed Mahmoud clashes. Magdy joins against Brotherhood orders. Scenes of the violence and scenes of Ahmed, looking white and shaky for the first time, talking to the camera: “People are falling one by one just because they’re saying ‘Down with military rule’,” he says. “Too many bullets … I’m going to explode.” Soon enough he’s hit in the head, the camera blacks out, we’re in a field hospital.

A laughing army official: “The army made the revolution. You kids know nothing.”

So far, so good: not a new perspective on the events, but a fairly gripping and clear narrative of what was happening on the streets of downtown Cairo in the first year of the revolution. It is thought-provoking to rewatch what happened, to remember what you were doing then, to wonder once again at how security forces can be made to crush disobedient citizens. It’s also an unflinching account of the military’s brutalities.

But as things get more complicated, the film simplifies more and there is less footage and less information. We rush through Morsi’s election, through his outrageous constitutional amendments, through the presidential palace protests.

Throughout, there are close-ups of graffiti being made, paint dripping on shoes to the sound of romantic music.

On June 30, 2013. We see foreign television footage of the protests made from a helicopter, with the presenter suggesting that this is perhaps “the biggest protest in history.” We laughed about this at the time, but there is no questioning of this in the film. Ahmed goes out, having apparently decided to put his faith in the military once more. There is no glimpse of those revolutionaries who were skeptical about June 30. We see Magdy saying of the Rabea al-Adaweya sit-in, “Of course there are weapons in the sit-in.” This is also presented as an uncontested truth.

Then, just as you’re bracing yourself for footage of the bloody sit-in dispersal, the film switches to a hopeful song being performed to a crowd in Tahrir Square, before ending. A brief sentence on a black screen mentions that Magdy was “violently removed” from the sit-in, then the music starts again for the credits.

Of course, a narrative has to define the events, and defining is simplifying, and inevitably this will do a disservice to many people who were involved. The film could not escape this inadequacy. But rather than increase it by rushing through the events of the past year, the film should have stuck with the first cut. Perhaps it could have been “Part one” with a sequel to come.

Tahrir Square has long been largely drained of its symbolic power, as evidenced, for instance, by the moving of protests to Ettihadiya Presidential Palace in December 2012. Yet a lot has happened there and it has hosted an incredibly inspiring revolutionary spirit, so it makes sense to make a film about it. But if it is your subject, you must at least acknowledge its darker side. Tahrir has become strongly associated with many things that are not alluded to at all in The Square: mass rapes, xenophobia, violence. What about the long months when homeless people lived in the abandoned square in dirty tents, when it was dark? There wasn’t much outrage when they were cleared out.

Maintaining this air of romance around the square is outdated, if not completely false. The hopeful friendship of Magdy and Ahmed has surely not been able to survive the Rabea massacre. Alongside the abrupt ending, this insistence on romance and unity undermines the strong criticisms of military rule in the first half of the film.

Another failing, perhaps also inevitable in such a project, is the lack of context or questioning around the over-simple, familiar narrative of poor young heroic revolutionaries who did everything right and were disappointed by everyone else. What’s more, not many people were able to be fulltime revolutionaries like these characters appear to be. To offer a wider or more realistic perspective, human rights lawyer Ragia Omran, for example, who has a couple of charismatic cameos, could have been followed more.

The idea of keeping a film alive and changing as times change is exciting and full of potential, but it would have to lose its clear narrative, reflect the complications and chaos of the present as it moves forward. The film in question here is very well-crafted, especially the beginning. But in the end, perhaps it was overambitious and not quite radical, or even revolutionary, enough.

AD
You Might Have Missed
Where do old lesbians go to die?
Mugamma revisited: Reimagining the building and the square
Carbon Colonies & A Green New Deal
What we talk about when we talk about trees
AD
Jenifer Evans  @jniferrl
40 articles on Mada

Topics
Related
Egypt's cinematic gems
Egypt’s cinematic gems: ‘Mr Karate’
Andeel | A film about a convertible driving through explosions, except the convertible is an unemployed youth
Ahmed Zaki
Egypt’s cinematic gems: ‘Against the Government’
Andeel | “We are all corrupt, no exceptions, even with helpless silence, we are corrupt.”
cinema
‘Factory Girl’: A sweet painful unsatisfying triumph
Jenifer Evans | Mohamed Khan's Factory Girl deals with the brutal class system. But his first post-revolutionary movie
Ahmad Abdalla
Breakfast with Mada: Discussing ‘Rags and Tatters’
"Maybe it’s about the revolution, but it’s definitely not about Tahrir or January 25, or the way