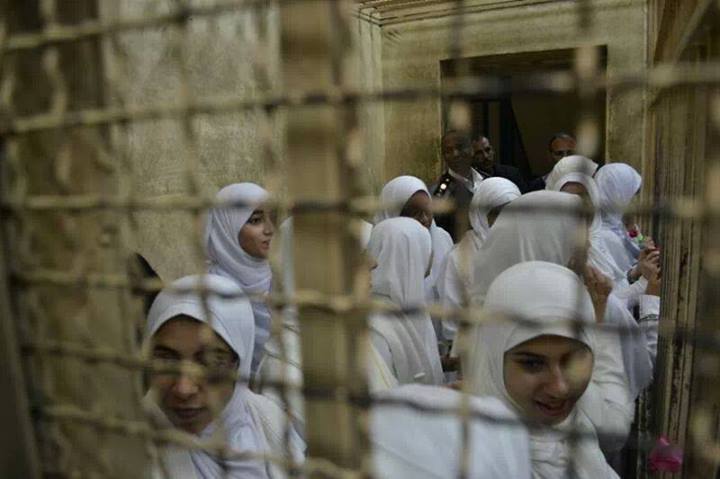 Seven other defendants, all girls under the age of 18, have been acquitted.  The verdict, released on Saturday afternoon, follows a widespread public outcry over the original sentencing of the girls and women to up to 11 years in prison.

Ayman Dabi is a lawyer and the uncle of one of those acquitted, 15-year-old Khadiga Bahaa Eddin Mohamed. Dabi told Mada Masr that he is thankful to the team of lawyers defending the girls, as well as the judges who, he said, “are starting to take solid stances with justice regardless of their personal affiliations or public pressure.”

According to Dabi, the minors are going to be under judiciary probation for three months, during which the judge will be responsible for monitoring their conduct and actions.

“Most of the older girls are university students and their mid-term exams are approaching. We’re glad that they will get to go back to their lives, home with their families. Any other legal actions we may take against this last verdict are still to be determined by the legal team,” he said.

The 21 defendants will remain in custody until their release papers are filed tomorrow morning, according to Dabi.

On November 27, Alexandria’s Misdemeanors Court charged the 21 with illegal assembly, thuggery, vandalism of private property and possession of objects intended to be used to attack civilians. Fourteen defendants over the age of 18 were sentenced to 11 years imprisonment.

The remaining seven defendants were minors, aged between 15 and 17. They were originally sentenced to detention in a juvenile facility until they reach adulthood. The verdict was condemned by a number of politicians and human rights activists.

Mostafa al-Naggar, former member of Parliament, described the original verdict as “suicide of justice in Egypt,” while Ahmed Abdel-Hamid, a member of Al-Daawa Al-Salafeyya, said that the verdict was “a return to the era of dark repression, and threatens to increase tension in the street.”

Meanwhile, the Egyptian Initiative for Personal Rights (EIPR) and the Association for Freedom of Thought and Expression (AFTE) issued a joint statement accusing security forces of employing the same repressive practices as they had under the fallen Mubarak regime.

Judge Ahmed Abdel Nabi of Alexandria’s Sidi Gaber Misdemeanor Court has filed a report to the General Prosecutor complaining about death threats he received after issuing the original verdict, which ordered the women and girls to be jailed. According to the report, threatening text messages were sent to Abdel Nabi’s private phone, and insults were posted on his Facebook page.