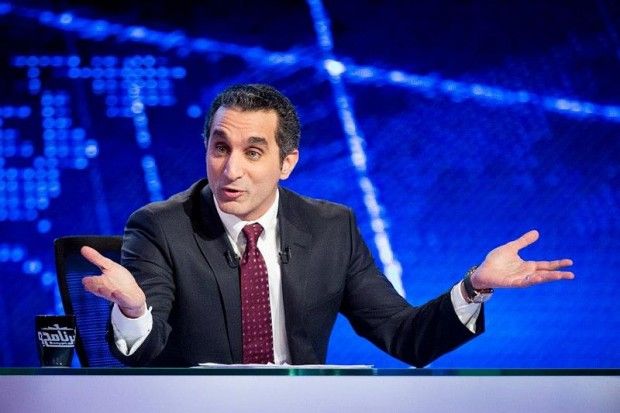 It was Youssef’s first public appearance since CBC abruptly canceled his popular show, “Al-Bernameg,” after airing only the first episode of the season. Fouda himself just returned to the airwaves last week after taking a four-month hiatus.

The comedian was in New York City last week to accept an award from the Committee to Protect Journalists, which was handed to Youssef by American satirist Jon Stewart.

“The joke is funny until you are the joke,” Youssef told Fouda as he explained the difficulties he encountered after airing his controversial comeback episode.

“Egyptians are not a bunch of minors who need someone to speak on their behalf,” he continued. He added that he accepts the fact that not everyone will like the content of “Al-Bernameg,” and is still happy with the number of viewers who still follow his show, even if they’re decreasing.

In answer to criticisms that it’s not the right time to speak out against the state or interim government, Youssef asked, “When is the right time? Give me a date or time.”

He further explained that the two statements CBC made regarding the cancelation of his show made him feel like the channel sold him out. CBC alleged that the comedian insulted the country’s symbols, to which Youssef responded that Egypt’s symbols are its flag and national anthem, and nothing else.

He told Fouda that he had signed a document taking full responsibility for his show’s content, thus freeing the channel and production company Q-Soft from any legal or criminal accountability.

“I feel insulted. CBC cancelled the second show without notifying me ahead of time,” he recalled.

The January 25 revolution and the events of June 30 were too big to be affected by his show, and the fact that some people were concerned that “Al-Bernameg” could do that was disappointing and alarming, Youssef added.

Privately owned CBC suspended “Al-Bernameg” on November 1, claiming that the second episode indicated “the persistence of the producer and the presenter in going against CBC’s editorial policy.”

“Al-Bernameg’s” production company, Q-Soft, announced last month that it had decided to terminate the contract with CBC and take legal measures against it.

Topics
Related
Al-Bernameg
Al-Bernameg will air on an Egyptian channel, Youssef insists
Bassem Youssef’s comedy talk show, “Al-Bernameg,” will soon be aired on an Egyptian or Arab channel
Akher Kalam
Yosri Fouda back on air
After a four-month hiatus, investigative journalist and talk show host Yosri Fouda made his much-anticipated
Al-Bernameg
The politics of silence
Jahd Khalil | Those looking to view coverage from a critical and professional talk show presenter on Egyptian television