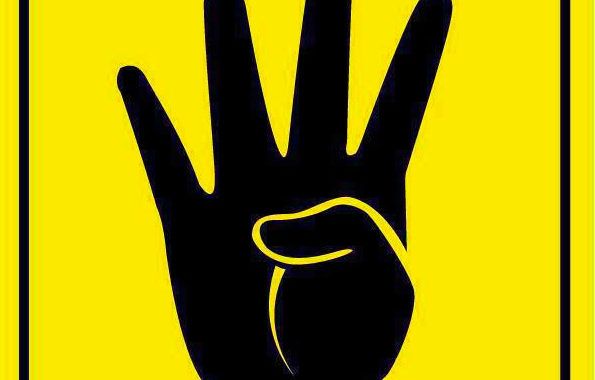 A 15-year-old high school student has been arrested and is being held in administrative detention, accused of “owning a ruler with the Rabea al-Adaweya slogan.” The Kafr al-Sheikh student was detained last week after one of his teachers turned him in to the police.

This is  just the latest instance of authorities’ extreme sensitivity to the spread of  the yellow four-fingers logo, promoted by the Muslim Brotherhood as a sign of solidarity with the victims of the August 14 clearing of the Islamist Rabea al-Adaweya sit-in.

In late October, when Mohamed Youssef made a modest show of support for several friends killed in Rabea, it prompted waves that continue to ripple through the Egyptian social landscape.

Youssef, a multiple-time Kung Fu champion, thrust himself into the national political crisis when, after winning a gold medal in a tournament in Russia, he appeared on the medalist stand wearing a yellow “four fingers” Rabea T-shirt and flashing the Rabea handsign.

Youssef was immediately engulfed in a level of fame and notoriety that far outstripped his significant sports accomplishments. After several days of public debate and hand-wringing, the Egyptian Kung Fu Association served him with a one-year suspension.

Throughout the controversy, Youssef held his ground. He apologized only to his coach and teammates for any hardship he may have caused them, but generally sounded like a man with no regrets.

“I had personal friends, friends since childhood, who died in Rabea. Some people took what I did as a political statement. But the symbol doesn’t mean I belong to a party or a faction. It just reminds me of the friends I lost at Rabea,” he said in an interview with Al Jazeera. “It was a humanitarian gesture, but it was taken negatively. There were lots of accusations that I am not patriotic — why? Just because I had Egyptian friends who died? So when I remember them, that means I am not patriotic?”

Youssef’s gesture took place in relatively obscure circumstances — a low-profile sport and a tournament most Egyptians didn’t even know was happening. But a few weeks later, Egyptian sports officials faced a perfect storm.

In contrast to Youssef, Abdel Zaher was far less publicly defiant in the aftermath. He didn’t give interviews and issued a humble apology through his agent. But that didn’t save him. He was suspended by Ahly, which announced it would sell his contract to another club as soon as possible, and it seems unlikely he will ever play for the national team again. A few days later, a television presenter asked assistant coach Diaa al-Sayed if Abdel Zaher would be on the field for the World Cup qualifier against Ghana. Sayed reacted in horror, saying, “If we called up Abdel-Zaher, we’d be hanged from Cairo Tower!”

“The interesting thing would be if more sports figures are going to try this or if the punishments will deter others stepping forward this way,” he said. “I don’t know if they expected the punishments would be this severe.”

Officials from the Muslim Brotherhood and its affiliated Freedom and Justice Party (FJP) have viewed the controversies with undisguised satisfaction.

“I’m not surprised at all. And it’s going to repeat itself,” said Islam Abdel Rahman, a member of the FJP’s foreign affairs committee.

Abdel Rahman and his colleagues gained enormous pleasure not only from the mini hand-signal spree, but from the hysterical reaction it prompted from the heavily anti-Brotherhood media. Within minutes of the Ahly match, television coverage focused as much on criticizing Abdel Zaher as it did on celebrating Ahly’s victory.

“This ignorant boy who isn’t worth three piastres, the so-called Abdel-Zaher, waved with four fingers! His mother used to feed him burnt bread and was bathing him in the field’s drainage! What a sheep,” ranted the always-dependable Tawfik Okasha of the Faraeen channel.

Abdel Rahman, who is currently living outside of Egypt for fear of arrest, said the media backlash and the harsh penalties for both athletes only serve to strengthen the Brotherhood’s cause and sense of momentum.

“It backfired. It will always backfire. People forgot about the result of the match and just focused on the Rabea sign,” he said. “If they had just ignored it, that would have been smarter. That’s what a smart and secure regime would have done.”

Abdel Rahman echoed Youssef’s contention that the Rabea sign doesn’t necessary mean membership in or loyalty to the Muslim Brotherhood.

“It’s not all political. It’s just non-political citizens who feel sorrow for the Rabea victims on a humanitarian level,” he said.  But the Brotherhood has also heavily promoted the sign for months, making it — rather than pictures of deposed President Mohamed Morsi — the focus of recent protests.

The controversies are very much a product of modern times and the Egyptian passion for social media. Abdel Zaher flashed the Rabea sign for about two seconds, but screen captures immediately began circulating on Facebook and Twitter — ensuring the gesture will essentially live on forever.

The question now is whether this trend will continue and spread. Already there is increased scrutiny of all Egyptian athletes and a fear among the authorities that the athletic ranks might be filled with sympathizers waiting for an opportunity to embarrass the government with a three-second gesture. There has been speculation that the entire Kung Fu Association is under investigation for harboring  Islamist sympathies. And Egypt’s most famous modern athlete, striker Mohammed Abou Treika, was a vocal and public supporter of deposed Muslim Brotherhood President Mohamed Morsi — endorsing him in presidential elections and defending Morsi, even after the constitutional power play that turned much of the country against him.

But sports authorities have taken steps to ensure the trend will not continue or spread. A few days ago, the Zamalek football club passed new regulations that punish players who make “extremist political gestures” with a suspension of up to two years and a fine of up to LE500,000.

Hamid said the real landmark moment would be if a famous singer or actor took advantage of a live camera to flash the sign. But the dangers for someone in that position would be far greater and it seems unlikely that any non-sports celebrities — regardless of their personal feelings or loyalties — would take that risk.

“Sports is the most natural because a player’s personal popularity doesn’t matter as much as their performance and the performance of the team. Anti-coup or pro-Morsi opinions are generally unpopular,” says Hamid. “So if you’re a singer or a movie star, or someone else whose livelihood depends on popularity and their personal brand, then it’s a much more risky proposition.”

In a larger context, outside the world of sports and celebrity, the pair of mini-controversies highlights a stark fact that can only displease opponents of the Brotherhood: Despite the authorities’ zero tolerance towards any display — whether by a high-profile athlete or a schoolboy — of the controversial four fingers, it’s clear the simple four-finger salute has taken on a life of its own and isn’t going away any time soon.  Attempts to come up with alternate hand signals — three fingers that stand for a “third way,” opposed to both military and Brotherhood rule — have not gained much traction.

“The branding aspect has been impressive,” Hamid said. “The Rabea salute has been a real marketing success.”

In the current emotionally charged environment, a quick hand gesture has become a dangerous and subversive act —something the authorities are eager to suppress but which gains potency with each new effort to stamp it out.

Khalil is a Cairo-based journalist and author of “Liberation Square: Inside the Egyptian Revolution and the Rebirth of a Nation.”

AD
You Might Have Missed
Mugamma revisited: Reimagining the building and the square
Carbon Colonies & A Green New Deal
Where do old lesbians go to die?
What we talk about when we talk about trees
AD
Ashraf Khalil
1 article on Mada