Anti-coup alliance holds out hand to revolutionaries
By
Mada Masr 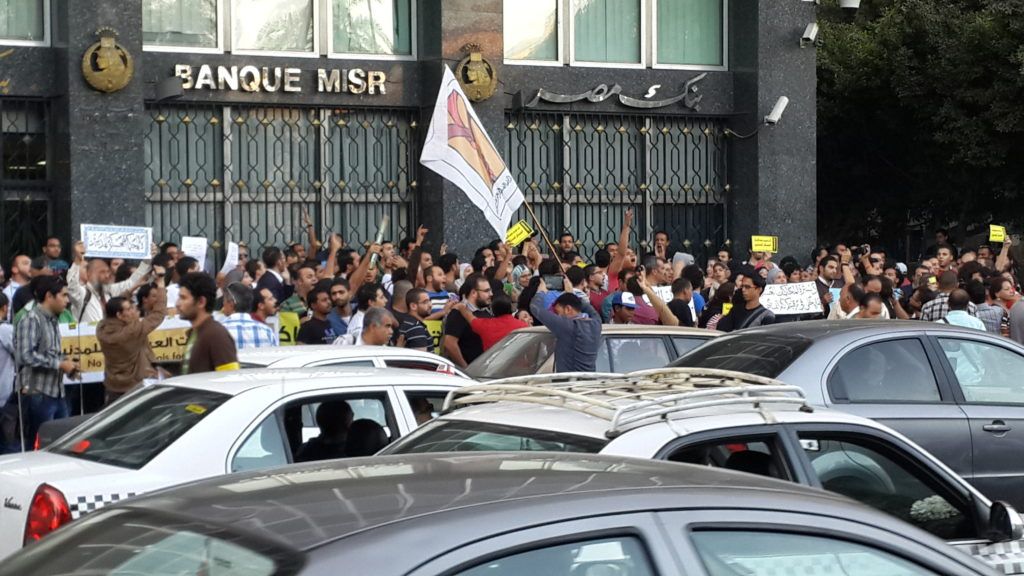 The anti-coup National Alliance to Support Legitimacy declared in a statement Thursday its plans to try and open channels of cooperation with revolutionary forces, following direct confrontations between police forces and revolutionaries who protested a contentious protest law.

The alliance, an Islamist umbrella group founded by the Muslim Brotherhood in response to the ouster of Mohamed Morsi, declared that it was “extending its hand to fellow 25 January revolutionaries with clean hands to take part in revolutionary work at this decisive moment in the country’s history.”

Today’s call, published on the alliance’s Facebook page proclaimed its “complete solidarity” with the group of protesters arrested while taking part in a demonstration against the military trial of civilians on Tuesday. The alliance did not participate in the protest. It calls on political forces to “take a unified revolutionary stance against the powers of repression and tyranny seeking to take revenge against the January 25 revolution.”

Opponents of Morsi’s ouster have become increasingly isolated since the dispersals of Rabea al-Adaweya and Nahda sit-ins on August 14. The Muslim Brotherhood has been the target of an extensive arrest campaign targeting leaders, middle-ranking figures and ordinary supporters taking part in street protests alike.

These frequent arrests have drawn little sympathy from other political critical of the group’s treatment of its opponents while in power, its perceived bias towards Islamist partners and its history of non-cooperation with secular groups during the era of former Hosni Mubarak.

Mohamed Abu Samra, an alliance leader told the privately owned newspaper Al-Shorouk that internal discussions are currently taking place within the alliance about opening channels of communication with youth and revolutionary movements with the aim of organizing joint protests.

Mohamed al-Ibrahim, a member of Thawwar, a leftist coalition formed in September told Mada Masr that the group has no plans for joint action with the Brotherhood.

“There is absolutely no plan for future rapprochement with the Brotherhood. The Front’s general line is obvious for everyone, we are against both powers, the military and the Brotherhood. Both are in a tug of war for power,” Ibrahim said.

“We are against all forms of violence practiced by the Brotherhood either through what they say or what they do, and we are also against the atrocities done by the military against them,” Ibrahim added. “We are always accused of being Brotherhood sympathizers, just because we denounce injustice practiced against them.”

“We are against giving long prison sentences to students and young girls, and we are against random arrests and killings. I guess the recent reactions of the police against our protests in the last two days showed the state’s acknowledgement that we are different from the Brotherhood,” he said.

Coalition opposition group Kefaya — prominent in 2005 and of which the Brotherhood was briefly a member — rejected the possibility of cooperation even more strongly in a statement issued Thursday, saying that the group’s opposition to the Protest Law and the trial of civilians in military courts is “completely unrelated to their disappointing stance.”

“Yesterday you were in power and were drunk with power and you did the same: we took to the streets to protest calling for freedom and against repressive laws and you protest for your own demands, demands specific to your group and its leaders,” the statement read.

The statement also declared, “We will never stand with you in what you are striving for. We tell you clearly: we are against your extremism and against the extremism and corruption of the current regime.”