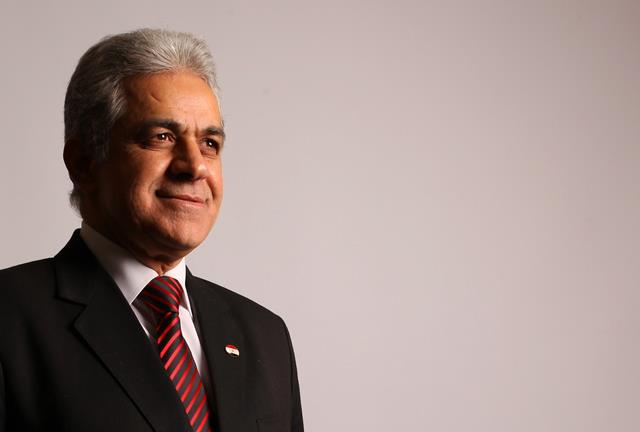 After a failed attempt in 2012, Hamdeen Sabbahi may take another go in the race for Egypt’s top post.

“I will be honored to run in the upcoming presidential elections if there is consensus around me as the candidate of revolutionary forces,” the Popular Current Party leader said on Monday, according to a report published by the state-run Middle East News Agency (MENA).

Sabbahi was speaking at a conference called “The Revolutionary Candidate,” which aimed to garner consensus around one name to contend for the presidential seat.

A dark horse at the beginning of the 2012 election, Sabbahi gained surprising momentum towards the end of the race when the forerunners from the leftist camp — Amr Moussa and Abdel Moneim Abouel Fotouh — suddenly fell out of public favor.

Abouel Fotouh and Sabbahi had been regarded as the two candidates that best represented the goals of the revolution. However, their failure to join forces and run on a single ticket is often seen as a misstep that paved the way for Mohamed Morsi to win the presidency.

When votes were scattered between the liberal candidates in the first round of polls, Mubarek-era Prime Minister Ahmed Shafiq and Morsi emerged as the run-off candidates, forcing voters to choose between a former regime figure and an Islamist candidate. Voters who didn’t necessarily support the Muslim Brotherhood ultimately rallied for Morsi in an act of protest against the man who was the last serving prime minister under Mubarak.

At Monday’s conference, Sabbahi said, “We are all committed to the revolutionary line in hopes of the revolution reaching power. We realize that the road to a modern civil state starts with a democratic constitution … one that protects the economic and social rights of Egyptians.”

He called for an electoral coalition to gain significant representation of revolutionary forces in the upcoming parliament, to “further the goals of the January 25 and June 30 revolutions that rid us of repressive regimes.”

However, Sabbahi’s support for the contentious events of June 30 may disenchant a significant percentage of his former supporters. Some members of the revolutionary youth block that actively supported his 2012 campaign now fall in that minority group that objects to both the army’s intervention in politics and the ousted Muslim Brotherhood-affiliated regime.