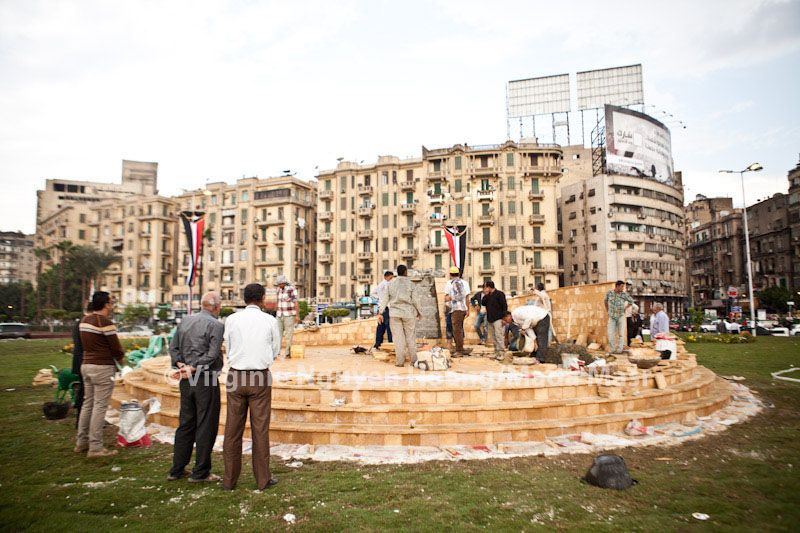 On the eve of the second anniversary of the Mohamed Mahmoud Street clashes, hundreds of protesters marched into Tahrir Square and defaced a memorial the government is erecting to revolution martyrs.

Tahrir Square was closed to traffic for a ceremony earlier in the day during which Prime Minister Hazem al-Beblawi and Cairo Governor Galal al-Saeed laid the first brick of the structure. The memorial and the government’s announcement that it would commemorate the anniversary of the Mohamed Mahmoud clashes have prompted criticism from many who blame the state and police for protester deaths.

On November 19, 2011, clashes raged for four days between protesters and Central Security Forces, leaving at least 40 people dead. An attack by the military on protesters during those four days also resonated with the public, who remember images of military police dragging dead bodies and stacking them near a pile of garbage.

On Monday evening around 200 protesters gathered in front of the house of Gaber Salah, aka “Jika”, a 17-year-old shot dead during a march last year commemorating the 2011 protests. The group surrounded Salah’s house in downtown Cairo and stood on the balcony raising a white flag that bore his picture. Demonstrators then marched to nearby Abdeen Square, chanting against the police and the military, which they hold responsible for his death.

“Never forget, always remember, the Ministry of Interior killed Gaber,” they chanted. “Mohamed Mahmoud is a witness; we were lions in the face of treachery.”

A stage was also set up in Abdeen Square where families of those killed can give speeches.

“Today we want to commemorate our martyrs. This day commemorates our resistance and the shame of the Interior Ministry and the military and the Muslim Brotherhood’s betrayal of us,” said activist Khaled Yassin, member of “We are all Jika” movement.

Meanwhile, police and military forces dispersed a similar protest organized by the April 6 movement near Sidi Gaber in Alexandria. Activists said dozens were arrested, including members of the Nasserist Popular Current Coalition.