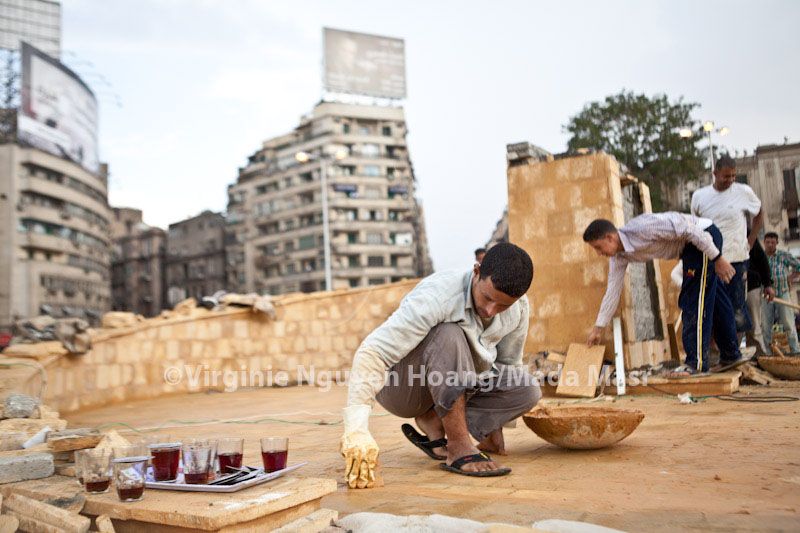 A monument commemorating the revolution’s martyrs will be inaugurated in Tahrir Square on Monday.

Prime Minister Hazem Beblawi announced in October that the Cabinet had assigned the governor of Cairo to plan the building of a monument in Tahrir Square “commemorating the martyrs of the two revolutions of January 25 and June 30.”

Recently, grass was grown again in the garden in the middle of the square. The area had been left bare, barring the occasional resodding, over the past two and a half years of intermittent protests and sit-ins. The garden’s soil was soaked with blood of protesters killed under the watch of different governments since the start of the revolution in 2011 is now bright green again, and a monument is rising in the middle of it.

The National Salvation Front announced that it would participate in the inauguration of the monument on Monday.

“This monument is a symbol that Egyptians were able to change their reality after they had accepted it for 30 years, it proves that these people are alive and will never go back,” George Ishak, leading member of the Front told Mada Masr.

Olfat Mohamed, whose son Islam Abdel Wahab was killed in Sayeda Zeinab on January 28 2011, is happy that something is being done to commemorate the martyrs’ memories, however she does not believe that it is meant for her son.

“I can’t go, what does this monument represent? Who does it represent? Of course the government will aim it at the martyrs who are being talked about now and not those who were forgotten,” she says.

However, she still hopes that when tourists come and see the monument they will be reminded of her son and those who died with him.

Mohamed says that she feels that the June 30 demonstrations overshadow the initial revolutionary wave of January 25, and that her son and the others who died in 2011 were forgotten.

As for retribution, which martyrs’ families want much more than a monument, Mohamed says she has lost hope.

“We don’t know who killed them and now that the police and the military are one hand, our rights are gone forever. Only God will give us retribution. We are the vulnerable people and they’re stronger than us,” she concludes, after two years and a half of waiting.

Among the comments on pictures of the monument on social media, some who oppose the current government considered the monument to be an attempt to create a distraction from what they called “the bloody coup” that removed Mohamed Morsi from power.

Many activists reacted to the news with concerns that it is a part of an ongoing campaign by the government and military rulers to put a closure to the revolution and discourage further street action to protest the current situation.

“There is a systematic effort to falsify history, which includes the building of the memorial, and named streets after martyrs like Jika and Cristy,” says activist Nazly Hussein.

Hussein also sees the monument as an attempt to blur the lines between the January 25 revolution which is more widely acknowledged as a revolution of the people, and 30 June which remains controversial as some consider it a revolution and others a military coup.

“They want to say that we have martyrs and you have martyrs, we’re all the same and we’re together now.” she says. “This could have been accepted if there was retribution against their killers.”

Topics
Related
deep state
Between January 25 and June 30
Mai Shams El-Din | Three years, two overthrown presidents and a lot of “million-man marches” in between. But between
June 30 protests
In Tahrir, protesters out to save the state
Maha ElNabawi | A few thousand gathered in Tahrir Square on Sunday morning, where a festive mood reigned ahead