I don’t want to add to the snake oil-salesman reputation of curators, but art people are always talking in one way or another about a “crisis” — of representation, for example, or ethics, or some other noble yet nebulous concept — and then coming up with exhibitions that claim to face up to it. It’s an inevitable feature of a profession that is constantly called upon to justify its existence. Declarations of institutional self-awareness are an essential feature of the art gallery arsenal these days.

In this context, you’ve got to have a really good crisis going on if you want to sound fresh. Egypt can definitely tick that box. Nearly three years of intense political change, sporadic violence and the wild undulation of revolutionary hopes build heavy psychological fallout. On the level of art making, the more politicized questions of representation and participation in relation to the events of 2011 are giving way to a longer-term set of questions around psychological survival. Not, “What are we making?” but now, “How are we even making it?” On the level of authentic artistic crises, it’s a humdinger. So how can we avoid this being yet another grandiose, yet ultimately irrelevant curatorial obsession?

Townhouse curator Ania Szremski’s response is to recognize that grandiosity might not have anything to do with it. The 2005 book “Ugly Feelings” by Stanford University professor Sianne Ngai becomes the primer for an exhibition of the same title, and the focus moves to the petty.

The exhibition’s press release talks about “emotional states that reflect a lack of agency. Anxiety, irritation, envy, lethargy — the kinds of feelings that are vaguely uncomfortable, sometimes difficult to justify, and usually dismissed as relatively banal, despite their pernicious power to prevent the emotional subject from acting.” This inability to act, and its associated feelings, is taken by Szremski as analogous to the questions faced by institutions and artists during these times. It’s particularly relevant to Townhouse, as a cornerstone of the Egyptian art scene, as it enters its 15th anniversary celebrations.

The exhibition centers around “I’d prefer not to,” a text written by Szremski that you sit and read on a computer screen in the gallery. In this text, she lays out both the immense practical issues of making exhibitions in Egypt at this point, including restrictions on budget and shipping that make showing many works almost impossible. She also outlines immaterial issues, defining terms like “disconcerted” to convey the curatorial sensation that, in these times, almost any way of working is either impossible, irrelevant or a false step. 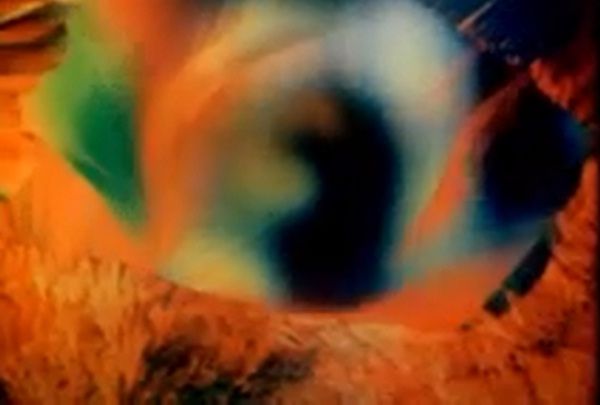 The pieces in the show relate to it almost like hyperlinks. The show’s big hit seems to be the video “Auroratone,” a 1940s therapeutic tool made by the psychotherapist Cecil Stokes which, after much scientific research, was found to be the most effective combination of image and sound to soothe sufferers of psychotic depression. It has gently psychedelic fields of color and morphing shapes, accompanied by a sad song by Bing Crosby that floats wistfully through the gallery. Aside from its calming beauty, and the underlying nerdy pleasure of encountering such an artifact, there’s something beautifully raw to finding this piece in an art exhibition. Is this what things have come to? Instead of artworks, we get therapy? And why does it feel so good?

The lush cocoon it produces is belied by the defiant ugliness of the early, hyperlink-based net art on display. In “My Boyfriend Came Back From The War” (1996) by Ola Lialina, the viewer is invited to click through an associative series of links and low-res images that appear to describe the state of a relationship, but never give you the conclusive story. The datedness of the web design contrasts strongly with the emotive sensations implied by the story, coloring this romance in tired black and white pixels. 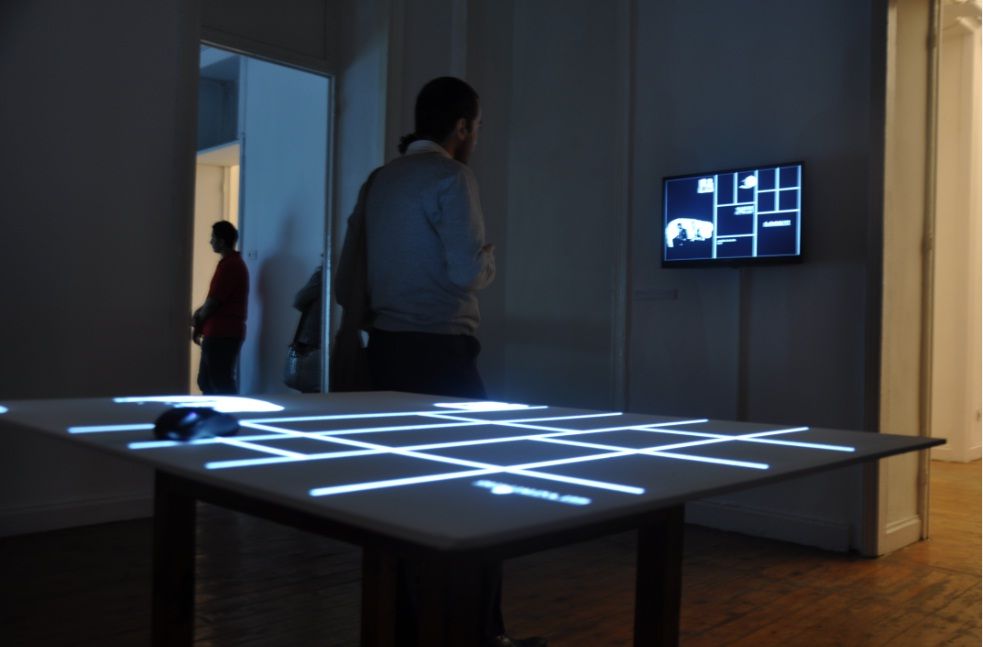 ‘My Boyfriend Came Back From The War,’ installation view

The associative approach of the show occasionally lapses, most notably in Sebastian Alvarez’ video “Moving Excerpts” (2010). Here, a masked figure gesticulates as if he is the speaker of the video’s several voiceovers, discussing broad issues around language. The over-hyped gestures and the blank mask add a cynical tint to the warmth of the speakers’ voices, and there’s a powerful effect of alienation. However, the topic of language produces huge misdirection, and you’re left wondering if there’s some topical connection you’ve failed to make with the show.

Artists fill only a portion of the exhibition. There’s a lot of low-rent “non-works” – YouTube clips, wall texts, remakes — an inevitable trend when budgets are limited. This opens up all the pop appeal and lateral connections that can happen when you show non-art media. One YouTube video instructs you on how to fake key facial expressions. These things, along with the alien and dry tone of some of the artworks, contribute the sense of an irritant, a bitsy and hollow feeling, common to artificial sweeteners and zero-budget shows.

In my view, the show escapes these problems because it presents no band-aids whatsoever. All this performed curatorial honesty and prodding of emotional sore spots might, in time, get tiring, but it sets an important agenda for this moment. After all, the comparatively solid creative quality of the “Auroratone” also makes you hunger deeply for those crafted things, with aesthetic agendas and inimitable processes, that we call artworks. That is both the conscious failing of “Ugly Feelings” and possibly its most powerful point — a highly political one, at that. Among all these materials, we need artworks. Their replacement by cutesy, fascinating online detritus, like a faked facial expression, adds to the overall evocation of “ugly feelings” in itself.

The literary maxim of “show, don’t tell” is surprisingly hard to create in curatorial work — even harder when the spine of the whole exhibition is a curatorial text that deliberately dictates the agenda. Yet it happens here. This is an exhibition in which you’re never entirely sure if your reaction is down to the qualities of the works, or the condition of your soul. It will be interesting to see what tack is taken by the accompanying film program, “Precarious Cinema,” of which there are two more remaining events.

There is irony here, in the question of honesty. Ugly feelings, unlike noble ones like anger and love, cannot declare themselves openly. Nobody beats their chest shouting “I have a petty resentment!” As Szremski’s text deploys such comparatively fearless honesty, I can’t help noting that this is a very clever way to sidle back into the territory of grand ambitions. If this is the starting pistol of Townhouse’s 15-year anniversary projects, it’s both a joke gun with a flag that says “pop” and a great big resounding cannon.

“Ugly Feelings” is on at Townhouse through November 20. Note: Ania Szremski is a staff member at Mada Masr.

AD
You Might Have Missed
What we talk about when we talk about trees
Where do old lesbians go to die?
Mugamma revisited: Reimagining the building and the square
Carbon Colonies & A Green New Deal
AD
Mia Jankowicz
12 articles on Mada

Topics
Related
Beirut in Cairo
‘A Guest Without a Host is a Ghost’
Malak Helmy | Out-arting the art with artful narrative does not, ultimately, do anything for the actual artwork in
Aleya Hamza
Gypsum Gallery launches with beautiful Setareh Shahbazi show
Maha ElNabawi | "What I’m hoping to do is show contemporary art that is a bit more progressive and critical, but in
exhibition reviews
Pretty, pretty, pretty, pretty, pretty girls
Ania Szremski | Though the word lazy isn’t really allowed in the art criticism lexicon anymore, frankly that’s what