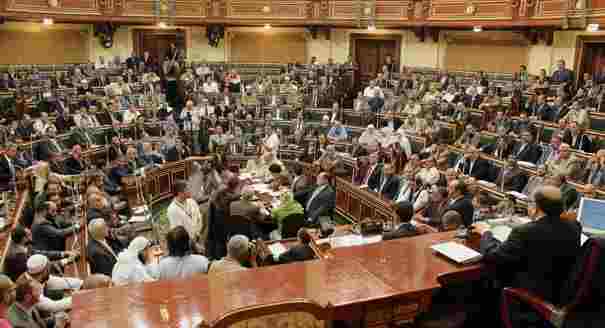 Most coverage of Egypt’s constitutional redrafting has centered on the issues making their way into the amendments that the body will eventually draft, rather than process itself. The document’s quality will eventually reflect how strong the process of writing it was, and so far indicators are not promising, observers say.

For them, looking past the constitutional questions of Islamic Sharia, the position of the military, the independence of the judiciary and freedom of expression, Egypt’s constitutional redrafting is rushed and taking place without sufficient expertise or buy-in past the Egyptian elite, and at times it doesn’t even gain the full attention of those making amendments that in principle should be built to last.

The discontinuity and abundance of constitutional drafts since the 2011 revolution have also been criticized in Egypt, as constitutional experts slam what is perceived as a trivialization of governing documents by amending the constitution so frequently. The current process is the sixth constitutional change since January 2011.

Zaid al-Ali, an expert on constitution writing with the Institute for Democracy and Electoral Assistance, criticizes the discontinuity in the constitutional writing process and the constitution’s complete divorce from its predecessors, including the 1971 Constitution that was abrogated with President Hosni Mubarak’s ouster in 2011.

Discontinuity also marred the work of the 10 legal experts tasked with amending the 2012 constitution before passing it on to the 50-member committee. A crisis unfolded after the larger body took the liberty to disregard the work of its predecessor, especially with regard to judicial issues. And for outsiders, the fact that the smaller committee of legal experts was asked to look at the draft before a broader committee of politicians and public figures is counter-intuitive, since its work should rather have been a follow-up, technical fine tuning of the 50-member committee’s draft.

Another critique of the current drafting is its fixation on countering the 2012 constitution, which is perceived as a largely Islamist document. With the ouster of Morsi in July, a process of active undoing of his one-year rule unfolded, with reversing its effects on the constitution as the most significant undertaking on the legal front.

The July 8 Constitutional Declaration still ascribed a degree of legitimacy to the 2012 constitution by mandating that it be amended rather than scrapped. And while this can practically be overridden by extensive amendment, there is a degree of societal legitimacy, says Yussef Auf, a constitutional advisor for the committee.

For Auf and others, the quest to undo the 2012 document leaves little space for genuine political negotiation. And the question is exacerbated by the lack of a public debate around the process. For one, the committee has decided to close some sessions to the media in order to prevent conflicting reports, according to the committee’s spokesperson, Mohamed Salmawy.

This leaves the public with nothing more than knowledge of the general debates, and leaks of the disputes that flare up between members, with little insight into the language of the new amendments. The drafters say they do not want to confuse the population at large, but in a committee that is mostly composed of elites and state institutions appointed in an opaque vetting process, critics see that the everyday Egyptian will have little input until he or she marks yes or no next month.

The timeline is also an glaring issue. Other than limiting the committee’s mandate to amend the 2012 constitution within 60 days, the July 8 Constitutional Declaration gave little indication of how the body will get there.

The representatives immediately identified this as a problem, and consequently interpreted the decree as 60 working days, excluding weekends and public holidays. They even decided to have a five-day workweek rather than the six-day timesheet most state institutions work on.

Even with that extension, Ali, who has been following the constitutional debate in Egypt since early 2011, says that the rapidly approaching deadline precludes any sort of meaningful drafting process and complicates even the most diligent members’ efforts.

These public intellectuals and elites still have not abandoned their own commitments. They are juggling the task of writing a governing document for a country in the throes of massive social upheaval and violence, but are still running their research labs, writing novels, and teaching university courses.

At least one member is receiving emails and text messages throughout drafting sessions, rather than focusing on the sessions at hand, inside sources told Mada Masr.

“They have many work and other commitments at one time,” says Auf. “The result of this is that I don’t think they have the time and the mind to think about issues.”

The result is looking to be extremely vague, rather than thought-out enough to sufficiently tackle somewhat foreseeable structural issues that other countries have seen in transitions to free and fair democratic order.

The compressed time period and consequent vagueness creates space susceptible to authoritarian rule, says Ali, citing the example of speech regulations and independent auditing institutions. If important details are left out, he says, the executive will likely be able to bypass codified protections and checks on power.

“A few years down the line when the political process takes control, domineering political parties, and domineering presidents, the one thing they hate in the world is an independent audit institution. You can bet your bottom dollar that without strong protections in the constitutions, they’ll ride roughshod over it.”

And how much this will matter in the shadow of an all-powerful military complex could render this all moot in the end, argues Heba Morayef, the Egypt director of Human Rights Watch.

“I think the process has been untransparent, nonlinear, and the broader political context has been an extremely problematic one and it hasn’t been inclusive. Having said all that neither was the last experience,” she says. “In a sense I feel like this assembly is repeating many of the mistakes of the Morsi area. This has always been an exceptional process.”

AD
You Might Have Missed
Where do old lesbians go to die?
What we talk about when we talk about trees
Carbon Colonies & A Green New Deal
Mugamma revisited: Reimagining the building and the square
AD
Jahd Khalil
22 articles on Mada

Topics
Related
2013 Constitution
As clock ticks down on finishing constitution, committee still deeply divided
With a looming December 3 deadline for the final draft of the new constitution, there are still “deep
History
History reconstructed: Rival realities in Egypt
Sarah Carr | Writer Maria Golia once described Cairo as a city held together by rubber bands in its teetering chaos.