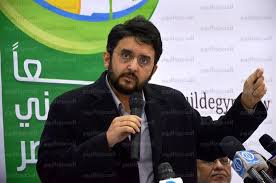 Within days of President Mohamed Morsi’s ouster, members of the group from which he hails started reliving the kind of political alienation and oppression that marred the reign of his predecessor.

Society began to feel the return of the police state, exemplified by the imposition of emergency law and arrests of journalists, foreigners and others deemed dangerous to the state. With the Muslim Brotherhood as the prime target of the state crackdown, late night visits by police and jail time became customary again for Brotherhood members and their families.

Gehad al-Haddad was the most recognizable face of the Brotherhood in foreign media after Morsi’s ouster on July 3 — and the most criticized.

Constantly defending the group’s acts during its time in power, Haddad was slammed for spreading false information throughout the crisis surrounding Morsi’s ouster, and some accused him of conspiring with foreign powers.

Haddad was arrested on September 17, and the charges against him include belonging to a terrorist group, publishing false news that threatens national security, and murder.

The last time his family saw him, his wife Basma Abouzeid says, was two days before the dispersal of the Rabea al-Adaweya and Nahda Square sit-ins on August 14, when he and her father, Brotherhood Guidance Bureau member Mahmoud Abouzeid, decided to go in hiding, fearing arrest.

Basma Abouzeid followed the rising number of casualties as the sit-ins were dispersed, unaware of her husband’s and parents’ whereabouts. The last time she spoke to Haddad was that night, when he called to reassure her he was safe.

As security forces started rounding up Brotherhood leaders, her father and her husband abandoned their phones, suspecting police to be monitoring them, and did not disclose their hiding place to their family.

Abouzeid says that for a month the only communication she had with her husband was two e-mails in which he told her about the procedures she should follow in the event of his arrest.

Since the dispersal of the sit-in, Abouzeid’s life has been a page out of the Mubarak textbook, she says.

Every time she hears the elevator going up to her floor in the middle of the night, she fears that it is the security services.

This is a fear she developed during her freshmen year in college — the year her father was sentenced to three years in prison in a military tribunal on charges of attempting to overthrow the regime.

During a prison visit to her father in 2007, the 24-year-old American University in Cairo graduate met Haddad, with whom she now has two children: 4-year-old Nour and 1-year-old Aly.

Abouzeid says she did not wear a wedding dress — she married Haddad in prison so her father could attend.

“When my dad was hugging me goodbye on the day of my wedding, as we left the prison, I experienced a feeling of injustice that I never felt again until these days,” Abouzeid tells Mada Masr.

Abouzeid says that the injustice that her family currently faces is worse than what they experienced under Hosni Mubarak, especially as the security crackdown is supported by a media campaign and general lack of empathy towards the group.

When Haddad was rounded up last month along with Abouzeid’s father, gloating and celebratory messages flooded social media.

Abouzeid believes that while the Muslim Brotherhood detainees under Mubarak were considered political prisoners, they are now dismissed as terrorists who deserve whatever happens to them.

During the month her father and husband spent in hiding, she and the rest of the family were monitored by security forces trying to locate their family members.

She says she noticed a plainclothed officer always present under her grandmother’s house where she was staying. While running errands with her mother and two children she noticed three cars following them everywhere, alternating with each other.

When she found out through the media that her father and her husband had been arrested, she had mixed feelings.

“My husband is the most important thing in my life. When he was arrested, of course I was worried about him, but I was also relieved that at least now they would stop following us and no one would hurt my children. I felt that he can put up with jail, but they can’t,” she says.

The family found out their whereabouts a day after their arrests, but were not allowed to deliver clothes to them at Tora Prison. Abouzeid’s lawyer told her that her husband and her father are each in solitary detention and are not allowed to leave their cells for the hour per day that other inmates get.

The family says that with the collapse of the security apparatus in the wake of 2011’s January 25 uprising, they did not imagine their lives would once again be interrupted by security after only two years, and this time welcomed by many.

Abouzeid worries that teachers will mistreat Nour if they knew who her father is, and that other children will repeat what they hear about her father in front of her.

“With the amount of hatred that we’ve seen, anything’s possible,” she says.

Indeed, the polarization and practices of exclusion that are sweeping society seem to be transmitting from parents to children.

Earlier this month, Amr Farouk posted on Facebook scans showing a double fracture in the arm of his 10-year-old son, Yehia. Farouk said Yehia sustained the injury, which will require an operation, because three classmates beat him when he objected to their singing an improvised song titled “Morsi is a Thief.”

“I’m now facing an ethical dilemma,” says Farouk. “What do I tell my son about his 10-year-old colleagues who denied his humanity and legitimized their assault on him just because he holds a different opinion? How do I teach him to love them and be loyal to them? How do I teach him that Egypt is for all Egyptians and that these kids now celebrating the defeat of their colleague ‘the terrorist’ are not bad people but only misguided?”

While even mere sympathizers with the group suffer some backlash, those directly involved with the Brotherhood and their families have had their lives turned upside down since Morsi’s removal. Their circumstances further deteriorated after the violent dispersal of the pro-Morsi sit-ins on August 14. Accusations of terrorism against the group intensified and sweeping arrests of its members began.

A woman who prefers to remain anonymous tells Mada Masr she was forced to leave the country because of the government’s increasing harassment of her family, even though her only link to the group is her father-in-law, a member.

She says the government’s actions made it impossible for her husband to operate his business, and she decided it was better to deliver the baby she’s carrying abroad to give it another nationality.

She adds that watching society condone the injustices done to her family and others has affected her in a much deeper way than the crackdown itself.

“I used to feel that getting another nationality is like betraying your country,” she says. “Now I feel that my country has betrayed me. If my child decides to follow the footsteps of his father and grandfather he won’t be safe, so I felt I needed to take a precaution.”

She plans to continue working for Egypt from abroad and to return when the restraints on her activity in the country are lifted.

“They’ll never succeed in making us feel that this is not our country or that there is no place for us here,” she says.

As far as Nour is concerned, her father is away on business and too busy to talk on the phone.

“I set up an email address and told her that whenever she wants to tell her dad something we will write it together and send it to him,” Abouzeid says. “She started taking pictures of her drawings to send him, and I would reply as him and send her pictures and videos of them together.”

AD
You Might Have Missed
Mugamma revisited: Reimagining the building and the square
Carbon Colonies & A Green New Deal
Where do old lesbians go to die?
What we talk about when we talk about trees
AD
Heba Afify
117 articles on Mada

Topics
Related
Hosni Mubarak trials
The trials
Timothy E. Kaldas | The trial of deposed President Mohamed Morsi will almost certainly be a show trial and is of
book reviews
The Brotherhood, before and after
Jahd Khalil | Last year, shortly after the recently deposed Mohamed Morsi was elected president, I met a man who I
Mohamed Morsi ouster
The Brotherhood’s downfall (part 1)
Ashraf El-Sherif | The fall of the Brotherhood is the rational outcome of the group’s political, organizational and ideological