A rock-climbing trip in Dahab 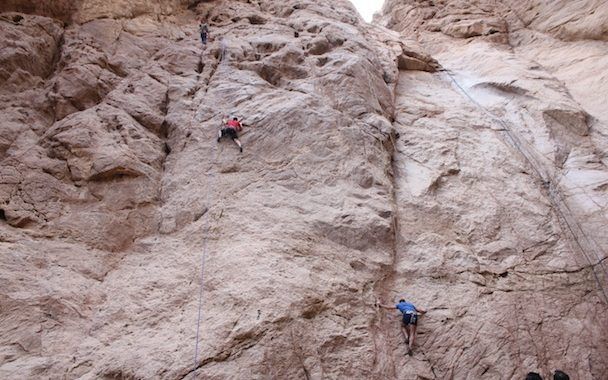 Dahab in South Sinai is world renowned for its rich marine life and water sports, but there’s more to the small city than its sea. Dahab’s desert is the perfect place for beginner rock climbers.

Twenty minutes into the desert surrounding Dahab City, there are mountains ranging in size and inclination that allow for different levels of difficulty and the added pleasure of a night’s camping.

The valley where we camped for our first rock-climbing experience was in itself a treat. It was small and completely surrounded by mountains except for one small opening, from which you walk into what feels like a big cave with the gorgeous star-studded sky as its ceiling.

Our guide, Karim, prepared the rock-climbing harness on three different parts of the mountain with different difficulty levels. Every climb would go approximately 30 meters high.

Karim is an interesting person. He spent most of his life studying and working in the corporate sector in London and when he came back to Egypt he went straight to live in Sinai, determined to avoid what he described as Cairo’s soul-crushing effect.

Having such a free-spirited guide added to the fun of the trip, but there was one downside: he didn’t bother much about safety.

One of my friends got overexcited and decided to go on a free climb over the steep mountain with no safety ropes. Going up was a bit dangerous. Coming back down was nothing short of life threatening.

Karim didn’t blink while the rest of us held our breaths watching our friend’s life hanging on small bumps on the mountain that he used to step all the way back down to the ground.

Also as part of his free-spirited approach, Karim let one of our friends with one previous rock-climbing trip under his belt handle one of the safety rope stations.

The way the safety ropes work is that one end is attached to the climber and the other is attached to someone on the ground, typically an expert rock climber. In our case, however, it was anyone who wanted to give it a try. The person on the ground balances off the climber’s weight to keep him from falling and gradually releases rope to give the climber space to go up.

Before you make your first attempt you need to have a realistic expectation of how you will look. Rock climbing may bring pictures of the opening scene of Mission Impossible 2 to your mind, but some of us will look more like a giant reptile clutching on to the mountain.

I went for the rope at the intermediate difficulty level, which was manned by my inexperienced friend. Standing in front of the mountain trying to find a crack to take my first step felt like standing in front of a wall. Luckily, there are ways to cheat. Every time I got stuck, my friend pulled the rope, hoisting me up.

It’s hard for first-timers to trust that the tiny cracks in the mountain are enough to fit their feet and support their body weight as they jump up to the next spot.

Usually, most of the time that the first climb takes is spent in negotiations between the climber, who refuses to let go of the mountain and take the next step, and the people on the ground convincing him or her that some little bulge in the mountain is enough to step on.

Even though I knew I had a rope holding me up and that when I slipped I’d only be suspended in the air, every time my foot slipped, my heart dropped and I let out a loud cry. After all, I was falling off a mountain, for a fraction of a second.

The first step towards going back down requires a bit of faith. The climbers need to stand up, perpendicular to the mountain as the rope holds them in place. The person manning the rope then releases it gradually for the climber to walk backwards down the mountain all the way to the ground.

Once you’ve gathered the guts to take the first step, it’s the most enjoyable part of the climb. With the mental and physical effort it takes to climb up out of the equation, you can enjoy hopping down the mountain once you’ve trusted the rope enough to let yourself go.

During my climb, this joyful phase was interrupted as I found myself in a short freefall when my amateur rope holder let go of too much rope. Thankfully he regained control of the rope. A second later, everyone says, although in my head I was falling for much, much longer.

Topics
Related
Mount Sinai
Missing the sunrise on Mount Saint Catherine
Heba Afify | If you’re planning on climbing Mount Catherine, this is your warning: It is cold and it is exhausting.